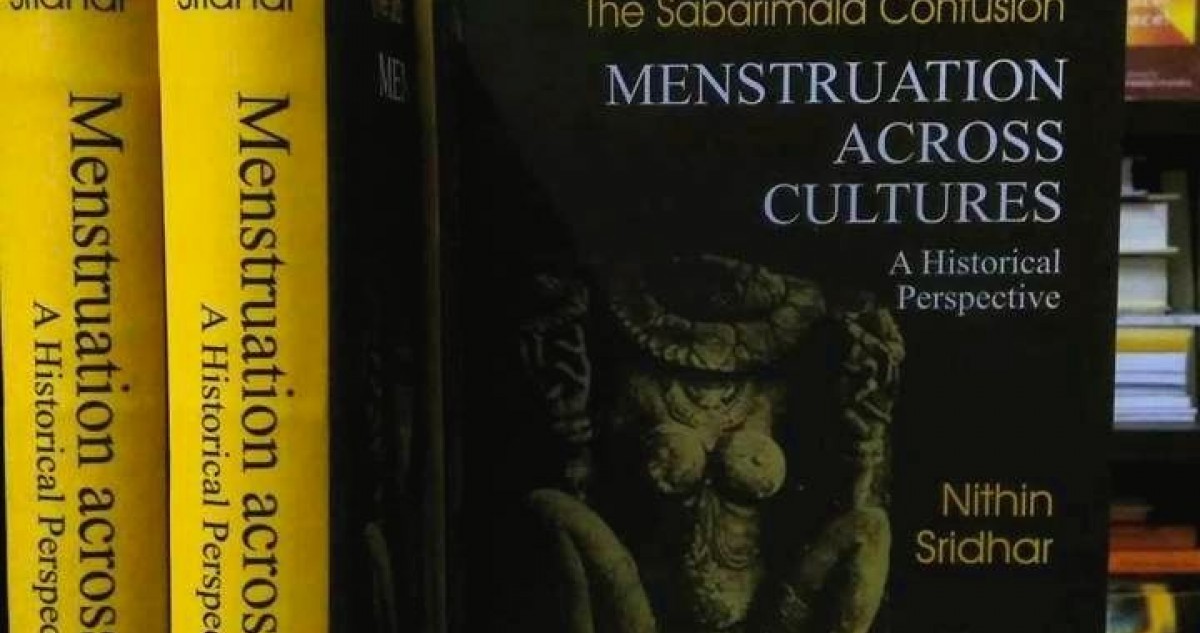 Nithin Sridhar’s latest work, Menstruation across Cultures: a Historical Perspective, discuses, well, menstruation — a process so very commonplace and ordinary for women, yet so sensitive that it is difficult to discuss it openly. For Nithin to attempt a deliberation on this subject is rather bold (then again, he jokes of his penchant for the unmentionables); to endorse the sacred-traditional Indian stance on the subject, bolder. Because a quick glance at the list of available works on menstruation —‘The Curse: a Cultural History of Menstruation’; ‘The Curse: Confronting the Last Unmentionable Taboo, Menstruation’; ‘I’ve Got My Period. So What’; ‘It’s Only Blood: Shattering the Taboo of Menstruation’; ‘Heavy Flow: Breaking the Curse of Menstruation’, etc — betrays that there is only one ‘acceptable’ stance on the subject: to wish to ‘shatter’ and ‘break’ the ‘taboos’ of menstruation, to erase as much as possible the experience of menstruation. Nithin’s work, then, stands out as a serious, thoughtful engagement with the different, diverse perspectives on the subject — an attempt (the first?) to understand, rather than confront, the ‘taboos’ of menstruation.

The first (and major) section of the book deals with the position of sanātana dharma on menstruation. Drawing from an exhaustive list of primary and secondary sources, Nithin shows that there is not a simple, straightforward account of it; instead, there are myriad beliefs, ideas and attitudes about menstruation within the sanātana fold.

The section opens with the mythical-origins of menstruation — the account of Indra killing Viśvarūpa:

“When Indra had slain Viśvarūpa, the three-headed son of Tvaṣṭṛ, he considered himself to be tainted with exceedingly great guilt. He ran to the women for protection and said to them, “Take upon yourself the third part of this my guilt caused by the slaying of a learned brāhmin.” They said, “Let us obtain offspring if our husbands approach us during the proper season, at pleasure let us dwell with our husbands until our children are born.” He answered, “So be it”. Then they took upon themselves the third part of his guilt. That guilt of brāhmin-slaying appears every month as the menstrual flow.”

While the story primarily functions as Eliade’s ‘celestial archetype’[1], Nithin gathers from it the fact that the term ‘taboo’ contains a kind of dualism — two seemingly quite different, even radically opposite, forms of sentiment. A thing may be taboo because it is too sacred/pure to be touched; or, on the other hand, it may be taboo because it is unclean/impure. From one aspect, then, the woman who may not be approached is polluted, unclean, ‘aśauca’; from another aspect, she is inviolable, holy: she is sacred and accursed at once.

Nithin analyses this story, analyses the term ‘aśauca’ with reference to the myriad rules of menstruation prescribed in the Dharmaśāstra-s, and from the perspective of Āyurveda, Yoga and science to show that the period of menstruation functions as a period of rest, austerity, aśauca, a means of maintenance of health and as a period of celebration in traditional societies (the last fact demonstrated by the different menarche festivals celebrated across the country: Ambubācī festival in Kolkata, Keddasa in Karnataka, Rajaparva in Odisha, etc). Interestingly, Nithin also shows that the period of menstruation functions as a purifying-process. Quoting from smṛti-texts like Smṛticandrikā, Śuddhikaumudī, Śuddhiviveka, Baudhāyana Dharmasūtra, etc, he shows that through a temporary period of ‘aśauca’, a woman is rendered ‘pure’ throughout the other days — “women (possess) an unrivalled means of purification; they never become (entirely) impure. For month by month, their temporary uncleanness removes their sins”. Nithin also draws attention to case-studies in which women who suffered from heavy menstrual bleeding (lasting for 5-6 days) were treated with a regimen of rajasvala-paricarya as prescribed in the textbooks of Āyurveda for 4 consecutive cycles at the end of which their bleeding returned to normalcy — this demonstrates, in his words, “the efficacy and utility of rasavala-paricarya and the soundness of the āyurvedic principles on which the paricarya is based on…”. Thus, he demonstrates how traditional cultural constructions of menstruation differ from modern ‘bio-medical models’, and yet are just as valid.

In the next section, Nithin discusses menstrual notions in Buddhism, Jainism, Sikhism and tantric traditions — the traditions that originated and formed an integral part of the fabric of ancient India. It is an exhaustive treatment that includes ideas of menstruation among Buddhists in India, China, Tibet, Japan, Sri Lanka, Taiwan and other South East Asian countries, and among svetambara and digambara Jain monks and householders. Drawing from a wide variety of sources — Amitābhasūtra, Abhidarmakośa, Blood Bowl Sūtra, The Entering the Womb, Chedasūtra, Kalpasūtra, Ācaraṅgasūtra, Sūtraprabharta, Tātparyavṛtti, etc — the author offers parallels between different ideas in different traditions — for example, the Chinese notion of qi, Hindu notion of prāṇa-śakti and Yogic conception of ojas; and this makes for an extraordinarily meticulous work.

It is interesting to note that excepting Sikhism and tantric traditions, the other religions regard menstrual blood as unclean/impure on the one hand, and on the other, “vitally important for procreation”. Indeed, it is remarkable to note that the notions, restrictions, and mythology of the different traditions are eerily similar to each other: that such patterns with similar meanings should recur across different cultures points to the fact that “symbols and myths come from such depths: they are part and parcel of the human being and it is impossible that they should not be found again in any and every existential situation of man in the cosmos.” Unfortunately, in the modern world that is bereft of the sacred, taboos are seen as tools to “suppress women”— this is reiterated so often that it is established as a “fact”, instead of merely a theory. Nithin Sridhar’s work, then, offers an alternative — a deeper, more profound — way of understanding the traditional conception of menstruation.

A large section of this exhaustive work deals with ideas of menstruation in Abrahamic religions — in Judaism, Christianity (ancient and medieval), and Islam. In this section, Nithin draws parallels between Jewish and Hindu constructions of menstruation, and also shows that in Christianity and Islam, the notion of ‘impurity’ (associated with menstruation) transformed into a radically different category — that of ‘sin’. The author writes that such a reformulation of category led to the “othering” of Jews[2], and also led to the idea that menstruation was associated with witchcraft; this in turn led to great persecution of women: “(menstrual blood was viewed) as a means of exchange between a supernatural force and the physical world… the image of the witch is an image of the transforming and changing menstrual cycle”.

It is easy, then, to see how words such as ‘pollution’ and ‘taboo’— associated with sin — carry an ethnocentric baggage, and to use these terms — instead of words like ‘aśauca’ — affects the traditional/culturally-different understanding of menstruation. Nithin points to the fact that “othering” of women (on account of menstruation) is completely absent in non-Abrahamic religions, and the conscious/unconscious pejoratives attached to the notion of ‘pollution’ obscures other understandings of menstruation — to club them together and demonize them is unjust.

The author also dedicates a great section of the work to menstrual notions in ancient Western civilizations — Greek, Roman, Mesopotamia, and Egypt. It is interesting to note how the notion of ‘śauca–aśauca’ manifests as ‘miasma-katharsis’ in Greco-Roman civilization, as ‘maat–bwt’ in Egypt, and ‘urruśtu’ or ‘(m)usukkatu’ in Mesopotamia. Another point of great significance is the one irreducible element in it: the element of the sacred. Nithin shows that a simultaneously cosmic and sacred dimension of menstruation manifests itself in the menarche festivals of these ancient cultures and also in their deities of menstruation: Artemis, Diana, Iśṭar-Innāna, Isis, Hathor, Sakhmet, etc (who may be considered as the counterparts of the Hindu goddesses, Pārvatī, Kāmākhyā, Bhagavatī, etc). And it is this experience of the sacred that differentiates the ancient world from the modern, and Nithin uses examples from numerous indigenous communities to further illustrate this fact: examples from Central and South America, Australia and Africa, Europe, and Native America, etc.

Unfortunately, these ancient cultures are today categorized as “primitive”, “benighted”, “superstitious”, “ignorant”, etc. The criticism is relentless. Because according to modern notions, there is no truth except the scientific one.

Nithin Sridhar’s exhaustive work[3], then, puts a moot point on the table: is there only a “purely scientific”/social/patriarchal framework to understand traditional menstrual notions or can we make an effort to recognize the metaphysical notions that underlie these cultural ideas. Can we become truly liberal?

[1] Mircea Eliade wrote, “(for the archaic man) objects or acts acquire a value, and in so doing become real, because they participate, after one fashion or another, in a reality that transcends them; human acts… their meaning, their value, are not connected with their crude physical datum but with their property of reproducing a primordial act, of repeating a mythical example…”

[2] Nithin points to the absurd notion of the “Jewish male flux” or “male menstruation” that had the powerful repercussion of their expulsion from society.

[3] Complete with 60 pages of notes and references!