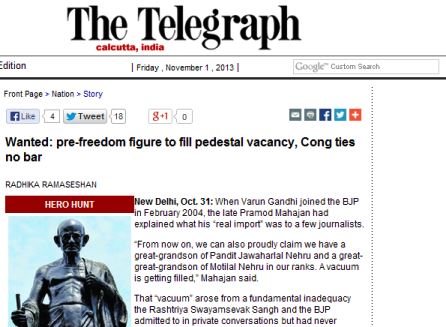 Note: As part of IndiaFacts’ call to the public to send us instances of distortions about facts relating to Hinduism and India, we are delighted to inform that Mr. Seshadri from Chennai has sent us the following Fact Check piece.

Assertion: A 31 October 2013 article authored by Radhika Ramaseshan in the Telegraph makes the following assertions:

1. The Hindu Mahasabha and the RSS, were never associated with the freedom movement.

2. The shadow of Nathuram Godse looms large over the “parivar’s” Gandhi outreaches.

3. The RSS-BJP’s pro-Ambedkar overtures were predicated on what Dalit writers claimed was a “misinterpretation” of his views on Islam.

When we examine the first assertion that the RSS was not associated with the Indian freedom struggle, we discover the following facts:

With the intention of uniting Hindus and to awaken the spirit of patriotism, discipline and bravery in them, Dr. Hedgewar founded the Hindu Yuva Club, which was later named the Rashtriya Swayamsevak Sangh (or RSS) in 1925.

In April 1930, Mahatma Gandhi gave a call for Satyagraha (Non-violent struggle) against the British Government. Dr. Hedgewar participated in the famous Jungle Satyagraha along with several patriots and freedom struggle activists. The British promptly arrested and sentenced them all to nine months’ imprisonment in Akola jail.

When we examine the second assertion of the Telegraph that Nathuram Godse’s “shadow looms large over the “parivar’s” Gandhi outreaches,” we discover the following facts:

A Commission of Inquiry into the “Conspiracy to murder of Mahatma Gandhi” was appointed and its report was published by India’s Ministry of Home Affairs in the year 1970. Accordingly, Justice Kapur who headed the Commission noted the following:

Besides, Nathuram Godse had parted ways with the RSS as early as 1934, more than a decade before he murdered Gandhi in 1948. It is therefore far from the truth when the Telegraph claims that Godse’s shadow looms large over the RSS when the facts reveal exactly the opposite.

When we subject the third claim that the “RSS-BJP’s pro-Ambedkar overtures were predicated on what Dalit writers claimed was a “misinterpretation” of his views on Islam” to factual scrutiny, we discover the following facts. Indeed, these facts are firsthand, that is, they are written by Dr. B.R. Ambedkar himself.

In his book, Pakistan or the Partition of India, towards the end of Chapter 4, Dr. Ambedkar writes:

The Muslim invaders, no doubt, came to India singing a hymn of hate against the Hindus. … Its (Islam’s) growth is so thick in Northern India that the remnants of Hindu and Buddhist culture are just shrubs. Even the Sikh axe could not fell this oak. Sikhs, no doubt , became the political masters of Northern India, but they did not gain back Northern India to that spiritual and cultural unity by which it was bound to the rest of India before Hsuan Tsang.

Islam speaks of brotherhood. Everybody infers that Islam must be free from slavery and caste. Regarding slavery nothing needs to be said. It stands abolished now by law. But while it existed much of its support was derived from Islam and Islamic countries… The existence of these evils among the Muslims is distressing enough. But far more distressing is the fact that there is no organized movement of social reform among the Musalmans of India on a scale sufficient to bring about their eradication. The Hindus have their social evils. But there is this relieving feature about them—namely, that some of them are conscious of their existence and a few of them are actively agitating for their removal. The Muslims, on the other hand, do not realize that they are evils and consequently do not agitate for their removal. Indeed, they oppose any change in their existing practices. It is noteworthy that the “Muslims opposed the Child-Marriage Bill brought in the Central Assembly in 1930, whereby the age for marriage of a girl was raised to 14 and of a boy to 18 on the ground that it was opposed to the Muslim canon law. Not only did they oppose the bill at every stage but that when it became law they started a campaign of Civil Disobedience against that Act. Fortunately the Civil Disobedience campaign of the Muslims against the Act did not swell and was submerged in the Congress Civil Disobedience campaign which synchronized with it. But the campaign only proves how strongly the Muslims are opposed to social reform.

It is clear that the aforementioned extract leaves no room for doubt or misinterpretation as to Dr. Ambedkar’s views on Islam.

There is absolutely no question that the Telegraph has made serious factual errors as regards the history of the Indian freedom struggle and about several important historical persons and organizations. Equally, it’s pretty clear that the piece is highly biased against the RSS and/or the BJP in order to pass off misleading and false claims as truths.

IndiaFacts verdict: the claims in the Telegraph article are completely False.