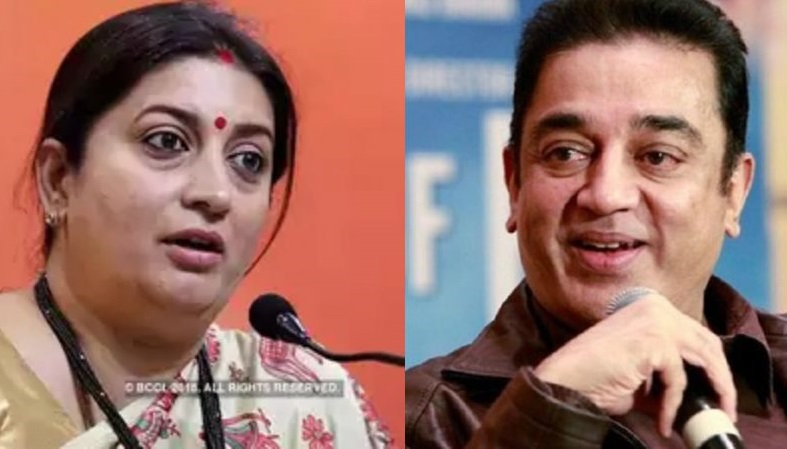 Smriti Irani and Kamal Haasan faced off in a recent debate moderated by Arnab Goswami. The Hindu-baiting Kamal Haasan was, not surprisingly, easily decimated. Irani argued effectively on fighting terrorism and respecting the national anthem. However, on two key issues, she failed to articulate the Hindu point of view – or to even argue forcefully.

Women of menstruating age are not allowed inside Sabarimala. The reason is the traditional belief that the deity of Ayyappa, who is enshrined in Sabarimala, has taken to a vow of celibacy. So, women of menstruating age do not visit this abode. This restriction doesn’t apply to the numerous other Ayyappa temples across India which women visit. Hindu women have no problem with observing this practice. However, the Supreme Court of India recently adjudicated that women of menstruating age can visit Sabarimala. Millions of Hindu women, correctly perceiving this as an infringement on Hindu beliefs, protested on the streets. Only a small group of feminists, who were shown to be Christians, Muslims, and Communists, attempted to breach the tradition and enter Sabarimala because of the court ruling. Some of those feminist women had elsewhere posted pictures posing with a beer bottle and appearing topless – evidence that they led lifestyles quite at odds with that of a Sabarimala devotee.

Goswami framed the issue as positive change on behalf of women. Kamal Haasan concurred. Irani, in her response, only argued that traditions cannot be violated. She pointed out that she, as a Hindu married to a Zoroastrian, doesn’t attempt to enter the Parsi fire temple because Zoroastrian traditions forbid women from entering it.

Although reasonable, this is not a winning argument. It is a plea bargain. It only reinforces the incorrect perception, especially in the minds of the westernized section of youth, that both Hinduism and Zoroastrianism are misogynistic and regressive. Irani’s response fails to highlight that Sabarimala judgment is a selective attack on sacred Hindu traditions and that it was the outcome the enemies of Hinduism had sought.

“Arnab and Kamal Haasan, both of you want to violate an age-old tradition to pander to feminists and anti-Hindus even though virtually all observant Hindu women want to uphold the Sabarimala tradition. Now, let us apply the same yardstick to Islam and Christianity.

Let us say a small group of feminists insist that women clad in short skirts have the right to enter and pray in the mosque. They also want to worship the three goddesses Allāt, al-‘Uzzā and Manāt in the mosque. In a qur’anic verse (53:19-20), the Prophet Muhammad admitted that these three goddesses had intercessory powers. Later, those verses were abrogated as satanic in origin (22:52). A feminist may allege this to be a patriarchal narrative and see the entire episode as the suppression of the divine feminine in Islam. A small group of beer-chugging, mini skirt-clad feminist women, including non-Muslim women, may insist on worshiping the image of the three goddesses in the mosque although mainstream Islam is monotheistic and iconoclastic.

Would either of you or the Supreme Court support the demand of this group of feminist women?

Let us now go beyond feminism. Let us also articulate on behalf of homosexuals.

Early Christianity portrayed Jesus as homosexual. The Columbia University professor and scholar Morton Smith uncovered a Secret Gospel of Mark, which implicitly portrayed Jesus as homosexual (see Clement of Alexandria and a Secret Gospel of Mark). Early church fathers such as Clement of Alexandria admitted to the existence of such a gospel. What if a group of homosexual men and women want to worship Jesus in all his homosexual glory in the church?

Would either of you or the Supreme Court support such a lesbian and homosexual demand?

Christianity portrays the Virgin Mary as a perpetual virgin which many feminists consider offensive as it suppresses healthy expressions of female sexuality. This unnatural and misogynistic portrayal has resulted in the denial of sexual pleasures to Christian women until 1952 (see Maines, Rachel P.: The Technology of Orgasm – “Hysteria,” the Vibrator, and Women’s Sexual Satisfaction). However, alternative traditions from the earliest period of Christianity portray Mary as a rebelliously promiscuous woman who was unafraid of exploring sexual pleasures with multiple paramours by transgressing marital boundaries. According to one such account written down in the Toledot Yeshu, the Virgin Mary conceived Jesus through seduction by a Roman legionnaire named Panthera even though she had been betrothed to another man. She would go on to have sexual flings with a few other men in Egypt. Some feminists may perceive these as expressions of sexual independence and assertion against patriarchy. What if a group of feminist women want to worship the Virgin Mary and her many paramours in the church?

The attack on Sabarimala must not be viewed in isolation. It is one instance of a well-coordinated and well-funded attack on Hinduism to facilitate Christian proselytism. These attacks are massively funded by western nations and systematically carried out by a network of leftist NGOs. The idea is to attack every sacred Hindu festival and temple tradition to sow discontent in society. The media, academics, politicians, and judiciary are coopted into this well-orchestrated attack. Hindus are often defenseless against such attacks. It may sound counter-intuitive but it is the minority Christians and Muslims (the leftists constitute their vanguard) who are the aggressors here and the majority Hindus are the victims. Often, a minority which is organized around congregations and controls institutions of power can turn the tables against the majority. India’s Muslim and Christian colonial rulers, although a minority, subjugated the majority Hindus because of this reason.

Unfortunately, most Hindus are unaware of this reality. This is exactly why it is important to invoke the examples I presented earlier because that is the only way the Hindus would begin to see the asymmetry of power. It is only then they would begin to see the brazenness and unfairness of the attack on Sabarimala. It would possibly bring about Hindu cohesiveness. More importantly, reasonable Christians and Muslims may also realize that the attack on Sabarimala is not only unfair but that such attacks would elicit a counter-narrative from Hindus using the examples I presented. They would begin to realize that they should desist from attacking Hinduism under any pretext – or unleashing the leftists to do their dirty job, if they want the Hindus to desist from attacking Christianity or Islam. Reciprocity is a two-way traffic.

Goswami invoked a recent incident in Uttar Pradesh where a person was allegedly killed by gau rakshaks for smuggling cows for slaughter. He characterized gau rakshaks as cow vigilantes and took exception to a couple of BJP legislators felicitating the gau rakshaks under trial. Kamal Haasan portrayed this as an example of Hindu extremism aimed at frightening the religious minorities.

Irani pointed out that PM Modi unequivocally condemned ‘cow vigilantism’ and that CM Yogi ordered a police crackdown. She hastily dismissed the act of the two BJP legislators felicitating the gau rakshaks as personal and not endorsed by the party. She invoked the example of Congress designating Kamal Nath, who is an accused in the 1984 pogrom directed against the Sikhs, as Madhya Pradesh CM. Her point was that those who have felicitated 1984 riot accused as CM have no moral right to point fingers at a couple of BJP legislators for felicitating gau rakshaks.

This may have worked as a debate rhetoric but Irani was effectively disowning the gau rakshaks. The cow is sacred in Hinduism and Hindus worship the cow. Traditional literature written in languages so diverse as Sanskrit and Tamil consider the killing of a cow a grave sin. Many Indian states have legislated against cow-killing because of this. Christian and Muslim conquerors often desecrated Hindu temples by hurling beef into their sancta sanctorum only because of the sanctity of the cow to the Hindus. So, anyone who kills the cow or consumes beef is desecrating what Hindus worship as sacred.

Look at Europe or America. All religions but Christianity were systematically eradicated. Look at the Middle East. All religions but Islam have been suppressed. Hindus have been the most tolerant people on earth. Christianity, Zoroastrianism, and Islam have thrived in this country for many centuries only because of Hindu tolerance. Is it too much to ask that the Christians and Muslims reciprocate our generosity?

It may be too tempting to look at the actions of the gau rakshaks in isolation and call it vigilantism. However, that would be unfair. The law, police, and judiciary should’ve prevented every single act of cow-killing simply because the cow is sacred to the Hindus. Gau rakshaks had to step in only because the cow was slaughtered everywhere while the establishment turned a blind eye.

India exports 20% of the beef consumed worldwide. It is a mafia. A few Indian states like Kerala or West Bengal conveniently allow cow slaughter. So, cows from other states are illegally transported to these states under the most tortuous conditions, slaughtered, and illegally exported. One needn’t be a gau rakshak to find this abhorrent. Any right thinking and compassionate person should be alarmed that Indian laws are openly flouted, and the cow abused to no end to satiate the greed of the abattoir industry and the craving for beef in the Middle East and the West. India raises orders of magnitude more cows than it needs just to meet the demand for beef in foreign countries. This results in serious environmental degradation because scarce water, agricultural, and natural resources are diverted to raising cows in industrial farms. Cows are among the leading producers of greenhouse gases which aggravates global warming.

So, blame the establishment of the last seven decades. Blame those who eat beef. Blame those who illegally transport the cow under the most tortuous conditions to abattoirs. Do not blame the gau rakshaks. Any attempt to blame the gau rakshaks is only a diversionary tactic deployed by the abattoir industry to deflect attention away from their illegal activities. Given the environmental degradation beef consumption causes, one must rather focus on the real problem, i.e., beef-eating. The gau rakshak is not part of the problem. Objectively speaking, he is part of the solution because he is the only wrench thrown in the works of the illegal, cruel, and exploitative beef industry.”

Simply put, Hindus find cow-killing and beef-eating abhorrent – and justifiably so. India has traditionally denounced these practices. India should comprehensively ban these practices and severely punish those who violate the law. Irani wouldn’t win a single heart by appeasing the beef-eaters and by denouncing the gau rakshaks. Defending the gau rakshaks may not make her Ms. Congeniality in the eyes of westernized Hindus, westerners, Christians, Muslims, and leftists. However, it would’ve certainly resonated with an overwhelming majority of Hindus.

We needn’t calibrate our debate responses with the intent to appeal to western sensibilities. We can offer our own narrative based on a dharmic worldview.