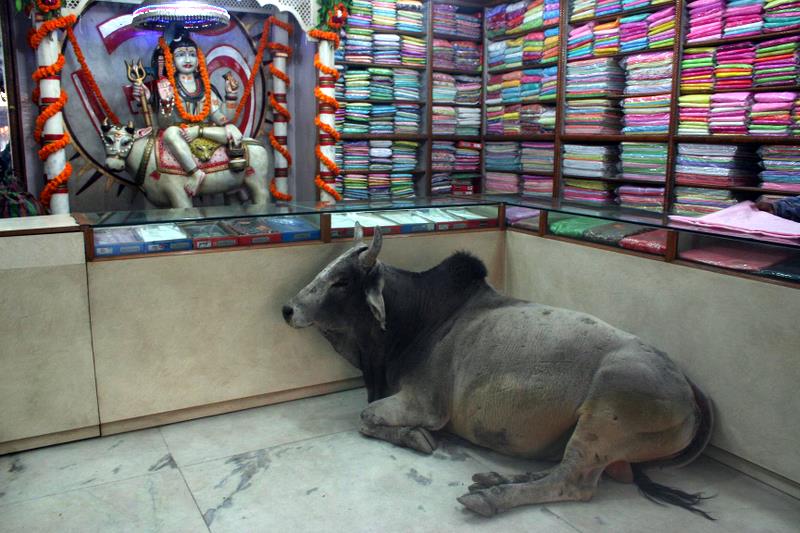 (Some events within this piece are a flashback – they occurred in July 2007.  They are a TRUE dialogue based exclusively on an e-mail conversation between two friends, VC = a dear friend, Vijay a lifelong Vegetarian and JJ= me, a non Veggie)

But, first, a sense of the present: A lot of hot air is being expelled in the aftermath of the Dadri incident in UP. A local fracas which led to the tragic death of one man, and which would not make news if the man were a Hindu has been globalized to epic proportions.

As usual, the self declared defenders of the freedom to propagate anti-Hindu, anti-India invective, and to continue a vitriolic assault on Narendra Modi as the personification of the devil incarnate are busy at work. Saturday’s BBC Radio 4 programme was no exception – Sanjoy Majumder, like an ideological descendent of Macaulay, displaying his acquiescence in all its glory, parroted the usual BBC tripe. Isn’t is funny how low  some folk will sink to keep themselves in their pathetic servile jobs in a putrid, ossified, so called News organisation rotten from the core?

Totally in keeping with the standard template, the unwashed, unreconstructed, uncouth chatterati  that make up the bulk of western arbiters of other cultures  employs the usual tactics. The Beeb hammers the “fundamentalist” Hindu Nationalist agenda, which might suggest that many Hindus and also other non-Hindu Indians are not nationalist, or possibly that these non-nationalist Indians of the Beeb’s imagination pine for the return of the munificent British Empire, or maybe, even a not so benevolent Ghaznavi or a composit-multi-culti Mughal? They make out that this “nouveau Hinduism” is a radical, terroristic front against “minorities” and goes counter to the alleged age old Hindu traditions of polytheistic beef eating? Shambo, the bull at Skanda Vale Temple in Wales

Shambo, the bull at Skanda Vale Temple in Wales grabbed the headlines in the UK media for several weeks in the summer of 2007. His plight raised some key questions about ethical values and humanity and how diversely people perceive them as well as the reactions these compass points elicit. Here’s the email conversation between friends.

VR: What the bull***t is all this about? Why have Hindus in general and the Hindu Forum got involved in this? Surely, this is a diseased animal and needs to be despatched to meet its maker?

JJ: I think you are missing several points.

We need more people who care about a tree, a bull, a child, and not merely look at their economic value. Surely, by their calm, assured, and non violent, philosophic approach, the campaigners for Shambu have shown that there is indeed a different way than brandishing threatening banners and flags, masking faces and shouting “death” to anyone who insults this or that?

VR: We are just proving that we are just a bunch of ignorant and superstitious animists. Would the same hue and cry been raised about a goat? I think not. We are just leaving ourselves open to being classified as cow worshippers.

There are more important things in life than preservation of a single cow. If Hindus or Hindu Forum of Britain (HFB) feel so deeply about this issue then how about trying to save all cows in the UK? We are happy to live amongst a community of cow eaters and suddenly we get an attack of religious sentimentality about one bull being slaughtered? Are these the sentiments of a “religious minority”? Hmmm, where have I heard this before? Let’s take a leaf out of others book, we have now also become the victims, eh?

Are you going to form this ring of chain round this cow to save it from being slaughtered? Oh yeah, Gandhi must be kicking his heels in the proverbial grave.  The world has gone mad. Stop the world, let me get outta here!

JJ: Animist?? I’d rather be an animist than a sanctimonious believer in an exclusivist “true” god, whatever that is.  It seems that such labels as “cow worshipper” and “animist” affect you and get under your skin. By the way, when are you planning to eat meat or have you now started?

As to animal slaughter in general, this is not the issue at stake here. This is about one animal in one place which by circumstance happens to be a temple that eschews violence of all forms.

I commend to you a 2 hour documentary called “Holy Cow” – catch it on NG channel when it comes round again. You will be surprised and educated. The cow holds a special place across so many cultures. The Masai were so affected by the events of 9/11 that they gifted cows to New York as a solace and a mark of their way of saying “we are thinking of you”.

The relationship between humans and the cow is so ancient it goes back to before when man first settled down to an agrarian lifestyle. The ancients around all the river civilisations held cattle in high esteem not just economically but spiritually. Note the presence of the cow or the bull in the iconography of the Greeks, the Egyptians, the Sumerians, and the Indians and also of the rock paintings in Europe and Africa. Even today, the pastoralists generally do not kill their cows in the same way as the mass market for meat consumption.

VR: That’s a lame comeback!! I really do not know what significance me eating meat has to the story of a diseased bull? I could ask you the same question? Seeing you are so concerned about the welfare of animals, when are you going to stop turning your stomach into a graveyard of animals and stop eating meat?

I have a great regard for all living species not just cows. And yes, I am aware that cows are and have always had a special place in Hinduism but that’s not to say we have to worship the animals. By all means, let’s make a concerted attempt at reducing the pain suffered by the animals and HFB would be making a worthwhile contribution if it added its voice to various other animal rights organisations.

JJ: No, you are totally mistaken – this is NOT a case of Hindus worshiping cows! Just because some ignorant sorts seem to think so does not make it true.

Yes, the Hindu Forum and others in the community do need to take up causes against animal cruelty much more than they do at the moment. However the kind of mindless campaigning that some of these organisations conduct is itself dangerous and destructive – you know of incidents of such people terrorising Oxford scientists who use around 100 primates every year in their groundbreaking medical research all for the good of humanity yet, these animal lovers will but do nothing about the inhumane conditions of millions of cattle, sheep, pigs and poultry. The same was the case with the politicised move to ban fox hunting.

Yes, eating meat has little relevance to the plight of this bull. And yes, abstaining from meat is something that I do aspire to. For this, I applaud your retort to what you refer to as my lame comeback.

No, this bull is not confirmed as diseased, it is only suspected of being diseased. Also, take a note of the report today, Monday 14 May. It is evident that culling animals does not stop bovine TB. In their quest to control the disease, Ireland has virtually eliminated their badger population but yet the incidence of bovine TB is unabated. When are scientists going to be listened to? How will killing this bull, which is isolated, save other cattle from the disease?

We ought to step away from the narrow definition of “I am a Hindu and that person over there is not a Hindu”. Instead we should see this bull as a metaphor for the ethics of life in general and not something that is specific to the “sentiments” of Hindus or whoever. In this regard, the Skanda Vale temple seems to fit the bill perfectly – it is called the “Many names of God” and you will see that it has the insignia of all the major faiths.  Looking at it this way, we can overcome prejudices, some foisted on us and many self inflicted, and focus on mutual education and not get too worried about ignorant comments about animism and cow worship.

I am appalled that unproductive cattle are so badly treated in India. It seems that Hindu society cannot reconcile as to what is worse, killing them or letting them go hungry and scavenging? That has to change. But before that can happen, Indians have to free themselves from the shackles of slavery that has held them back for a millennia.

As it turned out, Shambo was put to sleep without a murmur from the Hindu community. No burnt effigies, no threats, no damage to property or to life or limb. Life carried on….

The metaphor of Shambo still persists; Hindus continue to advance in presenting an alternative world view , but the global calumny against Hindu Dharma continues unabated. Even Animal Lovers and Animal Rights activists have shied away or remain ignorant of the debate. But for a few honourable exceptions from the West like Francois Gautier and an increasing array of indigenous Indic commentators, (see for example the wonderful item in this electronic journal http://indiafacts.co.in/beef-against-beef/ by the erudite Ashish Dhar), there is still much inhumane, unadulterated racist anti-India filth being passed off as reportage. Equally, there are has-hardly-beens like Nayantara Sehgal who make flatulent gestures whilst either remaining spineless in the face of, or worse, actually siding with the real rabid fascist ideologues of exclusivist but conflict riddled politics and monotheisms.

People power is increasingly showing itself on social media, Dharmic awareness rises by the day and that the presstitutes are not easily allowed to pass of their lies as gospel. It is right that despite a centuries long slumber, Hindus still hold their Dharmic values dear within their DNA and are not adopting the tactics honed by others in socially disruptive or even violent protests against gun control, police brutality, cartoons or  an assortment of other  grievances.

The Hindu is not some dirty creature to be shunned; he/she is just like the millions in the west, east, north and south, be they members of vegetarian societies, peaceful activists for the environment and for animals, Yoga practitioners or just conscientious humane individuals, who are fed up with the polarisation of right-left divisions and the my-god-is-right rivalries and are seeking alternative solutions to global problems.

More active engagement, mutually educating and making common cause with the silent millions around the world who do not profess to be Hindu, but who are a massive yet hitherto a dormant force and potential alliance base, and using this to crystallise, promote and share the universal applicability of Dharma in preserving of our little planet’s diversity has to be the vision for the Hindu. Now that would be proper Dharma-Raksha in practice!

Shambo’s Atman would find Shanti in that.