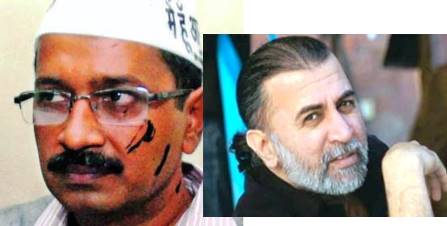 Tehelka magazine editor-in-chief Tarun Tejpal and Aam Aadmi Party (AAP) boss Arvind Kejriwal were the self-appointed guardians of morality. In the reckoning of their supporters, they were the conscience of the nation, knights in shining armor who were zealously striving to rescue many a damsel in distress—democracy, secularism, truth, socialism, fairness, to name just a few. Men like Tejpal and Kejriwal—the Left-leaning, politically correct public figures—are the messiahs of our age. Or so we were told.

Comeuppance was a bit late but it did arrive—with a bang, at least for Tejpal. The impressive edifice that Tejpal had built around his persona came crashing down. And when Tejpal found himself in a fix as his victim showed courage and exposed him, he tried to don the mantle of a fallen hero over, what he tenderly called, “misconduct.” It was, however, from the girl’s letter that we came to know that the so-called misconduct included lifting up her dress, pulling down her underwear, attempting “to perform oral sex,” and penetrating her with his fingers.

Sophistry and subterfuge remained the defining features of the utterances that appeared first in the media. Savor a few delicacies. In a letter to Tehelka managing editor Shoma Chaudhary, Tejpal said,

A senior journalist who long ago was Tejpal’s colleague in another publication told me that the great editor still believes that there would have been nothing wrong if the young employee had accepted his advances. Even if to survive in the ‘free, fair, fearless’ magazine, for he told her in no uncertain terms, “Well, this is the easiest way for you to keep your job.”

Is this any different from the attitude of the lecherous moneylender of Mother India who made a similar offer to the protagonist of the movie? Of course, Tejpal is infinitely more polished; he is well-versed with the latest fads of intellectualism; he can regale the literati and glitterati with his honeyed cadences; but beneath the varnish lurks the same beast—perpetually on the lookout for his prey.

The beast had violated a girl the night before Shoma Chaudhury moderated a panel discussion on ‘The Beast In Our Midst: Rape Survivors Speak Their Stories.’ Apparently, Chaudhury did not know about her boss’ nocturnal exploits, though it is doubtful if she would have included Tejpal’s victim among the “extraordinarily brave people who have agreed to share their stories of deep pain, fear, protracted humiliation and the slow, determined fight back” had she known about it.

Chaudhury, as moderator, was aghast at the state of our society: “We never look at how deeply misogynistic and prejudiced our own society is.” She wanted to highlight “our own silences and to deepen our understanding of how complicit we are about the beast in our midst.”

How complicit you are, ma’am? You inveigh against misogyny and prejudice all around, but feign ignorance at the same in your immediate vicinity. And then you tend to brush your superior’s felony under the carpet, calling it an internal matter! Would you have reacted similarly had the accused been a business tycoon or a leader of the Bharatiya Janata Party? When the CBI director made a loose remark about women a week ago, you wanted his removal, but when your boss behaves egregiously, you feel apology and recusal would suffice! Could hypocrisy be more transparent or brazen?

The only thing that can be said in Tejpal’s favor is that he did confess to wrongdoing. In a day and age when incumbent ministers term multi-billion dollar scams as ‘zero-loss’ transactions, he certainly could have denied the entire episode or, given his gift of the gab, could have presented the incident as consensual liaison gone sour. In his case, self-righteousness has not completely eclipsed reason.

The same cannot be said about Kejriwal; self-righteousness seems to be his hallmark. In March this year, social activist Swami Agnivesh claimed that Kejriwal and Manish Sisodia, another AAP leader, had siphoned off Rs 5 crore from the fund the common people had given during the anti-corruption movement launched by Anna Hazare. Agnivesh, who was earlier associated with Hazare, accused the Kejriwal-Sisodia duo of “greed and political ambition.” Neither the media nor the man on the street took these charges seriously.

But many eyebrows were raised when Hazare himself questioned the financial impropriety by the AAP. In a letter to Kejriwal recently, he wrote: “I believe money which is being collected in the name of agitation should be used for an agitation only.” And now there is a sting against his party.

Kejriwal and his buddies have denied all these allegations, using typical arguments like ‘why now,’ ‘who has done it,’ and ‘why are we being targeted.’ They are trying to peddle conspiracy theories in the same fashion as the Congress leaders do, but there is a difference: while people are likely to tolerate some corruption from conventional parties, they are unlikely to forgive an outfit who only capital, according to its own admission, is honesty. A householder found in the arms of a prostitute may be forgiven, but a preacher caught in a brothel is not.

There is another aspect to the allegations against Kejriwal that even the Congress and the BJP have not commented upon. The grand old party has been in power for most of the time after Independence. The BJP was also in office for six years; it rules in big states and may be on a comeback trail. The leaders of these parties have had big opportunities to become corrupt, and some of them did become so. The AAP, born yesterday, has had very few—and it seems to have grabbed all of them! So much for honesty.

People like Tejpal and Kejriwal thrive when the climate of opinion is polluted with socialist shibboleths, political correctness, and, above all, sanctimony. Discredited theories resurrect as new mantras for politics and economy (‘inclusive growth,’ empowerment); fancy ideas like entitlements and ‘two Indias’ gain currency; fiscal prudence is viewed with disdain; empirical evidence is frowned upon; and the intellectual class discards reason and embraces dangerous doctrines. The result is the strengthening of what I call the politician-intellectual complex.

It is an alliance of the idealist and the practitioner of realpolitik. The idealist keeps crying for expanding the role of the state—of course, for the sake of the poor—while the politician keeps reaping the benefits that accrue as government expands in size and scope. Hence the relevance of the National Advisory Council (NAC). It is not surprising that both Tejpal and Kejriwal are ideologically close to the NAC.

NAC fanatics and their lackeys keep nagging businessmen on one pretext or the other; they are forced to seek remedy; politicians offer the remedy—of course, at a price. It is a win-win situation for the intellectual-activist and the politician: the former derives the sadistic pleasure of teaching the capitalist a lesson for whom his hatred is pathological; the politician mints money. Tejpal and Kejriwal, the intellectual-activists, wanted to give a concrete shape to their preposterous ideas—and fell flat because of hubris. Normally, hubris is the consequence of great power and influence; but Tejpal is no Aroon Purie and Kejriwal is yet to taste power; in their case, hubris came prematurely. As Jagjit Singh sang, “…haya yak-b-yak aayi aur shabab aahista aahista.”

Twilight of the gods?

Shouldn’t the recent revelations lead to the rethinking of the postulates and principles of our public discourse? Will we, the people of India, draw any lessons from the fall of one god and tainting of another?

According to a Norse myth, Ragnarök or twilight of the gods, is a series of future events, including a great battle foretold to ultimately result in the death of a number of major figures (www.wikipedia.org).

Afterward, the world will resurface anew and fertile, the surviving and returning gods will meet, and the world will be repopulated by two human survivors. Ragnarök is an important event in the Norse canon, and has been the subject of scholarly discourse and theory.

Would the recent events lead to the twilight of the gods and the decline of sanctimony? Against the backdrop of rampant philistinism and the Indian’s predilection to get carried by emotions, at least in the matters of public concern, I am not optimistic.