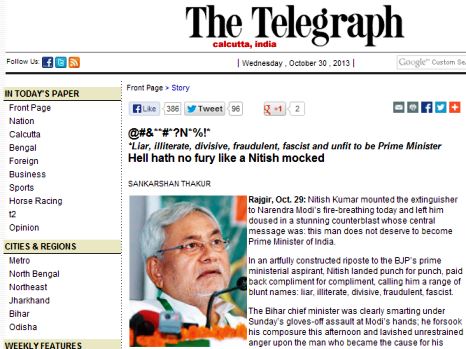 At the end of an oped in the Telegraph on 30 October 2013, the paper’s editor, Sankarshan Thakur provides history lessons to Narendra Modi and concludes that Modi’s sense of history is incorrect.

Sankarshan Thakur’s oped recounts Bihar Chief Minister Nitish Kumar’s riposte against Narendra Modi, which comes in the wake of Narendra Modi’s massive rally held in Patna on 27 October 2013. Among other things, Kumar’s retort includes taking potshots at Modi’s mentioning of various accounts of Bihar’s history. The following are the jibes taken by Nitish Kumar as reported in Sankarshan Thakur’s oped:

“Very educated man with a keen knowledge of history,” Nitish ventured, smacking his lips at what was to follow. “He thinks Alexander came to Bihar and was killed on the Ganges, he says Chandragupta Maurya was a Gupta dynasty king, he says Taxila is in Bihar, perhaps not knowing it is far away in the northwestern province of Pakistan. What is one to say of such a learned man?”

Based on this barb from Nitish Kumar, Sankarshan Thakur provides an infographic titled WHY MODI NEEDS A HISTORY GURU at the end of his oped. The infographic provides the correct facts of history as a counter to the errors that Modi had supposedly made in his speech about Bihar’s history.

First, Sankarshan Thakur has solely relied on Nitish Kumar’s words–that is, that Modi had gotten his Bihar history wrong–to write his oped and the accompanying infographic. However, when we listen to/read the exact words that Modi had uttered in his rally, here is what we get. The following then is the transcription (followed by an English translation) of the relevant parts of Modi’s speech:

These then are Modi’s words, verbatim. One wonders where Modi even mentioned the names of the persons who founded either the Maurya or the Gupta dynasty.

Next we can examine the second claim of Nitish Kumar–accepted as truth by Sankarshan Thakur–about Alexander’s (Sikandar) army being defeated on the banks of the Ganga in Bihar. Here is what Modi said:

Din-e-illahi ka bebak beda, naksha jiska aqsa-e-alam mei pahucha|
kiye paanch sau paar sato samandar, na aman mei thithka na gulzam mei jhijhka||
wo dooba dohab-e mei Ganga ke akar, wo dooba dohab-e mei Ganga ke akar||
The One who was (like) the unchecked ship of God, the One whose map stretched beyond this world|
The One who crossed the seven oceans with ease, the One who rested not in peace nor balked in adversity||
He drowned, when came to the Gangetic land||

The significant thing here is that these are not Narendra Modi’s words. He merely quoted a poem. Equally, there’s nothing in this poem that states that “Sikandar (Alexander) was defeated on the banks of the Ganga by Biharis” as claimed by Sankarshan Thakur’s infographic. Since unknown antiquity, India has been referred to by various appellations as “the land of the Indus,” “the land beyond the Himalayas,” “the land guarded by the Himalayas,” and “the land of the sacred Ganga.” This poem uses the same nomenclature while referring to India.

It is quite clear from the foregoing facts that Sankarshan Thakur has uncritically accepted as truth Nitish Kumar’s questioning of Narendra Modi’s sense of history. Further, Thakur has also attributed statements to Modi, which he never made. And Sankarshan Thakur has done this despite being aware of the fact that Modi’s actual speech is easily accessible for verification–either by himself or by the public.

This is a clear case of open distortion of facts and misleading journalism.

Postscript: IndiaFacts gratefully acknowledges the contributions of Arvind Dhar (Twitter: https://twitter.com/TheArvindDhar) and Samay (https://twitter.com/@right__click) for their translation of the verses quoted in this Fact Meter.