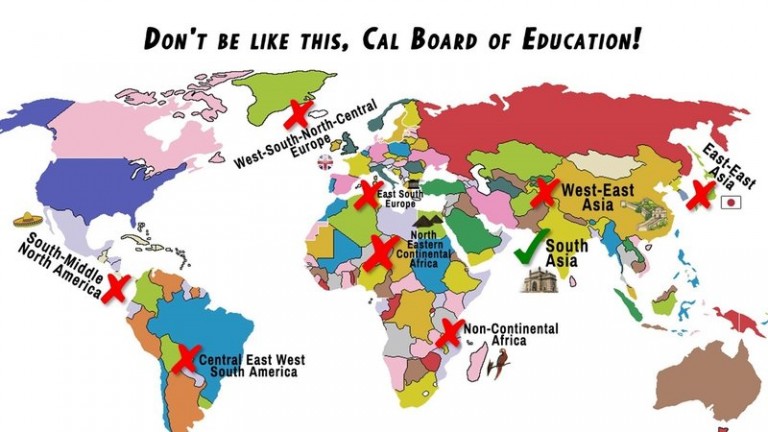 California is currently debating the portrayal of Indian history in their school textbooks.  A small group of South Asia studies faculty had asked the California Board of Education (CBE) to remove references to “India” and “Hinduism” and to replace them with the words “South Asia” and “Ancient Indian Religion.” Opposing these edits, a group of academics under “Scholars for People” had initiated a petition, which was signed by more than 25,000 people within a few days.

In the latest development, the “Scholars for People” have sent their “final letter” to CBE on May 10, urging the board to portray Hinduism in an unbiased manner and to not erase references to India.

Here is the copy of the final letter sent by the “Scholars for People.”

We are a group of scholars and faculty with interdisciplinary training and expertise in history, archaeology, religious studies, postcolonial studies, media and cultural studies and education (with specialist credentials in the teaching of K-12 history). We have, to our record, several publications on India and Hinduism in scholarly circles and in the full gaze of scrutiny of the public sphere. While we are well aware of current debates in the field of South Asia Studies and several of us teach and conduct research at the university level, some of us are also active public intellectuals and are conscious of the fact that translating academic debates for use in the context of the K-12 curriculum requires a different set of sensitivities and insights, which are sometimes lost when university professors enter such debates.

For one thing, it is unfortunate that some of your perceptions of this issue have tended, inaccurately, to believe that SAFG represents the full range of scholarly opinion on Indian history today. They do not, and in fact, several of their recommendations represent highly contested, contentious, and archaic positions in many cases. In the past, the IQC has received letters from several independent scholars, as well as the Uberoi Foundation, which is guided by renowned archaeologists and historians, and yet a misperception has persisted that this is a conflict between “scholarship” and “community” at best. We hope this letter will make the facts of who we are and what we stand for a little clearer. In addition to being a group of well-credentialed scholars, we also have widespread community support. This is evident from the 24,763 signatures of support received on our online petition on Change.org (https://www.change.org/p/academia-don-t-replace-india-with-south-asia-in-california-history-textbooks?)

We must therefore point out that some claims that might be presented by some university professors as “consensus” in their field, might well be only a form of dogma, and at the heart of several positions being fought for in the South Asia studies dogma today, is a reckless allegation about Hindus and Hinduism sharing common origins with Nazis and Nazism, and maybe even worse. Scholars like Wendy Doniger, for example, have written that the “Vedic drive toward wandering … had developed into what the Nazis called… Anschluss” [1]and have also made comparisons to the Native American genocide, and other scholars like Sheldon Pollock (credited as a consultant in the SAFG letters) have faced questions from over 150 traditional Indian scholars as well as thousands of readers for flaws in their scholarship as well as their attempts to somehow connect ancient Indian texts revered by millions of Hindus with the horrors of the Holocaust[2] (please see this report in Time magazine here and this opinion from Professor Makarand Paranjape here)

Even if these allegations have not explicitly entered the California textbooks debate, the fact remains that the persistent and systematic denial of India and Hinduism (and Indian and Hindu-American ways of knowing both) by the South Asia Studies paradigm is deeply entwined with this academic fantasy about Hindus somehow being fascist conquerors of their own land! This sort of thinking comes from the 19th century Aryan Invasion Theory mumbo-jumbo, and if our colleagues in South Asia Studies Faculty group really do reject the Aryan Invasion Theory as they profess to, they should be prepared to renounce it completely and help decolonize the curriculum, rather than merely prevaricate with excuses that we simply don’t know enough to reject the “migration” part. There are surely several creative ways in which the children of California can be taught that the origins of an ancient and diverse spiritual culture like Hinduism cannot be located in any simple fashion, while also steering us away from this lurking colonial-era “Hindus are Nazi” taint underlying the South Asia Studies dogma. What this dogma has done in higher education is problematic, and what it is poised to do in what ought to be the pristine and positive atmosphere of the K-12 classroom would be even worse. We are very disappointed that the SAFG suggestions in their present form amount to an erasure of the histories of not only Indians and Hindus, but also Hindu Dalits and Hindu Women, contrary to what they claim.

We recognize that deeply held beliefs in any institution are slow to change. Higher education can take its time as necessary before it comes around to revising its current positions. However, it is important that we should forge a way ahead at this time for California’s schoolchildren that transcends the currently polarized atmosphere. The entrenched resistance to honest debate and change among some of our South Asia studies colleagues should not be used to perpetuate ignorance any longer, and certainly not in the lives of 12 year old children who deserve better than an obscure, rusty, colonial-era racist paradigm that blames Hinduism for Hitler!

We therefore wish to place on record with you in the clearest possible terms our concerns about several errors, inconsistencies, self-contradictions and omissions evident in the three submissions made to you by the South Asia Studies Faculty (in November 2015, February 2016, and finally on March 23, 2016), and to urge you to reconsider some of your earlier decisions. While we appreciate the fact that the IQC in its March 24 meeting addressed a few of our concerns emanating from the CHSSP’s overwhelming last-minute acceptance of the South Asia Studies group edits related to its November 2015 recommendation that “most references to India before 1947 should be changed to South Asia” (p. 12), it is imperative for you to reconsider several of your apparent assumptions and prior positions in order to bring your hard work to fruition.

In our view, the IQC’s review on March 24th gave undue weight to the “South Asia Faculty Group” and largely ignored the submissions by Scholars for People, the Uberoi Foundation scholars, HEF, and almost all of the public commentary.  There were many occasions during the discussions when the members of the IQC, CHSSP, and the publisher teams clearly admitted their lack of knowledge of the historic points being debated and gave undue deference to the scholars of the “South Asia Faculty Group” at the cost of considering the views of other scholars. As a result of this bias towards the SAFG, many edits were accepted that, as we show in the Appendix, are factually incorrect or at the very least severely confuse political, geographic and civilizational references. For example, the IQC decided to change “India” to “India (South Asia)” in most cases in an apparent bid to accommodate the SAFG and also not violate content standards. This move cannot be justified by either scholarly rigor or by community sentiment. It is singularly discriminatory considering that such a change is not being made for other ancient but still living civilizations whose borders may have changed over time such as China.

We have reviewed every edit that was discussed by the IQC (as listed in March 24th meeting’s Summary of Actions). We understand the challenging situation presented to you by the submission of multiple edits by various scholars, parents and community groups, and we have in the attached appendix evaluated several of these to offer our best recommendation (and avoid the unfortunate deletion of several important changes on the grounds of there simply being “conflicting suggestions”). We hope you will find our scholarly evaluations, easy-to-compare presentation format, as well as recommended actions helpful (Appendix C). Finally, we wish to convey our appreciation to you for not closing this issue prematurely and for revisiting your earlier decisions. We cannot emphasize enough how important it is for the IQC to treat the Indian American community with the same respect and fairness that other communities are treated in the process, and hope that our additional scholarly input will help you do your best for California’s school children.

The dangers of a “centralized” Hindu voice