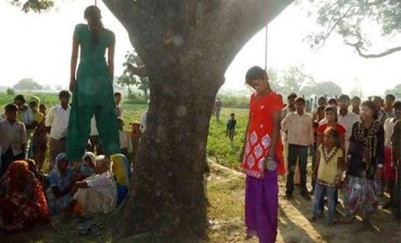 There is a danger in turning incidental criminal acts into grand narratives about society. The New York Times made this point in cautioning against creating broad narratives of society based on the misogynistic murders by Elliot Rodgers at the UCSB Campus. However, unlike other incidents of rape in India, such as the Nirbhaya case, the rapes in Badaun stand out for the obvious caste dimension. Akshaya Mishra, writing in Firstpost, points out how Mulayam’s rise fueled anti-Dalit violence.  But he fails to note the rhetoric of secularism that fueled Mulayam Yadav’s rise.

The secular left intelligentsia considered itself to be fighting two evils, what it called casteism and communalism. The seculars saw communalism as the bigger threat mainly from the perceived danger of “Hindu majoritarianism.” Conversely for RSS casteism was the problem because it divided Hindu society.

As the Sangh embarked on the ambitious project of de-emphasizing caste, with its shakhas and camps that break down ritual purity barriers, the secular left saw this as a challenge. They decided that “communalism,” what they termed the RSS attempt at Hindu unification, was more dangerous than caste divisions.  Emphasizing the caste split was explicitly seen as a strategy to keep communalism at bay. The caste-splitting strategy culminated in the work of the Mandal commission advocating reservations for OBC’s. This created the “Mandalization” of Indian politics with the rise of caste-based parties such as the Samajwadi Party and the BSP, along with Lalu’s RJD.

This Mandalization increased conflict between the OBCs and the Dalits. While stereotypical descriptions of Indian society talk about Brahminical oppression, the Brahmins were hardly a player in Dalit oppression. The “lower caste” OBC’s were more likely to be in physical conflict with the Dalits. This is also evidenced by the fact that Mayawati was able to forge alliance with the Brahmins in the BSP than with the Yadavs.

The Mandalization of society deepened caste conflict. The audacious rape and murder by Yadav boys in Badaun of two young Dalit girls was born of the arrogance of “their” government being in power and of knowing that ”their” Yadav policeman would not act against them. On the one hand, the secular left castigates Hinduism for caste divisions. On the other hand it sees the RSS, which seeks to erase these divisions, as the enemy. The secular intelligentsia’s attempt to make Badaun into a cultural crime of Hindu society side or blaming it on the patriarchal Yadavs sidesteps their own responsibility in aiding and abetting the resurgence of caste-based parties for the aim of fighting communalism.

Mulayam, Mayawati and Lalu have ben secular heroes. While the BJP was turned politically untouchable, these parties were lionized for keeping “communal forces” at bay. Even as late as a few months ago, the left “liberal” commentators were pinning their hopes on these parties to come together in a secular front to defeat the evil BJP. It is not surprising then, that as the outrage against the rapes grew, Akhilesh Yadav proffered a formal reminder of their secularism credentials, “as their fight was against communalism and their party has throughout followed the path of secularism.”

After all, this secularism mantra had worked so well before for the Mulayams and the Lalus. Like a raksha kavach, as long as they chanted secularism, media and the intelligentsia had been happy to overlook the egregious parochial, narrow-minded, corrupt, hierarchical, nepotistic, misogynist actions of these caste-based parties. This Faustian bargain was struck so they could save the country from what they considered as the “biggest danger” of communal forces, sampradayik  takten, aka the BJP coming to power.

There is another dimension to secular complicity. The secularists turned apologists for the most extreme Muslim factions and actions. Even the cold-blooded murder of a bogey-full of Hindu pilgrims, mostly women and children, by a Muslim mob, reminiscent of corpse-filled trains from Pakistan during the partition, did not shame them out of the secular wonderland. They used reverse blame—it was because of Babri Masjid, these people were coming from Ayodhya, it was because of an argument at a train station, it was a Hindutva conspiracy. The secular darling, Lalu Prasad, even set up a hastily summoned commission right before the elections to “prove” the bogey spontaneously combusted and killed everyone in it. Never mind that such accidental combustion which kills everyone, locking them inside one isolated completely charred bogey, has never been recorded before or since. The trial court painstakingly uncovered the pre-planned plot to set the bogey and Gujarat ablaze. But no crime was too big in the secular cause.

No wonder then that Mulayam was surprised at the reaction to his “boys will be boys” comment. It must be because the commentators missed or deliberately ignored its secular subtext. Mulayam was making these remarks in Moradabad to a Muslim group after the Mumbai judgment that held a set of mainly Muslim boys guilty of brutal rape. His cluck-clucking at the unjust punishment was secular. In case there was doubt of its secular nature, Samajwadi party leader Abu Azmi made it clear “Under Islam, rape is punishable… any woman if, whether married or unmarried, goes along with a man, with or without her consent, should be hanged.” He could well have added an opinion that kaffir rape by the “boys” is, in any case, halal.

Mulayam and Akhilesh were naturally surprised and upset at the secular media for making a big fuss. If Lalu can waive away the horrific crime of a Muslim mob’s pre-meditated burning of a bogey-full of women and children, why fuss over a hanging or two, they would be thinking, all in the noble cause of upholding secularism and keeping the communal forces at bay.

Truly the secular buffaloes have come home to graze. For years the most heinous contortions and justifications have been produced in the name of secularism in India. The secular intelligentsia is again trying to spin and spin fast. To blame Hindu society is especially easy to sell to the West, uninformed of the nuances of Indian society and politics; others are trying to change tack and criticize their erstwhile secular Yadav heroes. What the secular intellectuals refuse to do (or do half-heartedly) is hold up a mirror to themselves and their role in deepening caste conflict and pandering to Muslim extremism and thus, indirectly, fanning Hindu extremism; all this for the messianic goal of “secularism”, a euphemism for anti-Hinduism directed against a single party.

We should not need the horrific murders of Badaun to remind us that pitting communities against each other will not take us forward. Nor will the calls to class struggle spare us violent horrors.  We need a human middle, building on our own highest traditions, that raises a voice against all extremism, against all violence, against all hate, against all poverty and deprivation, against pitting class and caste and community against each other and speaks of sabka saath, sabka vikas. The gruesome acts of Badaun can act as a catalyst for this reflection.