Secularism is a National Security Threat to India 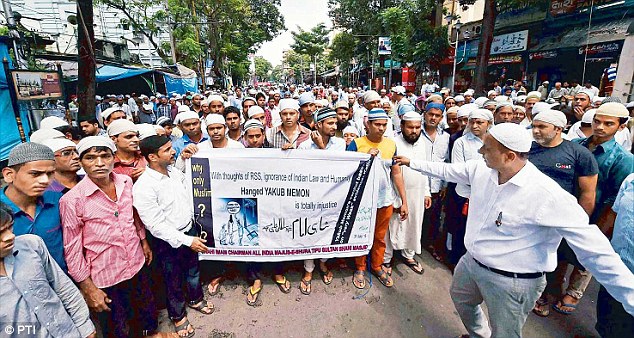 Every year in the rainy season, frogs come out and try to say something noisily. Similarly, during elections, some seasonal frogs emerge into India’s mainstream and proclaim loudly: “Muslim vote is secular; Hindu vote is communal;” “Long live India; Long live the Constitution.” Nowadays, the Jamaat-e-Islami Hind, All India Muslim Personal Law Board and the Jamiat Ulama-e-Hind are the leading advocates of the Constitution, not the politicians and police officers of India. Over the past year, All India Muslim Personal Law Board has been organising a series of conferences under the theme: “Save the Constitution, Save the Religion.” For them, if Islam is in danger, the constitution must be in danger too. The constitution and Islam are not separate for them.

The Urdu newspaper Roznama Inquilab, in its edition of February 10, carried a frontpage headline, which declared that the first phase of the assembly elections in Uttar Pradesh are “Musalmanon ka Imtehan”— a test for Muslims. Let’s imagine the following: what if the Hindi newspapers declared the UP elections as “Hinduon ka Imtehan?” The government will most likely ban such Hindi newspapers. Most probably, you will declare these Hindi newspapers as communal. But when Urdu newspapers do this, you think of it as secular. Your mind is caught by the sinews of a vichardhara, an ideology. This vichardhara is known in India as secularism.

Secularism has emerged as a national security threat to India. Every politician, every police officer, every journalist and every dharm guru knows that secularism is damaging the soul of India. Everyone pretends that everything is right. Cops find secularism as a textbook tool to run the beyawastha, the law and order founded on secularism. Kamlesh Tiwari said something about the prophet of Islam, he was arrested by police officers rightly. But the same police officers don’t have guts to even touch the Islamic clerics of Bijnor, who in 2015 announced a reward of 51 lakh rupees to behead Tiwari either in jail or outside. Secularism has emerged as India’s national sports; everyone participates, everyone pretends, everyone claps, everyone shuts their eyes to reality.

This reality is powerful. It controls minds. In an article in the Urdu Times newspaper of February 7, Urdu writer Muhammad Jaseemuddin Nizami interpreted the practice of secularism in India by an interesting analogy. A thief entered a temple, maintaining full respect and adopting pious manners; but his sole objective was to steal the statues of Hindu gods. Soon, he heard footsteps approaching him and turned back to see a man entering the temple without removing his shoes. The thief was incensed at this sin. He warned, “If I were not busy, I would be punishing you for committing this impiety in the temple!” The thief is secular. This is the truth of Indian society: the secular vichardhara is held aloft by thieves.

Nowadays, secularism views Dalit-Muslim unity as essential to its survival. In Mumbai, at a January 21 conference, Islamic cleric Maulana Khalilur Rahman Nomani joined hands with Dalit leader Waman Meshram, warning against any law to introduce Uniform Civil Code. In 1986, secularism also rose against the Supreme Court in the Shah Bano case. The Urdu daily Roznama Sahafat of February 6 quotes Justice (retired) Suhail Siddiqui, the former Union minister of state in his capacity as the Chairman of the National Commission for Minority Educational Institutions, as saying: “The need of the hour is that Muslims search for a solution to their problems by joining hands with Dalits.” Siddiqui brags that he “silently delivered minority status to hundreds of minority institutions and never in this regard issued a statement to newspapers.”

In a rare article of its kind in Roznama Sahafat of February 6, Sufi cleric Syed Alamgeer Ashraf makes some acerbic observations: “The essence of Indian people and the country’s democracy is that elections not be contested based on religion, colour and race. Despite this, a few days before the voting, Islam will be in danger. And Hindus too will be in difficulty. Only the elections will defend the Islam of Muslims and also protect the Hindus against all dangers.” Commenting on the secularism of Dalit-Muslim unity, he says: “It is necessary that such an alliance be for the victory of truth, justice, progress and humanity, not to defeat a specific person or a party.”

There are two meanings of secularism. First, as a movement of ideas it removes the excessive influence of religion from society. In this meaning, secularism undermines religious orthodoxies, frees individuals from the clutches of religion and empowers people to live their life in rational ways. Second, there is a constitutional meaning of secularism, which requires the Indian state to maintain distance from religion in policymaking. You cannot disagree with these two meanings of secularism. However, at issue is the third meaning of secularism. In its behavioural meaning, secularism influences us in how we understand day-to-day developments in our societies and impacts on the minds of policymakers, government leaders, journalists and others.

In its behavioural meaning, secularism has emerged as a national security threat. I have a message for the generation of my grandchildren. In your times, secularism will force Hindus to leave parts of Kerala, West Bengal, Bihar and Uttar Pradesh – much like Hindus were forced to exit Kashmir in my lifetime. As I write, secularism has risen in West Bengal like it rose in 1986 against the Supreme Court of India. Secularism successfully overruled the members of the parliament in the Shah Bano case. As I write, reports are coming out from Malda and other parts of West Bengal that police officers are being treated as thugs and criminals by those who proclaim to be secular. The government has no solution to secularism. Like termites, the germ of secularism eats at the roots of the Indian republic, feeding itself vigorously at the times of elections.