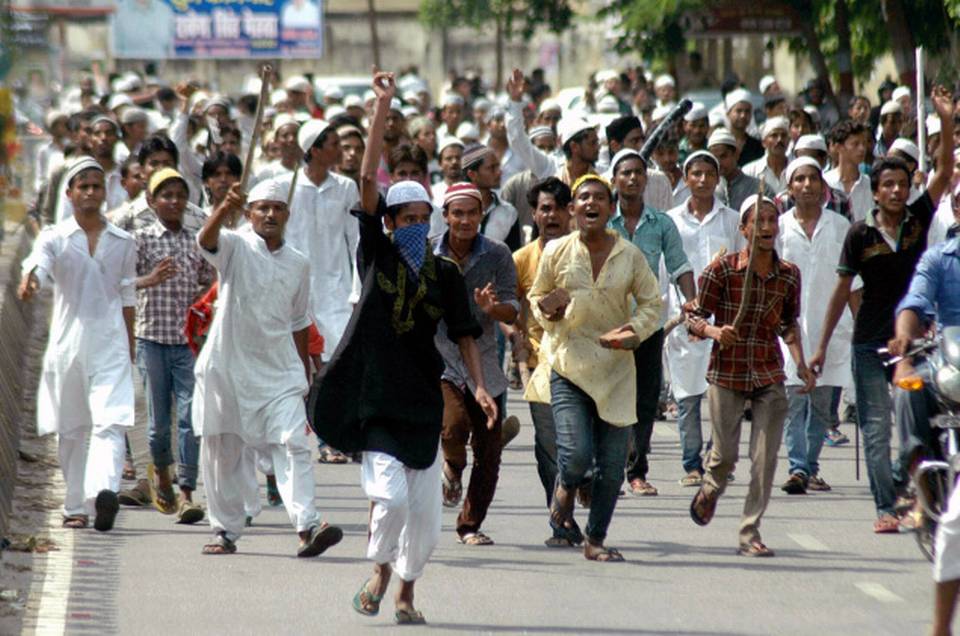 Many incidents which are reported as “normal” crimes are actually not “secular” but rather rooted in scriptural injunctions of supremacist ideologies. There are many instances where the perpetrators themselves admit that they were driven by ideological considerations. Yet media houses will either refuse to report it completely, or downplay the seriousness or give it a completely different spin especially where the perpetrators are Muslims. For example in the recent case of model Ushashi Sengupta’s harassment and intimidation by a Muslim mob in Kolkata, the English media houses did not even once name the accused. In fact they presented the incident, which was a clear case of violence and intimidation by a Muslim mob, into an altercation between “bikers” and an Uber driver and tried to downplay the seriousness.

The good news is that people are intelligent enough to discern the clear religious angle behind such incidents. Today people understand that when only Hindu owned shops are burnt in a Muslim majority area or when Hindu girls are abducted and raped by Muslim perpetrators, clearly there must be some religious angle. Social media provides data that people can now use to make their own judgements without having to rely on so-called “secular” media houses. People understand that love jihad is not a mere figment of Hindutva imagination but rather an unfortunate reality. Abductions of Hindu girls for conversion and forced marriage are a sad but lived reality.

Love Jihad is a term used to describe campaigns under which Muslim men target Hindu women for conversion to Islam by feigning love and often using sexual relationship as a tool for blackmail. Love jihad is often accompanied by what is known as rape jihad. While rape is a heinous crime prevalent all over the world, what makes rape jihad distinct is abduction and rape for the purposes of religious conversion. Such systematic religion–motivated abuse is now being recorded from Egypt to Pakistan.[i] In 2017, IndiaFacts obtained a copy of an FIR relating to rape jihad which exposes a fairly typical sequence in Rape Jihad.[ii] Love and rape jihad must be seen in the larger framework of Jihad. Jihad is a permanent doctrine of war by Muslims to be waged on non-believers till the whole world comes under the pale of Islam. Noted Pakistani scholar on Islam Anwar Shaikh summarizes jihad as a “binding contract between Allah and Muslims” where Muslims must fight against non-Muslims. Jihad become automatically applicable for all non-Muslims, since they do not follow Allah or accept Muhammad as the final prophet of the true God [iii].

In fact, Muslim men are often paid by mosques to entrap Hindu women. In this video, a Muslim youth admits that the masjid pays Rs 50,000/- to seduce Hindu women. It pays for their vehicle costs also. If he marries and converts a Hindu girl, he gets Rs 5 lakhs[iv].

Below I have presented a few incidents across Indian subcontinent only in this month. Do note that these are just a few representative cases, and represent a very tiny fraction of the real number of such incidents.

In a shocking case in Aligarh district of Uttar Pradesh, a person Zahid murdered and allegedly raped an infant Twinkle Sharma over a dispute of Rs 10,000 with her grandfather. On 30 May, Zahid kidnapped the girl and killed her with the help of accomplice Aslam. The body of the girl was found in a garbage dump on 2 June near a house in a dilapidated condition. A hand of the child was missing and the eyes had been gouged out. The father of the victim, Banwari Lal Sharma, fears she had been raped, too[v].

In Varanasi, a 9-year-old Scheduled Caste girl was sexually assaulted by Shahnawaz[vi]. In another shocking incident, an eight-year-old girl was raped inside a cemetery in the Chathia Jagannathpur village of Bhojipura district in Uttar Pradesh. The baby girl was admitted to the district hospital. A case has been filed against suspect Arbaaz who is absconding. At about 3 PM on 7 June, the girl was playing at a park when the suspect Arbaaz waylaid her. He threatened to kill the girl if she raised her voice. Then he raped the minor girl. A passerby heard the child scream. He rushed to the village to complain, where the victim’s father came to know of the incident. The girl’s father and villagers later found in a pool of blood, crying of pain. Police detained the brother and brother-in-law of the suspect. They are on a lookout for Arbaaz. [vii]

In another incident in in Barabanki in Utttar Pradesh, an 8 year old girl of Tikaitnagar area was raped by 40-year old Salim. He waylaid the child in his cab under the pretext of a joyride and then raped her. The police arrested the accused after the victim’s family complained. Salim has been charged under the Protection of Children from Sexual Offences (POCSO) Act and kept in police custody[viii].

In another incident which garnered condemnation across India, a Muslim mob assaulted doctors in NRS hospital in Kolkata. Two junior doctors were seriously wounded – Paribaha Mukhopadhyay who suffered a depression fracture in the right frontal lobe of the skull; Yash Tekwani who is also admitted in critical care with head injuries. The trouble started when one Mohammed Sayeed (75) died during treatment. The deceased person’s grandson Ali, a self-confessed Pakistan lover, exhorted a Muslim mob to come so that they could take revenge on the doctors who had apparently caused his grandfather to die. Not unsurprisingly, none of the newspaper mentioned anything about a “Muslim mob” choosing instead to call it a skirmish between patient’s family and doctors[ix].

Recently in a shocking incident in Kolkata, model and actress Ushashi Sengupta was harassed by a mob of Muslim “youth”. They damaged the Uber she was riding in and badly beat up the driver. They even followed her all the way to her house and continued the violence. The police point blank refused to help her citing jurisdictional issues. They initially even refused to register an FIR. The accused have been identified as Sheikh Rahit, Fardeen Khan, Sheikh Sabir Ali, Sheikh Gani, Imran Ali, Sheikh Wasim and Sheikh Aatif. Here is the incident in her own words[x]:

“Last night 18th June 2019 at around 11:40 pm I took an uber from JW Marriott Kolkata to go back home after finishing work…. We were taking a left turn from the Exide crossing towards Elgin while few boys in a bike (without helmet) came and hit the uber. To which they stopped the bike and started yelling at the driver. In a fraction of second there were 15 boys and they all started banging the car window and dragging the driver out. They dragged the driver and started beating him up. This is when I stepped out and started shouting taking a video of the incident (attached below). I ran across the street to Maidan Police station , I saw an officer standing and I requested him to come with me, he told me that this is not under them but under the jurisdiction of Bhawanipore Police station.

To my utter surprise the boys followed us till my colleagues house … came and stopped my car, threw stones, broke the car. Dragged me out and tried to break my phone to delete the video.

…After raising a lot of questions the officer took my complain but refused to take the uber drivers complain stating that 2 FIR’s can’t be taken for the same complain. And he told me that it’s against the law. My uber driver insisted that he wants to do the complain but the officers didn’t take it. I am attaching the video of the mob and the picture of the broken car.

… if you are getting mobbed , violated , molested or even killed please be assured about the jurisdiction of the police station before running to them. Because even if it is 100 meter away from your spot and not under the jurisdiction chances are very rare they will come and help.

… . To help others and stand up is a scary thing to do because the police who was 100 mtrs away refused to help. The sub inspector refused to take my drivers FIR stating that it’s not under the law.”

Such incidents are not restricted to India alone. Recently in Pakistan’s Sindh province, in a shocking incident, a 13-year-old Hindu girl, Jamna Saami, was brutally raped by two men after forcing her to drink liquor. After raping her, they dumped her unconscious body in left in a sports ground near her neighborhood where her father and neighbors later found her. The video of her lying on the ground and writhing in pain, is shocking and deeply disturbing to say the least. The accused have been identified as brothers Roshan Shaikh and Rajab Shaikh[xi].

The situation in Bangladesh is no different. According to Shipan Kumer Basu, the President of the World Hindu Struggle Committee, the rate of Hindu girls who are raped is much higher than the official statistics for the general population and that the rape of Hindu women is generally not recorded in the official records. The Bangladesh Minority Council adds that: “Rape and other sexual violations of minor girls belonging to the Hindu community, mainly in rural areas, remain rampant. In the conservative society of rural Bangladesh, when a girl is violated in a village, the family is left with no choice but to migrate to India. In addition, in rural areas, pressure to convert to Islam is increasing with every year. In many cases, local authorities ignore such activities because they themselves believe that if they can convert a non-Muslim to Islam, then they will be rewarded after death. This belief has caused an upsurge in the religious conversion of Hindu minors and sometimes even of entire families to Islam.”[xii]

It is obvious that there has been a huge upsurge in the recorded number of such jihad incidents – love jihad, rape jihad or plain old intimidation jihad. Delinking the underlying ideology from the crimes will not solve the issue. Merely punishing the culprits (if at all) under some section of IPC will not prevent such incidents from happening in future. To tackle it one must first accept the scriptural injunctions behind these attacks and then plan an intervention which is deeper rather than mere surface level.

[i] Christian girls abducted and forced to convert to Islam in spate of horror kidnappings https://www.express.co.uk/news/world/681009/Christian-girls-abducted-forced-to-convert-to-Islam-spate-horror-kidnappings-Egypt

[vii] Arbaaz of Bareilly after Zahid of Aligarh, Salim of Barabanki https://www.sirfnews.com/arbaaz-of-bareilly-after-zahid-of-aligarh-salim-of-barabanki/

[viii] Salim of Barabanki after Zahid of Aligarh https://www.sirfnews.com/salim-of-barabanki-after-zahid-of-aligarh/

Featured Image: The Hindu [An unruly mob took the law into its own hands after the prayer of Alvida namaz in Lucknow 2012]