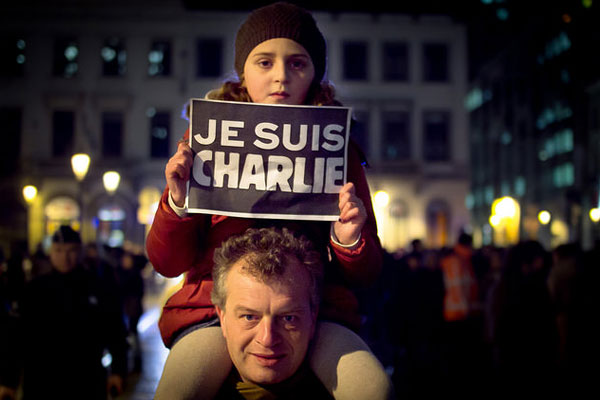 Shirin Dalvi, who was the Mumbai bureau chief of the Urdu daily Avadhnama till two weeks ago, has lost her job and is being prosecuted by the authorities and persecuted by her own community. Her crime? On 17 January, Avadhnama published an image of Charlie Hebdo’s ‘Je Suis Charlie’ cover. On 22 January, Thane police booked and arrested her “for outraging religious feelings” with “malicious intent” under Section 295 A of the IPC. Now, she is hiding behind a burqa.

Maharashtra Chief Minister Devendra Fadnavis also holds the Home portfolio and belongs to the Bharatiya Janata Party which has long inveighed against ‘pseudo-secularism’ and ‘Muslim appeasement.’ But, once in power, the party has succumbed to the same political proclivities it had earlier railed against.

No less hypocritical is the stance, or the lack of it, of our voluble media worthies, academics, and other sham champions of the freedom of expression. They are silent; not many newspapers and channels have highlighted the issue; and there is certainly no big debate, as it ought to be, anywhere. Eager to defend creative freedom when the subject is M.F. Husain, now they have turned a blind eye to the fate of a woman journalist.

“It was a clear news story. If you write about the terror attack on Charlie Hebdo, you also need to publish a relevant picture with it. That image has been printed in the Indian media in several places, but I am being singled out.”

Here is a woman whose fundamental right (Article 19, which says that all citizens shall have the right to freedom of speech and expression) has been infringed upon. She is being harassed both by the state as well as the society; and there is hardly any reaction, let alone outrage. She rightly pointed out that the supposedly offensive image was printed earlier in the Indian media. That the authorities did not prosecute other journalists shows that the act of publishing the supposedly offensive picture did not violate the constitutionally prescribed “reasonable restrictions” on the freedom of expression.

I find any kind of curbs on free speech as obnoxious; they render us not free but almost free—a state akin to being almost virgin. But, undesirable as they are, restrictions prescribed in the Constitution are still “reasonable.” That some tetchy characters get offended by something can never constitute reasonableness, for the simple reason that terms like offence and sentiments are subjective and reasonableness is objective.

In the case of Shirin Dalvi, legal action against her is not only obnoxious but also arbitrary. Many people separately decide to do something and they do that, but government chooses only one person for the act. This is little better than a witch-hunt.

[pullquote]I find any kind of curbs on free speech as obnoxious; they render us not free but almost free—a state akin to being almost virgin.[/pullquote]

Dalvi has also received threats. “My children have my old phone and they told me that someone has been sending messages through WhatsApp, saying “Maafi nahin milegi (You won’t get forgiveness),” she said.

Her plight, the rape of liberty, the arbitrariness of law-enforcement agencies, and the terror of Islamists in the Muslim community do not enrage our intellectuals. They decide to keep mum.

Equally thunderous is the silence of the Javed Akhtars, the Shabana Azmis, the Farah Naqvis, the Salman Khurshids—the folks who pass off as ‘moderate Muslims.’ Are the unaware of the plight of a 46-year-old lady who has been targeted by cops, hounded by her own community, and forced to wear a burqa for the first time in her life?

Our intellectuals and ‘moderate Muslims’ don’t tire waxing eloquent about such ideas as women empowerment and freedom of expression. They also pontificate about the need to confront and combat obscurantism, fanaticism, fundamentalism, etc. But when push comes to shove, they are usually found AWOL. They preach the virtues of secularism all the time, but when Islamism rears its ugly head, they are nobody to be seen. Paraphrasing Sahil Ludhianvi, one feels like saying: “Jinhe naaz hai secularism par wo kahaan hain…”