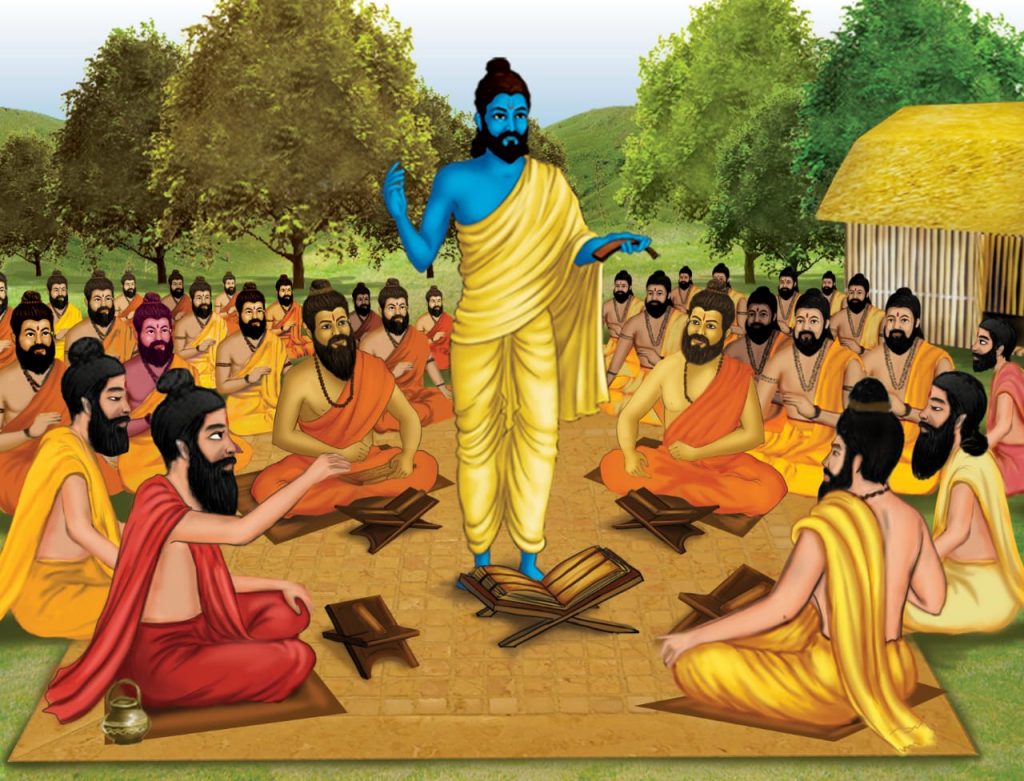 One of the absolutely critical issues for human destiny has always been education. The one civilization that raised it to the level of divine attainment is Sanatan Dharma though labeling it education, with its instrumental modern connotations, does not do justice to its native historic conception. The idea was to enable both individual spiritual development and the acquisition of disinterested knowledge. In the most prominent monastic temple centers of pre-Islamic Bharatvarsha, like Nalanda and Sharada Peeth, the celebration of knowledge was an emphatic and achieved goal. And they did not belong narrowly to any one Indic dispensation, contrary to subsequent ascriptions of sectarian identity to them, mainly by European travelers and British bureaucrats, anxious to infuse division among the ‘natives’ even when they were Indophiles, but working within a Semitic framework. The parlous contemporary misuse of temples is intended to keep worshippers subdued while plundering them for activities inimical to their very purpose and remains the single most egregious assault on the future of Sanatan Dharma. It threatens a permanent and potentially fatal injury to it in contemporary India that no iconoclast achieved in the past.

The proclaimed purpose of education today is to apparently create a skilled work force and nowhere more unashamedly than in India, constituting a narrowing of a proverbial psychological artery that grievously injures human well-being. Of course, it even fails to do that at the most essential level of primary and secondary schooling as well as in much of Indian higher education. In fact, the state has proven singularly unable to provide the necessary socio-political background in which even education in schools can be delivered successfully. What is happening instead, in much of India, is vast wasteful expenditure that is little more than welfare provision for salaried teachers and administrators and miniscule benefit for its intended principal beneficiaries, the students. The vaunted achievements of Indian IIMs and IITs would have occurred through self-motivation of the fittest in Indian society even if all these institutions ceased to exist. Their principal and mindless actual achievement is to subsidise the best and brightest for the benefit of countries like the US and UK. The wonder that is India indeed and the export of its labour has continued unabated since the endless slave caravans towards West Asia.

The other dimension is the preposterous attempt of Indian higher education to inculcate imported social science and humanities knowledge, particularly in the two that seem to brainwash most, history and anthropology. They merely spread a contagious virus of hostile colonial socialisation, with blatant imperialist aspirations. Much of this academic social science output on India, emerging from Anglospheric universities and echoed by Indian university departments, is a barely-concealed ideological concoction to delegitimise India’s moral and intellectual foundations and justify the successive conquests over it, with an imminent coup de grace to initiate total erasure. The recent libel against India by the world media is a testament to the efficacy of the strategy, which is only redeemed, from an Indian perspective, by its outrageous malice that disabuses Indians from harbouring any doubts about its purpose. No other ancient civilisation is subject to such minute scrutiny in search of any issues that can easily be distorted and turned against it. And the resulting academic texts are devoured across India and even imbibed by its trainee bureaucrats, turning many of them against their own civilisation and sceptics towards its aspirations. An absolutely critical initial stimulus to this assault was the Cold War and the goal of offering succour to Pakistan, a loyal camp follower during its progress. But evangelists have also been deployed to promote a narrative to harm India and remain the latter’s most determined adversary.

The outcome of this ideological social science and humanities mayhem is eventual unemployability for most students and their engagement in brickbat and Molotov cocktail violence directed at authority, for imaginary grievances in the interim. The spread of grotesque miseducation and intellectual nullity have become the unfailing handmaiden of destructive nihilistic protest in India that longs for the dissolution of the state and devastation of extant society, for purposes that are now utterly obscure. The Maoist model has evaporated completely, in  China exhibiting all the textbook attributes of fascism, though many thousands perished trying to import it into India by engaging in copious bloodletting. Even now some highly-paid Indian academics abroad write of Maoist violence nostalgically, no doubt conveying gratitude to the US for being one of its original allies. And no one is seriously hoping for a society governed by the Shariah that now amounts to Anglo American-sponsored Wahhabi brutality of lashings and beheadings. In recent years, subversive foreign think-tanks and higher education institutions have also been granted free rein in India, applauded by an Indian Right Wing that has cheerfully and ignorantly adopted this contemptible anti human self-ascription.

One of the self-serving, enduring myths of modern education has been the idea of the power of reason and its primacy in changing perceptions and human action. This was the promise of the Enlightenment but cannot be taken at face value because most of humanity is not motivated by rational judgement alone. There is a key distinction between the hard sciences, mathematics and philosophy and the realm of ideas that constitute the social sciences, including economics, which has the greatest pretensions to methodologies of the hard sciences. Of course, it is only an apologue because the bedrock of economics has always been ideological and a defence of status quo, with mathematics thrown in after the 1950s to insinuate respectability and perpetuate illusions about its purpose.

The extraordinary partisanship of much historical writing and the instrumental essentialism of much of anthropology should already lead one to suspect their integrity and political actual use for mundane aims by interested countries. The fabricated analysis by leading British historians writing on the Second World War is easily demonstrable because alternative sources of verification exist to highlight routine lies. As for anthropology, it never overcame its cynical colonial origins to better control subject people and remains a vehicle for identifying polarisations among objects of Western political manipulation and domination. In any case, most of humanity’s beliefs and actions arise from crass self-interest or effective socialisation through instrumental conveying of ideas rather than any disinterested reasoning based on compelling evidence. A phenomenon of stable collective conversational norms thus come into being in society owing to socialisation and they resist undue dissonance because that would make societies unstable. Thus, ideological socialisation and subliminal or direct religious inspiration usually triumph. This holds true as much for Harvard professors as it does for the ordinary mortal who unknowingly reiterates what has been purveyed by the media in recent broadcasts though the Harvard luminary is likely to be more calculating.

The key to persuading and creating identity is to socialise through education by choosing material suitable for the purpose and transmitting information that is consistent with the goals of authority, which in the case of India ought to be ideas that sustain social unity and promote building of the nation. In the present dangerous Indian predicament, a pragmatic solution is required to the issue of education and socialisation that will encounter the fewest hindrances and cost the least. But it must have the most potent impact for socialising vast numbers of Indians and prompt them to rise to the challenge of reinventing their motherland in something of its original self. A programme is urgently required to free Indian temples from political control and return the most significant of them to their original purpose of advancing knowledge that is consistent with the philosophies of the Vedas, Puranas, Upanishad, etc. and incorporated in ancient Indian epics. A suitable financial package to encourage private donations, with some public subsidy, might be provided too. And monastic temple education must prescribe most of the learning in Sanskrit as the medium of instruction to escape the terminological stranglehold of the English, German and French languages. These have long imposed alien concepts that created new meanings absent in the original ideas of ancient Indian texts and historical practices. These foreign tongues embody concepts that arose from their own specific history and culture, and usually Christian usage, which then created transformative re-interpretations of Indian texts absent in their original meaning, intent and social practice. This a problem recognised in semiology for more than a hundred years since the pathbreaking work of Ferdinand de Saussure established the study of language as a structuralist enterprise and the subsequent even more profound devastating subversion of the authenticity of truth-claims by Jacques Derrida. To quote historian of philosophy, Richard Kearney;’ the meaning of history is not merely disclosed by language, it is determined by it’.

In its place, instituting serious intellectual endeavour in major temples, which used to be the norm once, would allow the flowering of the only ontology and, in many instances, epistemology that is uniquely different from the dominant Graeco-Western conception of the universe. Intellectual exertion and imparting of knowledge in such an educational universe would include everything from astronomy, mathematics, grammar and language to the extraordinarily complex psychological insights into the human condition of ancient Indic traditions. As for India’s Western education system, it can continue on its merry way, some of it withering on the vine naturally as meaningful alternatives, emanating from temple scholars, make them archaic.

A secondary issue is the lack of enough relatively untainted textbooks that could constitute a curriculum. The solution is to ignore most of the imported social science books, especially on Indian history and anthropology though not all, and use ancient Indic texts, including its epics, according to logical subject categories implicit in them. It would also be appropriate to include in courses of study original Greek, ancient European and Chinese literature, on which generations of accomplished British administrators and politicians, who built their successful empire, were schooled. This literature frequently articulates the realities of societal and political power and how it is achieved and lost that is worth engaging with. Exposure to Western philosophical ideas (and major historical works) would also constitute a referential counterpoint to Hindu self-understanding since there are fascinating parallels in, for example, the philosophical issues confronted by such autonomous diverse traditions. In the meantime, an alternative in the mundane sphere of ‘social science’ literature might be sponsored that is mindful of the need to address issues relevant to Indian society and its functioning instead of relentless instrumental deconstruction from abroad designed to destroy it.