Surya Sen- The Hero of Chittgong 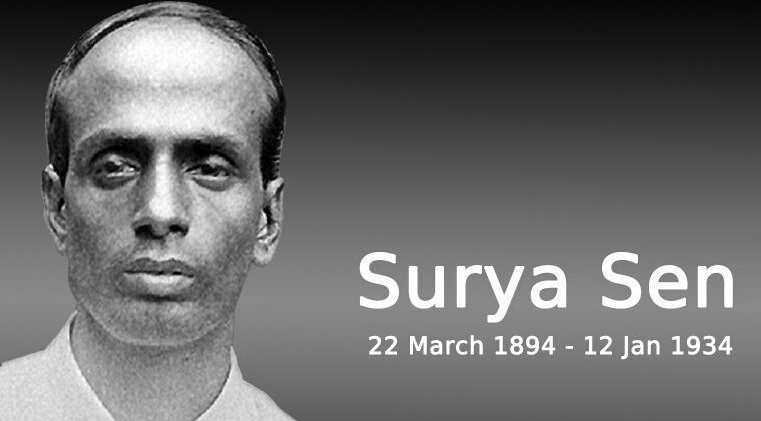 Revolutions all over the world have been a binding force behind the transformations and metamorphosis of societies. There have been myriad examples in the histories across the world that the undercurrents of changes and transitions have always played a significant role in bringing renaissances and reformations. Mass level awakenings are very much needed for it to transform to a wider awakening.

Such was the scenario in India in the nineteenth and twentieth centuries where we see the mushrooming of so many revolutionaries who had the single purpose of overthrowing the British Empire from there motherland. Such was the passion that they unequivocally strived to achieve this gigantic goal. Though their views were not in sync with the mainstream political struggle that was going on in our country but they relentlessly stuck to their aim.

One such uprising happened in the British India in the form of Chittgong Armoury Raid in 1930 under the ace command of Surya Sen. Writing on this important yet not so widely discussed revolutionary is commemorating some of the unsung heroes of our freedom struggle. Indian Freedom Struggle is one such war of independence where not only one force was working to get the motherland out of the shackles of slavery. Arguably, the organized struggle led by Mahatma Gandhi and the Indian National Congress has received much greater attention than the one fought by these Revolutionaries who even did not care for their lives. The Revolutionary Movement was dominated by the underground activities of the various rebel groups viz. Anushilan Samiti, Jugantar, HRA etc. Their main objective was to overthrow the colonial rule by armed revolution. Their daring and self sacrificing attitude inspired many youths to join their movement.

Though overtly it seems that the Congress party stands completely in antagonism to the Revolutionary Movement in India yet it can be noticed that the Extremist Branch of the Congress led by Bal Gangadhar Tilak was responsible for sowing the seeds of Revolutionary spirit in India. Tilak always advocated the cause for Swaraj and always led the radical wing of the struggle for independence. He is known for his quote in Marathi: “Swarajya is my birthright and I shall have it!” This assertiveness in his statement itself shows that how much adamant he was in his stand towards the British. Besides Aurbindo Ghosh, Rash Bihari Bose etc were the ones who laid the foundation stone of Radical activities in India. Among these Rebel leaders were born the great champion of India’s Freedom Struggle who shook the basic underpinning of the mighty British Empire. This ardent struggler was Surya Sen who led the Chitgong Armoury Raid. It is very disturbing to see that this crucial event in our history has not been given its due place. This work is a small tribute to the remarkable contribution of the young fellow named Surya Sen whom we owe a lot as a nation. This is also a miniscule endeavour to make the present as well as the forthcoming generations aware of his great deeds.

Ideal and Unity are my farewell message. Rope is hanging over my head. Death is knocking at my door. Mind is soaring towards eternity. This is the time for Sadhna, to embrace death. Never forget the day of 18th April 1930, the day of Eastern Rebellion in Chittagong.

This is the farewell letter that this great revolutionary wrote to the fellow countrymen and asked them to dream of the ushering of the day of Freedom. He was later hanged on 12/01/1934 at a very budding age of 39.

In his last days it is noticed that this devoted patriot was brutally excruciated while undergoing severe incarceration. Such was his compelling leadership that his death provoked tremendous no. of youth in the country to come forward and join the national movement.

Surya Sen was born on 22 March 1894 at Noapara in Chittgong. His father name was Ram Niranjan Sen and mother name was Shashibala. His father was a school teacher himself. Surya Sen since his teenage had been under the humongous influence of the nationalist ideas. His first encounter with the freedom movement happened when he was studying in the college. Teenage is that period of life where the mind is free and nonchalant but for these revolutionary icons this was the age when there stint as a mature freedom fighter began. Similarly this young boy Surya Sen was prepared to traverse through the path of bushes and become the backbone of the nationalist movement in Bengal. While studying in a college he came across some revolutionaries of the leading Revolutionary group of Bengal called JUGANTAR. He got so inspired by their ideals that on his return to Chittgong he organized the group there also and spread it into the nook and corner of the Chittgong district.

Master Da as he was popularly called, was aware that they have very meagre resource to fight with the mighty British Empire, where the sun never set. As he got convinced of this fact he planned to fight Guerilla Warfare with the British. One of his successful undertakings was a robbery at the treasury office at the Bengal-Assam Railway at Chittagong on December 23, 1933 in broad daylight.

He is credited for making Chittgong in East Bengal, the hotbed of revolutionary movement. Surya Sen now filled in the vacuum created by the Bagha Jatin in Bengal. Jatindra Nath Mukherjee popularly called Bagha Jatin was a Bengali Revolutionary leader who was the central figure in the Yugantar Party. Bagha Jatin was deeply influenced by the ideas of Swami Vivekanad especially Vivekanad’s views regarding the indispensability of the free India for attaining the spiritual progress of the humankind. Jatin also organized various branches of the Anushilan Samiti in Bengal. His meeting with Sri Aurobindo in 1903 further ignited the revolutionary fervour in Mukherjee who was “entrusted” with the crucial task of setting up a network of secret societies and to train young men in the ideals of revolution. Sri Aurobindo considered him to be his “right-hand man” whose “very stature was like that of a warrior, a man who would belong to the front rank of humanity.” Such was the charisma of Bagha Jatin that after his death a big lull prevailed all over and the revolutionary activities came to a standstill. In this scenario the beacon went into the hands of Surya Sen who promoted the people not just males but also females to come forward and join the movement. Thus we notice the upsurge in the women participants in the revolutionary movement.

One very important aspect of Surya Sen that comes to the forefront is that the clandestine aim behind his joining the profession of teaching was to ignite the zeal to fight for justice among the children and youth.

There is one deviation in his thoughts when we see that initially he joined the Congress Party which at that time had been the strong and dominant force under Gandhiji’s leadership. He actively participated in the Non Cooperation Movement of Mahatma Gandhi but had exiguous faith in his principle of Non-Violence.

It is an immense irony that one who was participating in the movement of Gandhiji had very little conviction in his propositions. Imperceptibly he was having disillusion with the peaceful struggle of the Congress and his conviction grew day by day that armed resistance has become inevitable now. Therefore, he organized revolutionary activities in Bengal and looted the treasury of Assam-Bengal Railways to amass cash money to run these revolutionary activities. As a result in 1926 he was arrested to be released in 1928. After his release he again began to manage the rebellious movement in Bengal. He established the branch of Indian National Army in Chittgong and got appointed as its General Secreary. In reaction of this incidence, agitation broke out in entire Bengal. In the agitation procession and meeting Surya Sen described the further action plan of the revolution in front of the party members.

At this time Surya Sen established his detective group. Members of this group took training for making explosives in Chittagong. The revolutionaries prepared themselves for some big and effective event which proved to be tumultuous for the British Rule. That eventful day happened on 18th April 1930 when an armed uprising took place in the form of raid on the armoury of police and auxiliary forces from the Chittagong armoury in the Bengal Presidency of British India by armed Indian independence fighters . The raiders devised the plan of capturing the two important armouries of the British, destroy the telegraph and telephone lines and take hostage the British Government officials. The police armoury (in Police Line in Dampara) was captured by a group of revolutionaries led by Ganesh Ghosh, while another group captured the Auxiliary Forces armoury. Some 65 people took part in the raid, undertaken in the name of Indian Republican Army, Chittagong Branch. After the raids, the revolutionaries gathered outside the police armoury, where Surya Sen hoisted a national flag, and proclaimed a Provisional Revolutionary Government. The revolutionaries left Chittagong town before dawn and marched towards the Chittagong hill ranges, looking for a safe place to hide.

The Police then looked for these revolutionaries and gradually traced many of them but the fatal blow came when the supreme commander of the great saga of Chittgong Master Da aka Surya Sen was arrested on 16th Feb 1933 on the clue of one of his close associates Netra Sen . He became the victim of the treachery and betrayal of his friend. The trial that followed his arrest resulted into the announcement of capital punishment for him. Prior to hanging, the British officials tortured Surya Sen very painfully by breaking his teeth, limbs and joints with hammer. Surya Sen was hanged unconscious and later his body was put in a metallic cage and thrown into the sea. This is the chronicle of this charismatic leader who became immortal in the eyes of the people by embracing the supreme sacrifice. His revolutionary deeds generated cataclysmic momentum in the radical uprisings throughout the nation and resultantly many more such organized uprisings erupted. There are umpteen examples of such tremendous valours of so many unsung heroes in our chronicles. The need is to make all of us aware of them and their accomplishments.