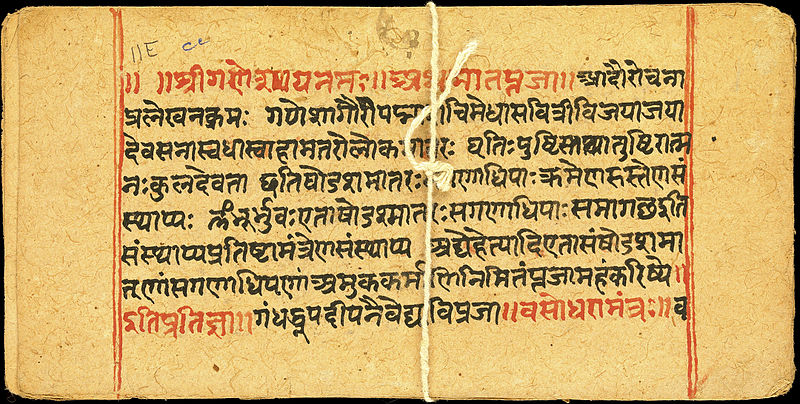 Benefits of Studying our Scriptures

Hindu Dharma states that every human being should have four aims in life: Artha (material possessions), Kāma (gratification of senses), Dharma (piety, performing one’s duty) and Moksha (liberation from the cycle of births and deaths). These goals might seem mutually irreconcilable, but the scriptures provide ways and means and frameworks for our lives and the society so that all of them can be achieved in a harmonious manner.

“… A young man working in Indian Army could not find any meaning in life and so contemplated suicide while sitting on a bench at Delhi Railway Station. But, suddenly he remembered that his sister was to get married shortly. So, he decided to postpone his suicide mission until the marriage or his sister. Next day, he went to a book shop to purchase newspaper when he came across a book by Swami Vivekananda which contained many inspiring thoughts like – ‘This life is short, the vanities of the world are transient. They alone live who live for others; the rest are more dead than alive.’ He made up his mind to live for others. Afterwards he took premature retirement from Army and received Rs. 65,000/ – as retirement benefits. He went to his village in Maharashtra and utilized this money to repair the village temple. With the temple as the focal point, he mobilized public opinion and stopped all liquor outlets in the village despite stiff resistance from the vested interests. He educated the villagers, both young and old, and started many economic projects. In a few years, his village was declared an ideal village by the Government. The Maharashtra Government then released grant for transforming some more villages. The name of the village is Ralegaon Siddhi and the person’s name is Anna Hazare. He was awarded Padmasri and then Padma Bhushan for his work. Just a small book by Swami Vivekananda gave a new direction in Anna Hazare’s life.”[1]

Scriptures, and especially the Vedas, are the yardstick by which we measure the morality of our actions and judge whether we are right or wrong.

In the Bhagavad Gita, Lord Krishna censures those persons who act without regard to scriptural directives:

When we read our scriptures, we learn how we can live a virtuous life and why doing evil does not benefit us in the long run.

Hindu Dharma seeks to address core questions related to our being – Who are we? What are we here for? Where do we go? What happens when we die? And so on. The answers to these questions are supra-sensuous, and cannot be determined through logical reasoning, or scientific experimentation. Hindus believe that our Holy books contain the wisdom of spiritually enlightened Rishis, Saints and Sages who had realized and understood these supra-sensuous or paranormal truths and therefore a study of these scriptures can help us answer our fundamental questions and doubts. In fact, Hindu schools of philosophy maintain that scriptures are the only perfect means of finding the true nature of Dharma and God because their true nature cannot be ascertained beyond doubt through other means such as perception by senses, or by logical inferences.

We can all eventually learn the principles of Physics, Chemistry etc. on our own if we spend ages trying to observe things first hand without the benefit of using any texts on these subjects or study under any teacher. But no one wastes time and energy in learning first hand through endless experimentation when one can conveniently learn from reliable books. Likewise, Hindus should consult and study the scriptures that contain collected wisdom on Dharma and Moksha instead of trying to figure it out again, and re-invent the wheel.

Certain acts of Dharma such as charity, construction of temples, rituals and so on require wealth. So what should a poor person do? Hindu scriptures state that a person who is unable of performing rituals should still not abandon practices such as study and recitation of the Vedas.

Reflection upon and recitation of specific hymns from holy books helps us in reducing the burdens of our sins.

Story: Ekanath’s son-in-law overcomes his bad habits with the help of Bhagavad Gita

Sant Eknath was a renowned saint of Maharashtra. He married his daughter to a famous scholar (Pandit) of the region. Unfortunately, this scholar fell into bad company. He started going out of his home late in the night, leaving his wife alone. Eknath’s daughter became very worried about her husband’s behavior and she spoke to her father about it.

Eknath then called his son in law and said, “Look here my son in law. You are a learned man, but my daughter is not. Do her a favor. Before you leave your home every night, please read to her a verse or two of the Bhagavad Gita. This will benefit her greatly. Then, you can go out wherever you please.” The Pandit agreed. So every night before he stepped out, he would read a couple of verses of the Bhagavad Gita to his wife, and explain the meaning to her. Slowly and slowly, the Pandit realized how beautiful the teachings of the Bhagavad Gita were. They started having an influence on how own mind. After some time, with the effect of the Gita, the Pandit stopped going out at the night. He had not intended to study the Gita for his own benefit. But nevertheless, the study of the holy book for the sake of his wife impacted him too in a positive way, and he became a virtuous man.

A traditional story is narrated from the times of the virtuous and scholarly king Raja Bhoja, who ruled central India in the 11th century CE. In his kingdom, there lived a virtuous Brahmana who was very learned in Hindu scriptures, but was very poor. The Brahmana was too proud to beg for food. But one day, he was so overcome by the hardships of poverty that he decided to rob Raja Bhoja’s palace.

He somehow entered the palace on a dark night, and reached the chamber in which the King was sleeping with his queen. Expensive jewels, gold jewelry and other costly items were scattered all across the room. The Brahmana could have stolen some of them, but just at that moment, he recalled the teachings of scriptures that one must not steal. Heeding the teaching, he refrained from the evil act. But now, he was realized that the sun was rising on the horizon and darkness was vanishing rapidly. There was no way he could free from the palace in daylight. Scared, he quickly hid under the bed of the King.

Soon thereafter royal attendants arrived to awaken the King and the Queen with song and music. The King got out of the bed in a good mood, and said three quarters of a verse that praised the joys and pleasures of his life.

When the Brahmana heard these words, he could not restrain himself and uttered the fourth quarter of the verse, “But none of these remain when the eyes are shut.”

Startled the King bent down and saw him. His guards rushed to arrest the Brahmana. The King asked him the reason for his hiding. The Brahmana narrated how he wanted to rob the palace but that he recalled the words of shāstras at that very moment and therefore stopped himself. The King was pleased to hear the truthful Brahmana and said, “Since you have practiced the teachings of our scriptures, I will not let you go away empty handed. You certainly seem to be a scholar because you completed my verse. And I value scholarship and give gifts to poets in my kingdom.” Saying this, Raja Bhoja ordered that the Brahmana be sent away with costly presents.[2]

Hindus also believe that an intensive study of scriptures assists in recollection of our past lives. And when we learn about our former existences in different forms, we get less attached to this material world, and become inclined towards the path of spirituality, eventually resulting in Moksha.

When we remember our previous lives, we see the futility and the triviality of our current life in the larger scheme of things. And therefore, we start getting drawn towards the more real, and permanent entities, such as our soul, which survives multiple bodies; and God, who transcends the entire creation in space and time.

Reading scriptures is one of the means by which we can purify our bodies and minds, and make it a fit receptacle for spiritual enlightenment.

Study of Scriptures is indeed known to be productive of good results. It gives one the peace of mind, and leads to a direct vision of the Devas.

Therefore, a regular study of scriptures accelerates our spiritual growth.

The very act of recitation of Vedic scriptures is said to have a beneficial effect on our minds due to the combination of the sounds involved, and their soothing teachings. Study of scriptures gives peace to one’s mind and directs us towards the path of virtue and happiness.

Therefore, in times of great sorrow (such as the death of a family member); it is a common Hindu practice to organize a public recitation and sermon of Hindu scriptures.

Hindu scriptures are a sacred inheritance of all human beings. They are the wisdom of the Rishis and have been passed on from generation to generation to our present times by a devoted and continuous string of teachers and students. Therefore it is our duty to continue the tradition of their study and teaching. Many saints and sages have recommended the study of scriptures and Hindus should feel obliged to follow their advice.

Hindu scriptures also state that recitation of the Vedas and other scriptures are pleasing to Lord Vishnu and other Deities, due to which their devotees should do the same regularly.

Story: Ravana chants the Samaveda to get his Freedom

When the arrogant Ravana tried to uproot and lift Mount Kailash (the abode of Shiva) in his hands, Shiva taught him a lesson by pressing the mountain with a toe and crushing Ravana below it. Ravana was trapped, and was not able to extricate himself out of the mountain. The Rishis advised him to chant the Samaveda, as Bhagavān Shiva loved to hear its chanting.

Ravana followed their advice and started chanting Mantras from the Samaveda. Soon, Shiva was pleased and He released Ravana from the mountain. Shiva also granted him a boon.

We should study our scriptures so that we can teach them to others. Teaching scriptures to others is an act of charity or gift, and in fact this gift is more exalted than many other forms of charity:

It is fruitful to study Hindu scriptures for several other reasons:

Svādhyāya: Studying our Holy Books- I