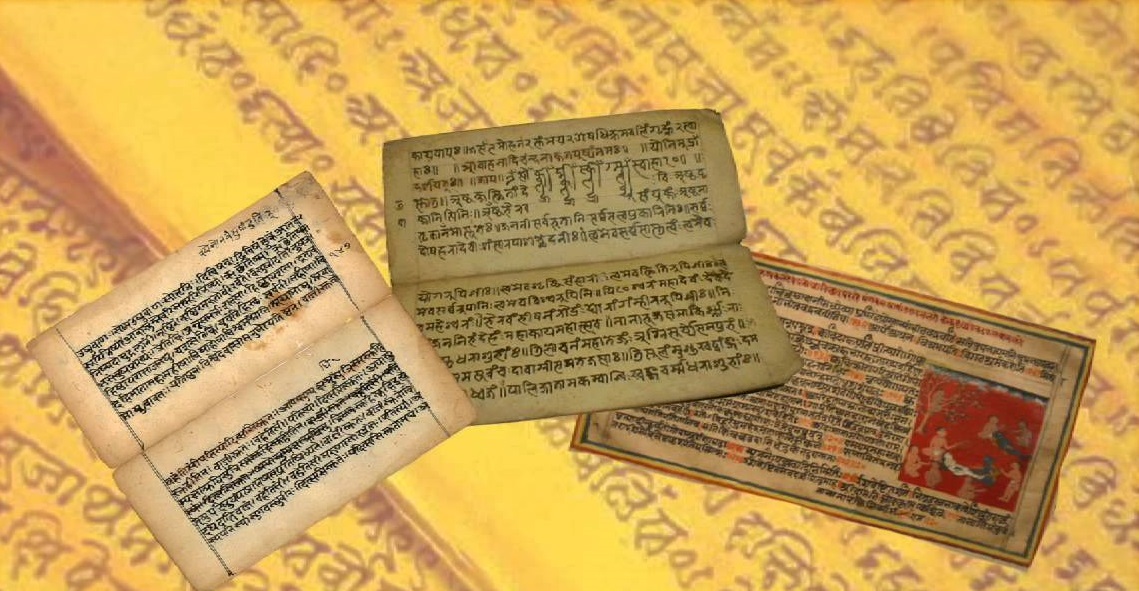 Hindu Dharma is not a ‘One Book, One Prophet, One God’ religion. The very fact that there are thousands of sacred books within our own tradition, and that thousands are Saints and Sages are associated with revealing and compiling them has made Hindus take it for granted that diversity of scriptures is a fact of nature. The existence of so large a number of scriptures within our own tradition makes it easier for Hindus to accept that religious traditions outside our own also have their own scriptures, and that these non-Hindu scriptures are also worthy of study, respect and reverence.

Hindu Dharma encourages us not just to get a well-rounded knowledge of all our scriptures (or as many as possible), but also study the Holy Books of other religions with respect. A scripture which says that it is itself is ‘the only true book’ and everything else is not worthy of study and respect is actually the product of the limited spiritual vision and world view of its author. This is why Hindus have not indulged in bouts of burning and destroying books of other religions. In contrast, the followers of ‘One Book, One Religion, Last/One Prophet, One God’ faiths have frequently burned the scriptures of other religions and continue to cause bloodshed and destruction even in our own times.

Instead of telling us to prove ourselves different from other peoples so that we can set ‘up our own prophetable shop’ for potential customers, Hindu Dharma advises us to look for common spiritual themes or the common essence of all these diverse scriptures. Therefore, instead of seeing these different holy books as disconnected and discrete pieces of knowledge, we should seek their underlying higher teachings.  For example, the Upanishad says:

This does not mean however that Hindus should accept any writing considered as sacred by any community as a holy scripture. The rule still remains that the Vedas are the golden standard by which all other scriptures are judged. Unfortunately, Hindus have carried the spirit of inclusivism and acceptance of diversity to such an extreme that they have ceased to see the genuine differences in the doctrines of different religions, and also fail to see the faults in various religious scriptures. Likewise, they have also started assuming that the Prophets and Saints of all religions were also spiritually realized souls in the Vedāntic and Yogic mold of Hindu tradition. However, when we actually read the sacred texts of other religions, and study the biographies of prophets and saints, the results are not always flattering. In fact, the Hindu tendency to see all faiths through their own spiritual viewpoint is patronizing and insulting to other faiths, whose followers openly reject the Hindu interpretations of their own doctrines which they have understood in a different manner traditionally. Therefore, instead of considering scriptures and important figures of all religions as equal, Hindus ought to use ‘viveka’ and try to discriminate between what is false, and what is true.

The two major categories in which all Hindu scriptures are divided are the Shruti and the Smriti.

Shruti: The Vedas constitute the Shruti, a word that means ‘that which has been heard (from God) by the Rishis’ and are considered of Divine origin[1]. The principles of Dharma that are taught in the Vedas are called the ‘Vaidika Dharma’ or ‘Shrauta Dharma’ and are considered to be infallible (without error), universal and eternal.

Smriti: The word Smriti word literally means ‘that which is remembered’. Human culture advances when the collected wisdom of the society is passed on from one generation to another (‘societal memory’), and each new generation adds to its inherited wisdom.

Whereas Shruti is considered of Divine origin or inspiration, Smriti is considered the wisdom of Saints and Sages who were pious, virtuous and had understood the Vedas. It is believed that the teachings of Smritis are derived from the Vedas itself. The Hindu tradition says that although the Saintly authors of the Smritis were enlightened souls, yet it is still possible that they had some imperfections. For this reason, the Smriti scriptures have a lower authority than the Shruti scriptures, which are directly revealed by or inspired by the perfect God. Smritis which openly conflict with the Veda are rejected.

“Smriti or ‘remembering’ is an eminently personal experience. One remembers what one has done or what has happened to one. Through memory one can appropriate and relive one’s past, and learn from experiences. These marks – appropriation, reliving, learning, and guidance – are all included in the sense of smriti. Smriti refers to that store of group experiences by which the community appropriates and relives its past, learns from it and is guided by it, and in the process shapes its identity. In so far as smriti has to do with personal experience, it is humanly authored (paurusheya in contrast to shruti proper, which is apurusheya or ‘not humanly produced.’ This is a crucial distinction for the ongoing life of a community. The non-personal Veda, received by the seers, which is religiously sacrosanct, linguistically immutable, culturally perfect…. Needs to be made accessible and humanized. Smriti probes, interrogates, debates, offers answers, mediates. It makes the impersonal personal. It allows the shruti to shape the world in which we live, and so to shape lives. For what may be smriti to you or your community, may not function as smriti for me or my community. Or it may weight this authority differently according to the particular traditions that nurture us, or the demands of our situations. Smriti is the medium through which we hear the voice of the shruti; it is interpretive, selective, collaborative, pliable. Shruti and smriti – or their equivalents, namely the primary scripture and tradition – are the co-ordinates by which the religious authority of Hinduism has been transmitted.

For Hindus, smriti recalls exemplary figures and events that have shaped their past, the universe they inhabit. These figures may be human or non-human, benevolent or hostile, virtuous or malign. Smriti pronounces on the origination and transmission of almost every branch of human expertise. Its concerns include how to use words, how to read the heavens, how to care for elephants, how to make love, how to make war, how to make temples, how to worship, how to go on pilgrimage (and where and why), how to dance, how to sing; how to classify men, women, horses, gems, snakes, herbs, dreams….how to curse and how to heal. Smriti deals with the founding of ancient dynasties and their ending; with the origination and destruction of the world; with rites of passage, the goals and stages of life, and cremation rites.

“Smriti can support primary scripture directly or indirectly through stories about gods, saints and sacred events, cautionary tales, graphic descriptions of heavenly and hellish realms, didactic discourses, the elaboration of codes of dharma, the sanctioning of reward or punishments for observing or violating these codes, and by recording the development of human expertise in prosody, phonetics, astronomy, love-making, war-waging, temple building, icon-shaping, philosophy and theology and so on. The amount of accumulated material that counts for smriti over the past 4000 years is immense, and in the more articulate world in which we live this material is increasingly rapidly all the time….”[3]

“….implementing smriti is a subjective exercise. What may be suitably corroborative material for my grasp of primary scripture may not be so for you; or you may use the same material in a different way. For smriti to function as smriti, what matters is the intention seen to underlie the material in question. An item of smriti may not seem to focus on primary scripture at all, e.g. a treatise on erotics, or grammar, or astronomy, but it is regarded as smriti because it is seen as intended to further – or is made by those in appropriate authority to bear upon – the aims of the shruti or primary scripture. For instance, it may do this by enabling an appropriate lifestyle to be followed, for it is only on this basis that scripture would be efficacious.”[4]

Although the word Smriti may be used in general to denote all the non-Shruti literature, it is often used in a more restricted sense to denote only the Dharmashāstra scriptures. Traditionally, the Dharmashāstras are considered the second only to Shruti in terms of authority. Therefore, they are more authoritative than the Purāṇas, Itihāsas and all the other non-Shruti classes of scriptures.

There is a class of Hindu scriptures called the Āgamas which are accepted only by the sampradāya or the tradition to which they belong. For e.g., the Vaishnava Āgamas are followed only by worshippers of Vishnu, and the Shaiva Agamas are accepted only by worshippers of Shiva.  The Āgamas are also referred to as Tantras, especially those belong to the Shākta and Shaiva traditions. Sometimes, the followers of these Āgamas consider their own Agama text as at par with Shruti. It is for this reason that Hindu traditions sometimes says that the Shruti is of two types – Vaidika and Tāntrika. However, this view that the Āgamas are of equal authority as the Shruti is not accepted by all Hindus.

Shruti as the Supreme Authority for Hindus:

Practically all Hindus accept the supreme authority of the Shruti literature, with a few exceptions such as the Lingayyata Shaivite Hindus, who consider the Shaiva scriptures as more authoritative. Acceptance of the Vedic authority is often considered a hallmark of being a Hindu. For this reason, Jains and Buddhists are not sometimes considered as Hindus, even though they share their history, cultural heritage, ethical values etc., with the Hindu community. The case of Sikhs is more complicated, because their own supreme scripture (the Ādi Grantha) seems to accept the Divine origin and authority of the Vedas in matters of Dharma. However, modern Sikhs by and large do not accept the Vedas and do not consider themselves as Hindus.

Sometimes, the Agamas and Tantras are considered a second type of Shrutis in addition to the Vedas (Samhitā, Brāhmaṇa, Āranyaka and Upanishads). This is because according to some Hindu traditions, the Āgamas and Tantras were also directly revealed by Bhagavān.

Some Hindus also believe that the Bhagavad Gita is Shruti, because Bhagavān in the Form of Krishna revealed it to Arjuna. A majority of Hindus however believe in the chart displayed above.

Similarly, the school of Indian philosophies (Darshana Shastras) that accept the authority of the Shruti, even if for the sake of formality, are considered as Āstika (or ‘Believer’, ‘orthodox’) Darshanas; whereas those which reject the Shruti are called the Nāstika (heretical) Darshanas. The latter includes the Buddhist, Jain and the Chārvāka/Bāhrsapatya (atheist and materialistic) Darshanas.  The former includes the Hindu Darshanas of Sāmkhya, Yoga, Vedānta, Pūrva Mīmāmsā, Nyāya and Vaisheshika Darshanas.

The chart below shows the major categories of Hindu sacred literature.

[1] The word ‘Rishi’ is derived from the Sanskrit root ‘Drish’, or ‘to see’. In other words, the Shruti is the record of the spiritual vision, or insight into the Divine of the Rishis.  The Rishis were pure hearted and spritually advanced individuals who devoted their entire lives to Dharma and Moksha. Women Rishis are called Rishikas.