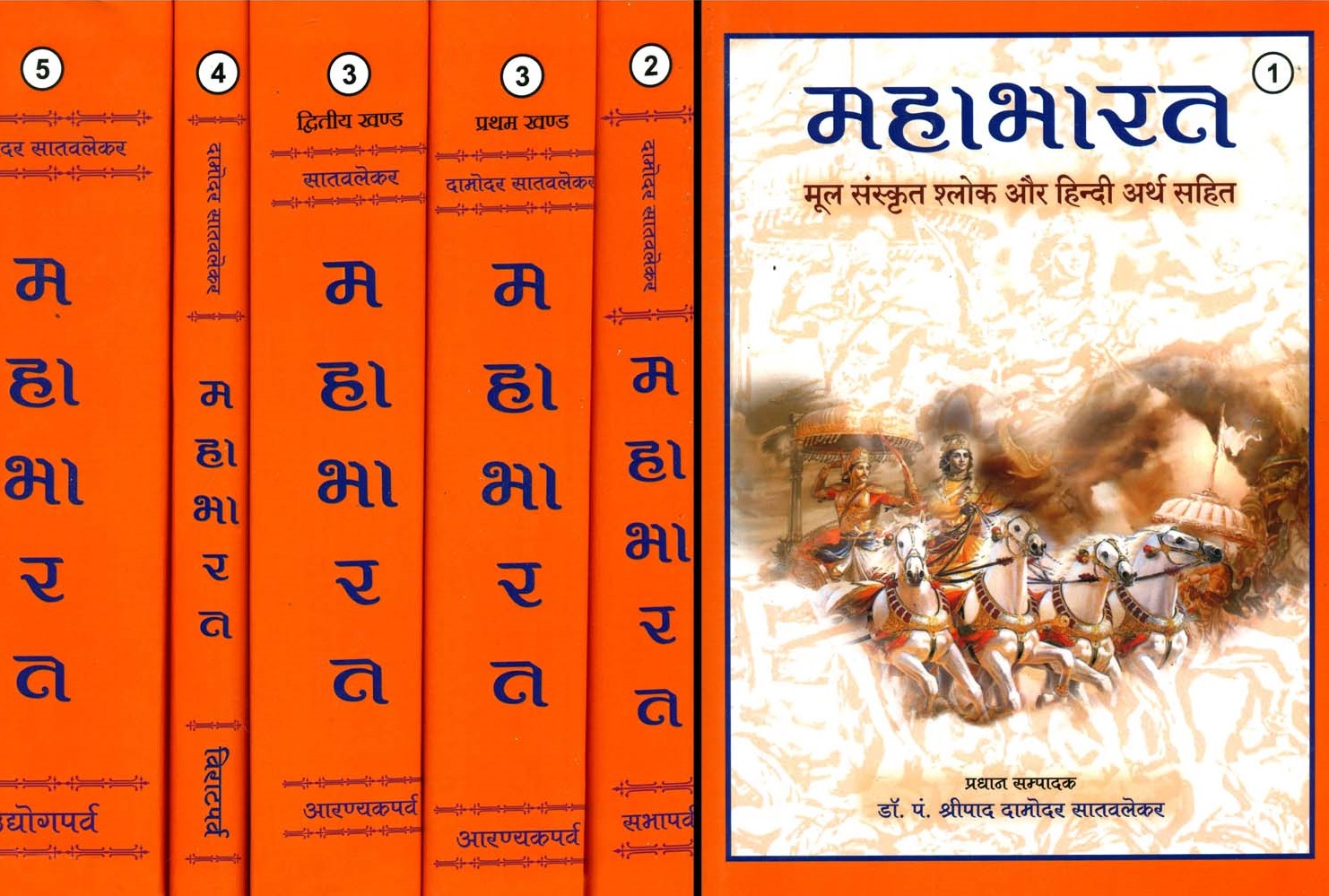 These texts are extensive compendiums of the history and sacred traditions of Bhāratvarṣa (the earlier name of the Indian subcontinent). The Purāṇas may be thought of as core texts of Hindu religiosity; some have become cornerstones of particular devotional traditions, and others have served as templates for institutions, social observances, and traditions of secular knowledge. They combine elements from the Vedas, Upanishads, Darshanas, Āgamas, Itihāsas etc. to present an eclectic form of Hindu Dharma to the lay people.

The word Purāņa itself means “ancient,” and a good deal of Purāṇic lore may have coexisted with the Vedas themselves. An early datable definition is found in the sixth-century lexicon Amarakosha, which identifies Purāņa as that which has five characteristics (pañcalakshaṇa):

Although the Purāṇas all contain variations on these themes, none of them literally follows this definition, because the pañchalakshaṇa materials only make up a small percentage of their volume. Other topics covered include

There are 4 major types of Purāṇas:

The Purāṇas are works that most eminently represent the deep mythic structuring of Hindu civilization, and they are properly viewed as expanding upon, modifying, and transforming the orthodox religion of the Vedas, principally by the introduction of the idea of bhakti or devotion. It is the Purāṇas which, it is no exaggeration to say, assisted in the transition from Vedic religion to classical Hinduism, particularly a Hinduism that was more receptive to folk elements, popular forms of devotion and worship, and everyday arts, crafts, and sciences. The Purāṇas carry story about the gods who had become the objects of people’s devotion, as well as about the modes of worship of these gods; these gods are no longer Vedic gods, but the gods who form the Hindu trinity. Besides them, the Purāṇas speak of the battle between the devas and the asuras, and one can doubtless read the narratives as allegorical accounts of the struggle within each person between the forces of ‘light’ and the forces of ‘darkness’. The Purāṇas delineate the religious obligations by which each person is bound, and as such they are a guide to Dharmic living. The Purāṇas are a vast repository of Hindu lore, religious practices — yoga, vows, puja, prayers, sacrifices — and everyday customs.

The most popular among the Purāṇas is the Shrimad Bhagavata. The Shrimad Bhāgavata Purāņa is a  chronicle of the various incarnations of Lord Vishnu, but focuses on Krishna. Each Purāņa has a specific purpose and was first narrated on a special occasion. The purpose of the Shrimad Bhāgavata Purāņa is to enable a person to overcome the fear of death. Skukadeva, the son of Vyāsa narrated it to King Parikshit, when Parikshit was cursed to die in a week’s time. Since then, it has become a Hindu custom to arrange for week long recitals of this scripture in public gatherings.

1 Mahāpuraṇas: A list of eighteen Mahāpurāṇas (Great Purāṇas) accepted traditionally and often named after the principal narrator of the work, is as follows:

These eighteen Mahāpurāṇas, said to contain a total of 400,000 verses, are attributed to the divine sage Vyāsa, who is said have arranged the revealed material (along with the Vedas and epics) and transmitted them to disciples who further elaborated upon them. To the above list, the Shiva Purāņa is also typically added, bringing the number of Mahāpurāṇas to 19. It is believed that there was originally 1 Purāņa that later lead to these 19 Purāṇas.

One method of the classification of Purāṇas deploys the traditional tripartite division of the guṇas or qualities which tend toward purity (sattva), impurity or ignorance (tamas), and passion (rajas). Thus, there are those Purāṇas where the quality of sattva is said to predominate, and these are six in number: Vishnu; Narada; Bhāgavata; Garuda; Padma; and Varāha. According to another scheme of classification, these are also the Purāṇas in which Vishnu appears as the Supreme Being.

A second set of Purāṇas, also six in number, are described as exhibiting qualities of ignorance or impurity (tamas), and in these Shiva is the God to whom devotion is rendered: Matsya; Kurma; Linga; Shiva; Skanda; and Agni. In the third set of six Purāṇas, the quality of rajas or blind passion supposedly prevails: Brahma; Brahmāṇda; Brahmavaivarta; Markaṇdeya; Bhavishya; and Vāmana. Yet clearly this mode of classification, which shows every sign of sectarianism, is inadequate, since none of the Purāṇas is devoted exclusively to either Vishnu or Shiva.

Among these Purāṇas, the Vishnu Purāņa and the Bhāgavata Purāņa (also known as the Bhāgavatam) are, with respect to their standing as works of devotional literature, preeminent; and the Bhāgavata Purāņa is even the supreme work of Krishna devotional literature. Since each of the eighteen major Purāṇas enumerates the other Purāṇas, it is reasonable to surmise that all the Purāṇas were revised at one point. Their length varies considerably: the Skanda has 80,000 couplets, while the Brahma and Vāmana Purāṇas have 10,000 couplets each.

The Gaṇesha and Mudgala Puranas are devoted to Ganesha. The Devi-Bhāgavata Purana, which extols the goddess Durga, has become (along with the Devi Mahatmya of the Mārkandeya Purana) a basic text for Devi worshipers. The Vishṇudharmottara is devoted to Lord Vishnu and so on. It has some of the earliest information from India on painting, sculpture etc., and has chapters devoted to symbolism of Vishnu and other Devatas.

There are many others all over the Indian subcontinent: most (such as the Padma Purāņa of Bengal and Assam, narrating the story of the goddess Manasā), written in vernacular languages rather than Sanskrit.

4 Kula Purāṇas: These Purāṇas deal with a caste’s origin myth, stories and legends (the word ‘Kula’ means ‘Family’ or ‘Tribe’ in Sanskrit). They are important sources for caste identity though usually contested by rival castes. Examples include the Vishvakarma Purāṇa of the Vishvakarma architect Brahmana community of Andhra Pradesh in India.

The ancient Sanskrit epics, the Ramayana and Mahabharata, also termed Itihāsa (History) or Mahākāvya (“Great Compositions”), refer to epic poems that form a canon of Hindu scripture. Appended to the Mahabharata is a supplement called the Harivamsha Purāņa.

1   Mahābhārata: Comprising of almost 100,000 verses, it is 8 times the length of the Greek Epics Illiad and Odyssey put together. Tradition says that the epic grew in size from 8800 verses to its current extent of 100,000 verses in several stages. The current form of the epic is dated to before 400 C.E. Hindus believe that the Mahabharata was originally compiled by Veda Vyāsa.

The Mahabharata is divided into 18 major books called Parvans. The Bhagavad Gita, one of the most important Hindu scriptures, is embedded in the 6th Parvan titled the Bhishma Parvan. The Gita has 700 verses in the form of a dialog between Lord Krishna and Arjuna, and some narrative verses by Sanjaya and Dhritrashtra. This beloved scripture of Hindus summarizes all the different strands of Hindu philosophy and is considered the essence of all Vedas. See Appendix I for details on the Gita.

The third Parvan (Āraṇyaka Parvan), 12th (Shanti Parvan) and 13th Parvan (Anushāsana) also contain thousands of passages related to Artha, Kāma, Dharma and Moksha. The story of Mahabharata is too well known to repeat here. The Mahabharata is said to be the longest (or sometimes the second longest) poem in the world. It has been said that whatever is not in the Mahabharata is not to be found elsewhere. The Harivamsha Purāņa, comprising of 15,000 verses, narrates the story of Lord Krishna and his family.

2 The Ramayana of Vālmīki: This famous Hindu epic, the source of several epics all over Eastern Asia, comprises of 24,000 verses arranged within 7 books. Hindus regard Lord Rama, who is considered an incarnation of Lord Vishnu, as an ideal son, husband and king. The story of Ramayana is too well known to be repeated here.

Numerous Sages and poets have rendered this popular Hindu scripture in Sanskrit and almost 16 Sanskrit versions of this text, based on the original, exist today. In addition, Saint Poets all over India have also written vernacular versions of the Ramayana in their respective mother tongues.

Amongst the countries outside the Indian subcontinent where this epic has been rendered in the local languages are: Mayanmar, Thailand, Laos, Malaysia, Indonesia, Philippines, China (Yunnan province), and Japan etc.