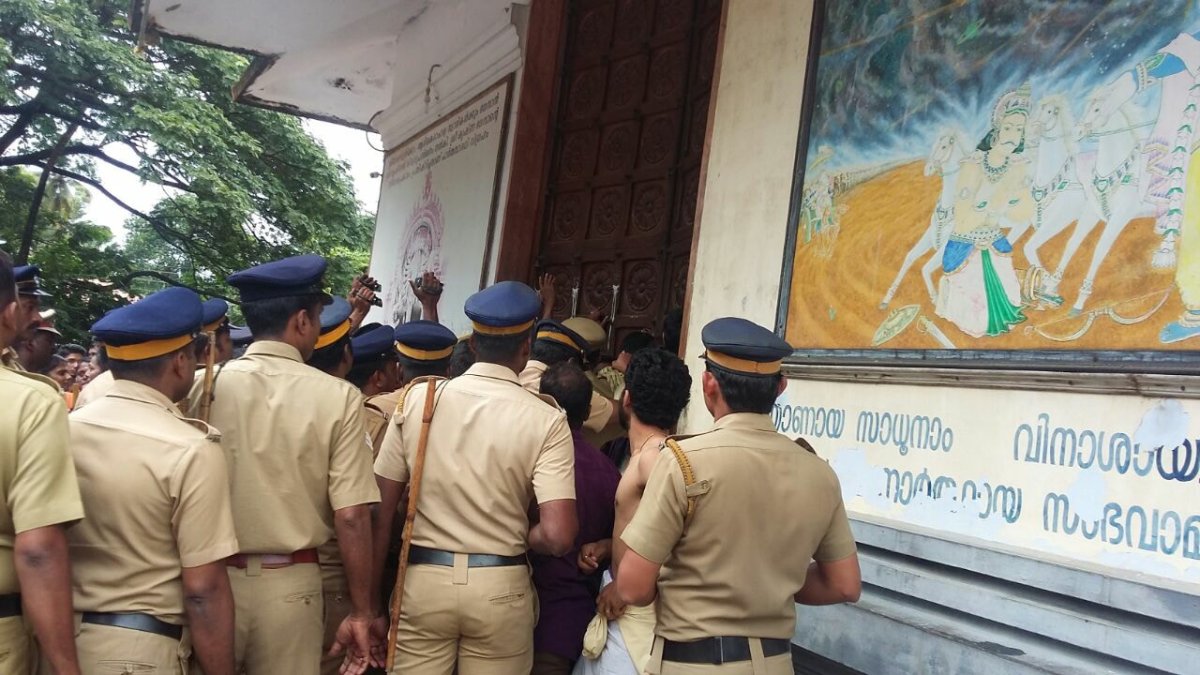 A plague struck Malabar 200 years ago in the form of Tipu from Mysore. The mighty temples of Malabar were ransacked and plundered by the merciless army of the tyrant. The utsava murthi of Guruvayur Sri Krishna Temple was safely taken to Ambalappuzha to protect it from the marauders. The Barbarians also destroyed a nearby temple of Sri Parthasarathy (charioteer of Arjuna, Lord Krishna).  Later in 1971, the murthi of Shri Parthasarathy was resurrected, and some people renovated the dilapidated temple. Little did they know, under the reign of people born as Hindu, armed force would again ambush their temple. The Malabar Devaswom board forcefully took over the control of the activities and properties of Sri Parthasarathy temple in Guruvayur using police force at wee hours of 7th of November. The Board officials have misused the order of Kerala High Court for the coercive acquisition of the temple in the dark.  Earlier in September 2017, there were tensions in the temple when devotees living in Guruvayur tried to block the police action and attempt of the Devaswom officials to take over the temple. They locked the temple from inside and opposed the takeover. As a reaction, the devaswom board approached the court and obtained an order to seek the help of Assistant Commissioner of Police to ensure the peaceful functioning of the executive officer of the Devaswom Board in the temple.

The temple remained abandoned more than half a century. The native devotees formed a society and renovated the temple and were performing all rituals that brought back the temple into splendour. As in any other wealthy temples in the country, the secular state and the political class got an interest in the administration and maintenance of this temple also. The case between the Parthasarathy temple society and the Devaswom board has been going on for the last eight years.   The arrogance of the Devaswom officials and violent encroachment into the temple premises was not befitting for any devout Hindu who value the sanctity of the temple. This barbaric act by the Malabar Devaswom board officials might be part of the declared intention of the government of Kerala and the political figures who control the Devaswom Board. In August 2017, the new president of the Malabar Devaswom has announced the board’s intention to take over all temples in Malabar region including those run by the Samuthiri family (erstwhile royal family of Kozhikode) accusing the family-run temples of nepotism and corruption.

A Temple is the abode of the devata. The Devata should be the primary person of significance in a temple. In the case of Parthasarathy temple, the people living in the area around the temple are the ones who have been taking care of the Lord and maintaining the temple. Can any politicians match their devotion and sadhana? According to the devotees of the temple, the issues escalated after one or two employees established a CITU (communist trade union) unit in the temple. Later another employee was reprimanded by the management for drinking and vomiting inside the temple. Also, there have been tensions following the installation of a Che Guevara poster in the temple premise. So reactions of the temple authorities against the apparent desecration of the temple premises with the symbols of an Abrahamic cult annoyed their local leaders. They retaliated by accusing the temple trust of corruption and mismanagement. Since the communists have power, they saw this as an opportunity to take over the temple under government control.

Here, the Hindus protested the undue interference by government and opposed the taking over in the court. Using police force, the government board officials took over the temple. The Devotees resisted using tooth and nail. Shall we call the devotees ignorant or apathetic? No. they have been fighting fiercely to protect the Lord and his properties. The temple once demolished by the barbarian Tipu has regained the glory due to the devotion of the temple administration society, who even purchased back around 126 cents of land which was occupied by various individuals. Would the politicians be so smitten by this temple had it not been wealthy? There have been hundreds of temples demolished by the jihadi forces of Tipu as well as the Moplah riots of 1921. The Kerala high court had ordered to recover thousands of hector of temple land usurped by various entities.  We never saw such a valour or duty bound agility by the Malabar Devaswom board in such cases.  According to Swami Bharati Maharaj, in this report, a total of 9,877.2 hectares of temple land under the Malabar Devaswom Board has been with encroachers. Not only in Malabar, but temple land has also been encroached upon by external entities all over Kerala. Since the secular government and the political parties are more interested in vote bank appeasement, the devatas, who were once the owners of the landed properties of the entire region remain shunned.

Though the temples of Malabar had been struck down by jihadi marauders, the nonchalant treatment towards the temples of Travancore was started by the British. Colonel John Munro, infamously known as ‘a committed Christian missionary as well as a ruthless colonialist’ initiated the ‘Secular politicking’ and social engineering experiments using the Kerala temples. The secular state under communists and socialists kept the temples under state control even after independence. The past 70 years accelerated the deracination of Hindus as well as degradation of Hindu temples. The secular government also attached the premier educational institutions and hospitals established by the Hindu rulers to the state, while allowing the organised religions to run their establishments and places of worship. Moreover, politicians and caste organisations colluded together to encourage nihilism in the post independent era. When the first communist government under EMS tried to bring in legislation on the State education policy, the church led vimochana samaram (liberation struggle) permanently blocked any intervention by the state in the affairs of Christian managed schools. All political parties rallied behind the church, including the Hindu caste organisation like NSS. However, none sought freedom for the institutions established by Hindu Kings and personalities. Six decades later, certain leaders of Hindu groups, as well as politicians, ask Hindus to reduce the expenses for temple rituals and festivals so that Hindus shall build schools and orphanages to strengthen the community like minorities.

What do devaswom boards do for the Hindu community other than ‘managing the temples? There has not been any transparency regarding the financial accounts of the offerings received in the temple ‘handled’ by the Government Board. The Travancore Cochin Hindu Religious Institutions (TCHRI) Act forbade the government from bypassing temple money for non-Hindu purposes. But the government-controlled Devaswam neither use the funds for the upkeep and propagation of Hindu religion and allied institutions or the benefit of Hindu community. The fund remains idle as a safe deposit for the political establishment from preventing empowerment of the majority community. Any debates on the wealth of the temples end up in a political dual between the seculars and so-called non-seculars. Communists cry Sangh Parivar fascism whenever any Hindu turn vocal against the blatant mistreatment of Hindu temples and the community in the state. During the Sabarimala case, honourable Supreme Court of India also had put forward the notion that funding from the consolidated fund of India makes temples an institution of the public character for which state is acting as a custodian. Such entitlement and transgression over the wealth of Hindu establishments after taking over all its wealth and making it public is nothing less than the despotism exhibited by the Christian colonials and Islamic invaders in the past. The secular state and its laws snatched the wealth of Hindu community and abandoned the community by crushing the culture and Institutions to decay.

Every talk about the freedom of temples from government control in Kerala ends up in political hullabaloo and name calling. What role should politicians who value secularism and votes from the minority communities more than the deity and temples have in the affairs of Hindu community?  Regarding the Parthasarathy temple also blame games are going on based on the political affiliation of the Devaswom board and the government. There are plenty of people asking for stopping offerings to the temples and calling for a widespread boycott of prasadam from Sabarimala temple and other temples run by Devaswom Boards under government control. Who will be the loser if a person boycotts the prasadam of the Devata or restrict oneself from offering money for the festivals and rituals in the temple? Are money and the politics only factor in a temple? At least with my knowledge of the Kerala temples, temples are the abode of the devata. The tantri and other caretakers of the daily rituals for the devata should perform the ceremonies with utmost devotion and responsibility. He is taking care of the day-to-day affairs of a living entity. Nevertheless, the political Hindus, as well as secular and communist politicians, are treating the temples and the controversies about the temples like another political power struggle. Can a poojari who thinks his job of taking care of the Murthi is same as a mere waged nanny job, put his life for the devata? Can a temple with such mechanical priest workers thrive with glory and power? Those who call for a boycott of temple festivals and prasadam also should remember that our temples are not just prayer halls but the house of living centres of energy. What is needed in a temple is not any political flags or salary accounting machines but devotion and concern for the wellbeing of the Dharmic community and revival of the civilisation of our ancestors.

Anjali George is an activist, writer and a reformer who is extremely passionate and ardent about the preservation of Indic and indigenous cultures. She is one of the pioneers behind the ‘Ready To Wait’ movement, that was launched to ascertain the rights of the indigenous women in opposition to a politically motivated attack on the tradition of Sabarimala temple. She serves on the Board of Frankfurt City's Council of religions, Indic Collective, and Shaktitva foundation. She is also the chairperson of People for Dharma.