The Congress today has become an impediment to reform 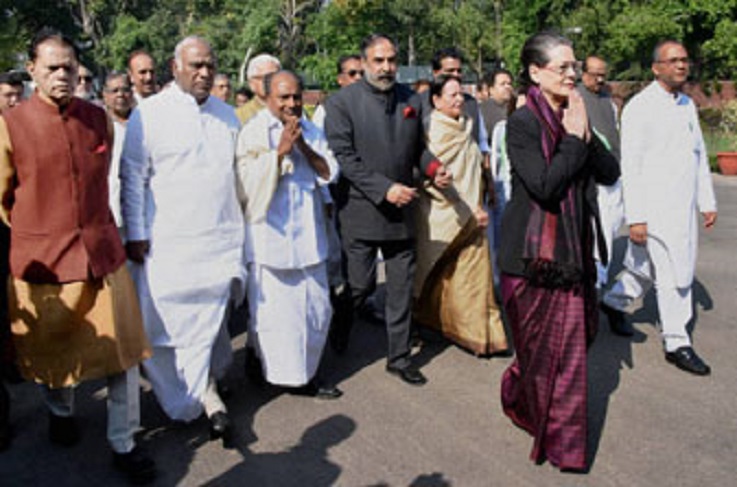 As we pass completing one year of the Modi administration, it is a matter of interest to record how negative the media has been of the Modi government despite the fact that few would doubt either its reformist credentials or its earnestness in pushing through a series of reforms in several sectors across the economy that should be able to inaugurate a wave of substantive economic and social renewal in the years ahead. The fact that Modi continues to top the polls is instructive.

The Modi Government can boast of several accomplishments. It has been free of scams and scandals. It is now common knowledge that it is difficult to move the corridors of South and North Block to push through sectarian agendas. While it will be some time before this practice percolates to the lower levels of government and administration, it is surely creditable that the Modi government has ensured a corruption-free year of managing the onerous task of government.

Secondly, it has scored significant successes in foreign policy. The Prime Minister’s visits to our neighbors and to virtually all the countries that matter to us (the United States, Canada, Australia, Japan and France) have been spectacularly successful. No Prime Minister thought it fit to visit Nepal in seventeen years! All these initiatives have helped India occupy global attention for the right reasons.

Prime Minister Modi’s Swachch Bharat campaign have elements of vision built into the project. His famous statement “I am not your Prime Minister but your prime servant” struck an emphatic chord. He has inspired a sense of hope and optimism and rope in political partners in an inclusive way. He has time and again said he is open to suggestions, welcomes differences and is willing to respect them. He has been able to co-opt corporate India into supporting the Clean India campaign that aims to provide complete sanitation by 2019.

Consider other developments such as the Jan Dhan Yojana:  more than 15 crore bank accounts have been opened and over 10 crore RuPay debit cards have been issued with life cover and pension, bringing cooking gas now under the direct-cash-benefit transfer scheme with a potential saving of $5 billion annually in subsidies, deregulation of diesel prices, allowing foreign equity in rail infrastructure, raising the cap in foreign equity in the defense sector to 49% and 74 % in case of technology transfer, putting defense purchases on the fast track are other tangible steps that have taken by the new government.

Yet other steps include allowing banks to raise funds, encouraging real estate and infrastructure investment trusts, increasing investment in the railways, inaugurating the smart cities project, concluding two hugely successful coal block auctions, introducing a new bill in the mining sector, launching the Make in India, Digital India and Skill India initiatives for job creation, establishing the Mudra Bank with an initial corpus of 20,000 crores to extend loans to small entrepreneurs, divestment initiatives in public sector companies, auctioning telecom spectrum for telephony and broadband, facilitating greater revenue sharing between the Center and the states, creating a price stabilization fund for agro-commodities to check inflation and establishing a Warehouse Infrastructure Fund with a corpus of 5000 crores to increase the shelf life of farm produce are other tangible steps taken by the government.

Admittedly challenges remain. Fiscal prudence must come squarely upon the agenda. Labor reforms need to be introduced, the government needs to address how to initiate steps to boost agricultural productivity, take urgent steps in bringing back black money especially since it was an electoral promise, taking steps to solve the contentious issue of the minimum alternate tax for cases in the past that have been in dispute and a number of still other issues related to making India’s manufacturing sector globally competitive, improving upon the private-public partnership model and creating a gas grid across the country.

However, what has been by far been the most disappointing development in the past one year is the negative role played by the opposition whether this be the regional parties, the left parties who have never been known for their constructive attitude or the virtually defunct Congress and its moribund leadership who have collectively shown their chronic inability to come together in promoting the reform initiatives of the Modi government. If they continue upon this path, they will be scripting their own destruction and help the BJP realize its dream of an India liberated from Congress rule.

Intemperate outbursts from within the ranks of the ruling party and its allies have not helped in creating a positive image. Despite the fact that the majority of church attacks were from lumpen elements, the government had to bear the brunt of an anti-minority tag. We can only wonder why Arun Shourie decided to take his disgruntlement with the Modi government into the public space and giving its opponents fodder to launch broadsides against the government.

Rahul Gandhi’s childish antics in Parliament do no credit either to him or the Congress. There is no introspection within the party and still no attempt to take ownership and responsibility for its humiliating defeat in 2014. His public utterances are tantalizingly vague, lack coherence and display no serious thinking on policy. Bereft of vision, surrounded by a poverty of ideas and adopting a pre-1991 tilt to the left in the name of a mythical socialism and an idea of secularism that is not grounded upon prevailing realities, the Congress is stuck in a time warp that has seriously dented its ability to reinvent itself. It continues to be stuck in outdated rhetoric that is widely perceived as irrelevant, hypocritical and cynical.

If the Congress is stuck in its failed historical orientations, the regional parties display no sagacity. It is the same tiresome rhetoric. The Aam Aadmi Party which began so well and registered a spectacular victory in the Delhi elections has little to show by way of accomplishment, circumspection in speech and temperance in its public utterances.

It is hard to endorse Rahul Gandhi as Prime Minister material. His interventions in Parliament are hard to take seriously. Nobody knows what he stands for and the direction that his party intends to embark upon. It is both tragic and ironic that it is under a louder and shriller Rahul Gandhi that the Congress has begun to play an obstructionist role that is blocking the developmental agenda rather than contributing to deepen social cohesion and economic well-being at a time when the country needs it the most. There is little doubt that it badly and desperately needs to reinvent itself. From all accounts, it is hard to see that happening.

While one year is a short time to evaluate the Modi government, it will have to move in three domains with speed and decisiveness. The first concerns deepening the initiatives that have been announced in multiple domains (agriculture, infrastructure, nuclear co-operation, tax issues) by backing them with visible action, sustaining the energy and momentum of the reform and most importantly, winning the war on communication. Perception matters.