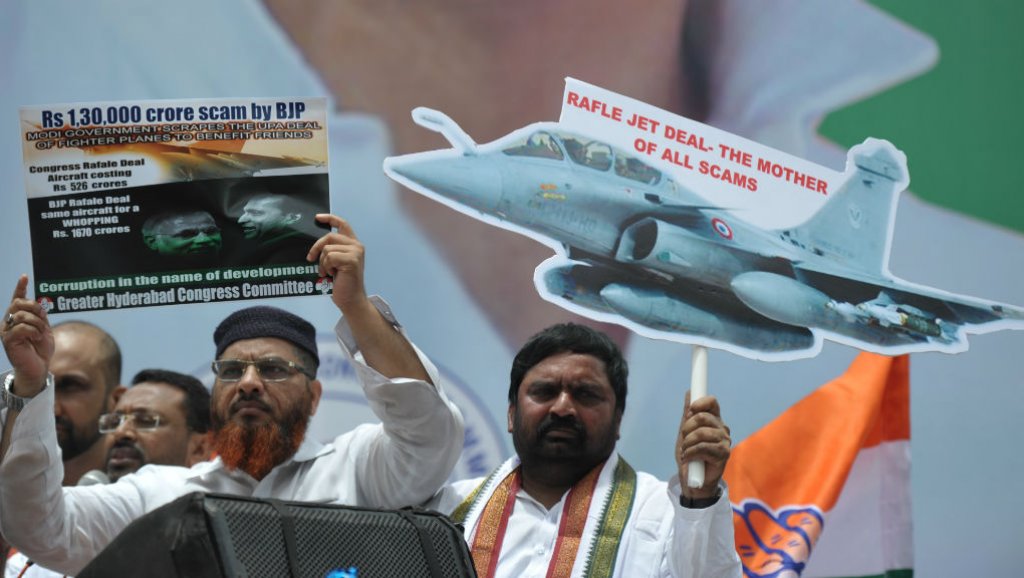 The relentless agitprop campaign of the Congress leadership, its pliant allies in the Indian Fourth Estate and in the rest of the country’s political framework has now reached a crescendo. It is evident that the command centres in 24 Akbar Road and 10 Janpath have decided on a no-holds barred approach in their campaigning, as the countdown to the 2019 national elections starts.

The heir-apparent, Rahul Gandhi, after having been advised by his strategic planning group in the Congress party war room, has zeroed in on the Rafale deal as an issue that he feels will yield rich dividends for his party. One assumes, for whatever it is worth, that he has done his homework and will not end up with egg on his and his party’s face. Nevertheless, it is bizarre to see a national political party that has glorious antecedents, descend to the level it has done in the last few decades. However, it is a safe bet that it has yet to touch rock bottom.

Be that as it may, the present ruling dispensation in Raisina Hill needs to be much more agile and effective in its responses to the opposition’s blitzkrieg. The BJP-NDA lot is increasingly giving the impression that it is a disheartened and fragile bunch of warriors who do not know how to effectively counter the panzer attacks from the secularist stormtroopers (SS), as this writer had designated them many years ago.

A few years earlier, just before the change of guard in India in the summer of 2014, I had studied the process of why and how entrenched regimes and empires had collapsed in the past, and the essay was published in this portal.

This study, had as its backdrop, the imminent collapse of the moth-eaten and corrupt Congress-UPA regime. After a period of recuperation and fresh injection of resources, the same bunch of venal and shady elements is desperately trying to stage their return to power. In this effort, every strategy is kosher and acceptable in their world-view. They strongly feel that their only task now is to throw enough mud and dirt against the present regime and then fervently hope that some of it will stick. I have written recently in other allied forums that the NaMo government will have to be much more resolute and focused in its rebuttals and counterattacks against the scurrilous propaganda of the earlier inhabitants of New Delhi’s Lutyens Zone[i] [ii].

In this essay, I will bring up some historical parallels to the present scenario in India. These will tell readers how similar efforts were made in the past to bring back previously ejected ruling structures or to dislodge regimes currently in power. The first parallel we need to study is how royalist forces in France tried to destabilise the revolutionary government and to bring back the former ruling clique. I realise that there will be Indian examples of this type of political processes, but they have not been as well documented as the ones I am spelling out in this article.

For the first case study, we have to go back to France in the first decade of the 19th century. In 1804, the French Revolutionary government had been in power for around 15 years, since the momentous Revolution of 1789. France, as the only revolutionary country in Europe, was surrounded by enemies on every side. The erstwhile French Royals were scattered all over Europe, with some of them in England, the perennial enemy of France. One of the prominent royalists, the Duke d’Enghien, was living in Germany in a village called Ettenheim in Baden, 15 kilometres from the French border.

The French security forces had information that he was in contact with enemies of the revolutionary regime in France (émigrés and royalists) as well as in England. The correspondence of the English Ambassador to France, a certain Sir Francis Drake, came to the attention of Napoleon, who was then the First Consul, showing that a prominent member of the previous ruling family, the Bourbons, would soon be arriving secretly in France.

At a meeting of the Cabinet on the 10th March 1804,Napoleon and his five colleagues decided that the Duke was guilty and resolved to kidnap him from Germany, realising fully that it would have enormous international repercussions. Accordingly, a detachment of French troops crossed the Rhine into Germany on the night of the14th/15th March and kidnapped the Duke d’Enghien,who was brought back to Strasbourg in France in a daring operation. The Duke, because of his international royalist ties, was initially confident that he would soon be released. However, the following decree was published on March 20: “The former aristocrat the Duke d’Enghien, is charged with bearing arms against the Republic, with having received and continuing to receive funds from England and with plotting against the internal and external security of the Republic. He will be brought before a military commission of seven members named by the Governor General of Paris, Joachim Murat, that will meet in Vincennes.”

The trial of Enghien was admittedly partisan and, possibly, did not meet the conditions of fairness and impartiality that French law itself prescribed. During his interrogation, he admitted to two crimes that made his sentence inevitable: having taken up arms against France and having received funds from England. The commission unanimously found him guilty and he was condemned to death. However, the legislation relied upon to convict him was inapplicable in this situation. It stipulated that any émigré found on French soil would be subject to the death penalty. However, the Duke had been arrested in Baden, in Germany. This was a mere bagatelle, as the revolutionary French would say. The Duke was shot on the morning of the 21st March.

This incident created ripple effects throughout Europe. It also gave rise to any number of statements, some of them apocryphal, no doubt. The most famous is : “It was worse than a crime; it was a blunder”, which has been attributed to Talleyrand, Fouché and others and denied by none of them. However, the French Republic and Napoleon emerged unscathed, if not stronger. All the European chancelleries kept quiet. The Prussians and the Germans virtually grovelled and so did the Spanish king. Only the Russian tsar ordered a period of mourning. The counter-revolutionary movement in France was virtually destroyed.

The moral of this historical episode is that a radically different government that has come into power by neutering the earlier venal rulers has to be very firm when dealing with threats that come from outside the country. At this stage, we will have to move forward to the middle of the twentieth century to study another incident that is of considerable significance to contemporary India.

This is the infamous Tukhachevsky episode, also one of the most tragic in modern military history. By the mid-1930s, the Red Army in the Soviet Union was emerging as a very strong and well-organised military force. Under the leadership of highly-skilled officers, some of whom had forged their skills and talents from the days of the Russian Revolution in 1917, the Red Army (including its air and naval arms) was helping the Soviet Union to becoming a global power. Among the acknowledged strategists in the USSR, was the inspiring Marshal Tukhachevski, whose doctrines of warfare were studied in military academies throughout the world.

In Nazi Germany, the Red Army was rightly perceived to be a major obstacle to German’s domination of Europe. Accordingly, Heinrich Himmler and Reinhard Heydrich were tasked with the responsibility of destroying the Red Army through sabotage and conspiracy. Knowing the pathological mind of the Georgian dictator Stalin, who was insanely jealous and suspicious of the Red Army leadership, Heydrich forged documents that apparently showed Tukhachevsky and other generals plotting with Germany against Stalin.

The Germans then came up with the master stroke of using a third country to pass the forgeries to Stalin. Initially, the forged Gestapo documents were passed to Dr.Benes, the highly-respected President of Czechoslovakia. Benes viewed the Soviet Union as a potential ally against a resurgent Germany and thought it was his mortal duty to warn Stalin about a possible conspiracy against the USSR.

Thus, began a suicidal wave in the Soviet Union that almost destroyed its sword arm. In two years nearly 37,000 Red Army officers were executed, shipped to the gulag, or dismissed from service. Those who were killed were probably luckier than those who were imprisoned. The scale of the purge was staggering: 13 of 15 army commanders, 50 of 57 corps commanders, 154 of 186 divisional commanders, 220 of 406 brigade commanders, all 11 vice-commanders of defence, 98 of 108 members of the Supreme Military Soviets, all army political commissars, 25 of 28 corps commissars, 58 of 64 divisional commissars. Even the lower ranks were not spared: almost half the colonels and 7,403 captains fell victim to the purge.

More Soviet generals and colonels were killed by Stalin and his henchmen than died in World War II. When Nazi Germany invaded the Soviet Union on the 22nd June 1941, the Russian guns were pointing in the wrong direction and the planes were all lined up in unprotected airfields.

The point behind my detailed recall of the Tukhachevsky episode is to highlight some of the events in our shores. Readers will easily notice the parallels. The Colonel Purohit incident will also ring alarm bells, along with the nauseous attempt by the UPA government to promote the concept of “Hindu / saffron” terror. One need hardly emphasise that the person who was touting this nonsense with no less a functionary than the American Ambassador in India was Rahul Gandhi. All of us should be conscious of the fact that sabotaging the IAF’s efforts to get a state-of-the-art aircraft like the Rafale will only benefit India’s enemies, primarily our western neighbour.

To conclude this analysis, let me emphasise that the Indian Republic is at a critical juncture. The possibilities for going forward and taking our place in the sun are very bright. However, there are strong inimical forces that do not want an Indian Renaissance for reasons that are evident to any thinking and rational person. The present regime is not ideal, by any means, but its leaders do have the necessary credentials. They know which route this ancient civilisation must take. Let us give them a chance – by no means a carte blanche, but a firm go-ahead with some cautionary advice when necessary.