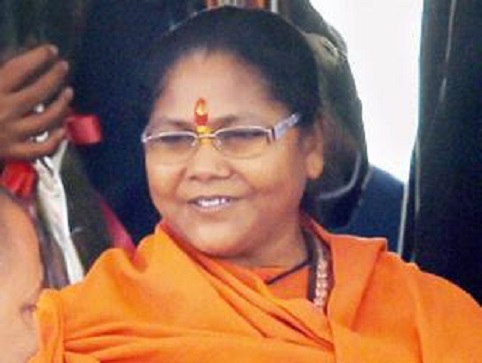 The Times Of India edition today has published a news story in the name of objective reportage regarding the controversial remarks made by BJP leader and Minister of State for Food Processing Industries Sadhvi Niranjan Jyoti.

On 1 December, the Sadhvi got involved in a bitter controversy when during an election campaign in Delhi, she asked the voters of Delhi to make a choice between ‘followers of Ram’ and ‘illicit people.’

The Minister since has apologized for the unfortunate remarks, but the opposition has been demanding her resignation and arrest, but one cannot help but notice the obvious ideological bias the TOI piece seems to harbor as can be understood from this extract:

The minister’s offensive remark is in a series of similar statements by Sangh hotheads that have made people wonder if they have the ruling dispensation’s tacit approval. The absence of any categorical condemnation of these remarks by the party brass has only reinforced the suspicion.

How the TOI can put the term “Sangh hotheads” in a report that appears in the headlines section is for them to explain. Then again the newspaper is famed for having eye-goggling statements to make it newsworthy from glossy advertisements to tasteless excerpts on actresses. And if one reads the aforementioned ‘report,’ it would seem the TOI is giving more off a judgmental sermon than a news report.

If one controversial remark can associate the Minister with the so-called Sangh hotheads what does TOI call the leaders of Congress who made such articulate statements in impeccably decent language:

1.      ‘I don’t understand whether the BJP is a political party or a party of dancers’ –Congress general secretary Digvijay Singh

3.      ‘Every day he repeats Dr. Manmohan Singh ….. Manmohan Singh………… Manubhai is sitting here …….Manubhai, the fact is that he is infected with rabies…. Manubhai, he has bitten by rabid dog…However Chief Minister, within your life what about your married life? Gujarat knows it. Why don’t you disclose it one day? And why it didn’t work out after marrying …’- Gujarat Congress President Arjun Modhwadia in his election rally speech in October 2012.

4.      ‘Ask the BJP to announce their candidate. They are always fighting like cats and dogs.’ – Congress leader the ever so suave Mani Shankar Aiyar.

5.      ‘I promise you in 21st Century Narendra Modi will never become the Prime Minister of the country. …But if he wants to distribute tea here, we will find a place for him.’- Again by the suave Aiyar.

Based on the aforementioned statements, shouldn’t TOI call these eminent leaders “Congressi Uncouths?” The TOI should know that a front-page ‘objective’ report is very different from biased editorials. And while it attacks the Sadhvi the TOI editorial team seemed to have forgotten this gem from one of their own: