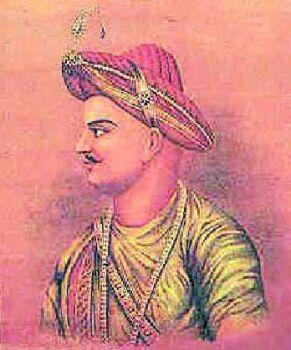 Assertion : In an article in the mainstream Kannada Daily Vijaya Karnataka on 10 October 2013, a ritual practiced in the coastal temple of Kollur was reported. The following is the translated summary of the original report:

To commemorate Tipu Sultan’s visit to Kollur, a ritual named “Salaam Aarthi” is observed every day. It is said that Tipu Sultan visited the temple of the Goddess Mookambika here sometime during 1765—1795 and offered prayers. Memories of this visit have come down the ages by the priests of the temple as an oral historical account.

Since the visit of Tipu, an arati named Salaam Arati is offered every day to the main deity between 8.00—8.15 P M. The people who perform this arati are known as Salaam Adi. This tradition has also been documented in the history of the pilgrim centre.

Tipu is not accused of destroying temples in the coastal and Mysore regions. Further, there is documentary evidence of Tipu making large offerings to the Srikanteshwara temple in Nanjangud and the Narayanaswamy temple in Melukote.

The Ranganathaswamy temple at Srirangapattana was at an earshot distance from a masjid. Tipu used to listen to the sound of the temple bells and the aazaan call of the Masjid with equal reverence. The Narasimha and Gangadhareshwara temples situated very close to his palace also were not harmed by Tipu. Further, according to Karnataka Charitre Volume 5, published in 1916 by Karnataka University Hampi, one Shri Narasimhachar found the letters written by Tipu to the pontiff at Sringeri. In these letters one finds the great reverence that Tipu had for Hinduism. There are other documentary evidences to show that the Seer of Sringeri and Tipu Sultan exchanged gifts.

First, the tradition of the so-called Salaam Arati like is not unique to the Kollur Temple. There are thousands of temples in the state that have the special arati like the one in the Kollur temple. These practices are the product of local traditions. In many temples, this arati is known as the Deevatige Arati and in others, as Deevatige Salaam. Attributing the arati at the Kollur temple solely to Tipu Sultan is a distortion of facts.

In addition, as the news report itself admits, no written historical records exist to prove that this practice owes its origin to Tipu. However, this is not to say that Tipu did not visit the temple town. Further, the periodicity of Tipu mentioned in the Vijaya Karnataka report is itself mischievous. The Vijaya Karnataka report puts the time of his visit between 1765—1795, a span of thirty years, but does not mention at least the approximate year in which he visited Kollur! This is important because if Tipu had visited it in 1765, he would have been a mere boy of 15 years old during which period he was undergoing his education. Further, even if he did visit Kollur, it was unlikely that he would have the power to have an aarati named after him given the domineering personality of his father, Hyder Ali who was the absolute monarch. Now, if we assume 1795 as the year of his visit, this was the period when he was still smarting under the severe humiliation that he had suffered at the hands of the British during the Third Anglo-Mysore war of 1792. However, although we can reasonably accept 1795 as the date of his visit, no evidence, which records this event, exists.

We encounter similar mischief in the other assertions that Tipu did not destroy temples in the coastal and Mysore regions and his grand offerings to a few temples. This supposed benevolence of Tipu has to be viewed through a larger prism. There is a huge volume of evidence that conclusively shows that Tipu showed no regard for the feelings of the Hindus in his dominions apart from these two. His several wanton campaigns of aggression in Coorg, the Malabar, Mangalore, and Coimbatore—to name a few—left in their wake a bloody trail of mass destruction of Hindu temples, forced conversions, massacres, torture, and forced conversions of Hindus and Christians. Definitive accounts of this horrid campaign are available in scholarly historical works like H.D. Sharma’s Real Tipu and I.M. Muthanna’s Tipu Sultan X-rayed.

Given this, it is quite evident that Tipu did not destroy temples in and around Mysore because he could not afford to. It was simply realpolitik that made him refrain from this act—he could not antagonize the majority Hindus in his own backyard and risk rebellion.

While the letter correspondence between Tipu and the Sringeri pontiff is true, it cannot be construed as evidence to prove Tipu’s love for the Hindu religion. Tipu’s largesse to Sringeri was borne out of his hatred for the Marathas – who had raided Sringeri. More significantly, the Vijaya Karnataka report misses out the crucial historical context in which Tipu granted the largesse. It was made some time in 1792-93, the same period that the British, the Marathas, and the Nizam crushed him in battle and obliterated his pride. In the run up to the Third Anglo-Mysore war, the Marathas had also raided Sringeri and looted it. This was thus the perfect opportunity for Tipu to curry the favour of the Sringeri Mutt by posing as the protector of Hinduism. It was politics, not religious tolerance that lay behind Tipu’s gifts to Sringeri.

It is clear from the aforementioned accounts that Tipu’s fanatical hatred for non-Muslims far outweighs his so-called love and tolerance for Hindus.

Therefore, this attempt by Vijaya Karnataka to attribute a local Hindu ritual to Tipu Sultan and to uphold it as testimony to Tipu’s love towards Hindus is not merely a product of ignorance of local cultures—it is also a mischievous attempt at distorting history. It adds more fuel to the renewed project of glorifying Tipu as a patriot and national hero on false grounds, and is therefore False.