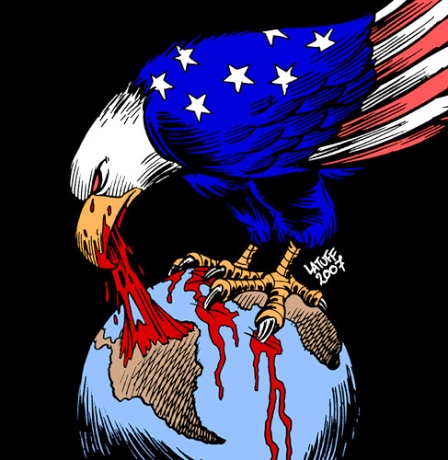 The US emerged as the pre-eminent country once the USSR retreated dramatically in the early 1990s. It clearly became the pre-eminent military power in a unipolar world, with a supposed Chinese challenge remaining an issue for the future. The media and Western academia, unfailing accessories to the policies and public relations disinformation of their own governments, eagerly promoted the idea of a new era of peace and a huge peace dividend.  In the end, figures show that the US peace dividend was modest.

Like virtually every empire before it, from Greece, Rome, the Ottomans and the British, the US sought to press home the advantage of its victory over the USSR and the Warsaw Pact. It had assured the Russian leadership that it would not extend its military alliance frontier towards Russia, but failed to keep the solemn commitment. It quickly moved into Poland, eager as ever to join any anti-Russian conspiracy, allowing US anti-ballistic missiles to be positioned in its territory. The US then engaged in a scheme to ensnare Georgia, the Ukraine and Central Asia, to hem in Russia. Worst of all, it virtually sponsored the Chechen Islamist revolt in order to seize the important oil pipeline network in Chechnya that had been created during the USSR era. It is striking that the US views Islamist terror as entirely an instrument of mundane policy, nurtured and used when necessary and abandoned in an instant, however temporarily, if inimical to current goals.

Eventually, Russia under Putin responded to frustrate the US attempt to encircle it with a network of freshly-minted, US allies. It invaded Georgia and intervened in the Ukraine, using their geographical proximity and economic dependence on it, especially for fuel, to its advantage. It also intervened in Central Asia to ensure governments friendly towards it remained in power. The Chechen revolt, financed by the ever-devious Saudis, with more than a walk-on logistical part for Pakistan, was crushed militarily, but the Chechen genie continues to impose a high cost on Russia. But Russia is accustomed to major casualties and has usually come out ahead in every major war in the past four centuries and more.

US imperial ambition was then unleashed against Middle East dictatorships, first Saddam Hussein, easily entrapped by encouragement from a US ambassador to invade Kuwait. Ultimately, Saddam Hussein was unceremoniously done away with and the ambassador concerned died mysteriously. The Saddam Hussein experiment, though still unfinished and leading to massive and unending blood letting, did not stop the US from overthrowing Colonel Gaddafi. He was brutally murdered, to shocking whoops of joy from US Secretary of State, Hilary Clinton, when viewing a film clip of the appalling execution, with a knife inserted into his rear, in a US-style cavity intrusion. The US has since managed to remove President Morsi of Egypt and is organising the long term disablement of the Muslim Brotherhood he represents, by the use of brute force. The experiment of crushing unwelcome foes viciously was tested successfully in the 1990s, through the collaborationist military regime of Algeria, in which over 300,000 died. The Syrian adventure still unfolds although President Assad’s downfall has only been delayed by Russian involvement.

The US has experienced some political setbacks in Latin America, with many leaders asserting their autonomy from US tutelage in the first flush of spreading democracy, long denied them by the US. But the US has not ignored their temerity and attempts to overthrow or undermine the unduly loud-mouthed continue, but it has accorded priority to spectacular action elsewhere in the world. Its Latin American difficulties are essentially amenable to political intervention and subversion although old style, re-militarization through proxies remains an option. Very little softening of US policy towards Cuba, despite the end of any imagined communist threat to the US, is noticeable. It has evidently been ruled out by the usually belligerent US military and political establishment and Cuban exiles, known for their implacable hatred towards the dispensation at the home they fled.

The Indian subcontinent remains a critical stage for contemporary US geopolitics because of its troubled but historically-rooted alliance with Pakistan and the potential for using India against China in Asia. Contrary to the forlorn delusion of many in India, propagated by its local assets, Pakistan cannot be easily abandoned by the US. The US may be deeply disliked by most ordinary Pakistanis, but it has never been bothered by domestic opinion in third world countries, which it contemptuously disregards. It is the relationship with ruling elites and the ability to make them submit to its wishes that matters. And, despite all the staged dramas of Pakistani politicians, for the benefit of their own public, there is little they will not do for their Washington overlords. The use of drones, which kill many civilians, continues routinely and Pakistanis have even provided levies, through the Laskhar Toiba, for action in Syria.

India has always been a source of much consternation in Washington, with Jawaharlal Nehru refusing to accede to US wishes to join its Cold War alliance against the USSR. His daughter, Indira Gandhi, took things even further, perhaps too far, by brazenly flouting firm US injunctions and playing midwife in the birth of Bangladesh. She is likely to have paid for it with her life, which was preceded by a manufactured political crisis through some US assets in India. India paid for it in the Punjab as well although it was facilitated by shocking lapses of political judgement, originating with senior Punjab Congress politicians. It enduring difficulties in the J&K also have an acute international dimension although mother and son, Rajiv Gandhi, helped it along by overriding the democratic verdict in the state.

The US agenda in India is still unfolding. Foolishly granted enhanced access to India by the NDA, the country subsequently became the victim of a veritable UPA sell-out to the US. The US is very much in the saddle, but it seems to feel its manipulative sway needs to be secured more firmly. The back of the counterpart of the horse, India’s political society and bureaucracy, remains to be fully broken. This is how the departing British imperialists wanted to leave India, broken-backed, riven with religious division and betrothed a fractious medley of truculent princely states, having to look to London in order to govern as a consequence. The importance of India is geopolitical because it will be one of two major checks on China’s ambitions in Asia and beyond. The other country is Japan, which remains dependent on the US nuclear umbrella for security and its recent changes in defence posture are clearly occurring with US approval.

The US may have been somewhat hasty celebrating its decisive clout in India, but the penetration it seems to be achieving is a portent of India’s abysmal fate, re-born as another Egypt. The Devyani Khobragade episode is merely an illustration of the US taking for granted its ability to subdue Indians casually. In India itself, the US has already managed to unleash political forces it was nurturing quietly and a totally suborned mainstream media is carrying out its wishes, by trying to ensure their successful intervention in the general elections. The goal is to thwart Narendra Modi, the last remaining major politician championing Indian independence, becoming prime minister. In this context, the NRI influence and the role of a supposedly educated and relatively affluent urban voter are proving to be a deadly phenomenon. They are americanised in identity and in aspiration of putative life style and quite beyond redemption politically.

The US needs India to assume the role of dependable proxy, which will sacrifice prodigious quantities of manpower in a conflict, should push come to shove. It was the role of Indian soldiery as a British colony and evolving US military doctrine suggests that its own endeavours will depend significantly on sea and air power. It is increasingly reluctant to sacrifice manpower on land, with the domestic sensitivities involved and newer military technologies, like precision guided missiles and drones, have created the possibility of minimising it. The shape of things to come for India is visible in Nepal.

A ramshackle and corrupt monarchy was overthrown, with India’s acquiescence dictated personally by its supreme national decision–maker. It was deceptively easy for the US to manipulate an admittedly home grown revolt, under the guise of Maoism, with church organisations advocating the human rights of murderous, senior Christian cadre. The pace of religious conversion in Nepal is rapid and its reconstitution as a Christian enclave, like the Nagaland and Mizoram, the goal. Nepali converts are also being advised to lie to census takers and identify themselves as Hindu. In India itself, heightened religious conversion is being concealed by the refusal to reveal census data, by diktat from the leader of the UPA. It is likely that Christians already comprise between 8-10% of India’s population, not quite the Republic of Korea, but on the path to becoming a constituency that will, in conjunction with Muslims, wield a decisive veto over the Indian polity.

Nepal is important to US strategy because, like the Ukraine, which borders Russia, it offers the most favourable land access to China, via occupied Tibet. Tibet itself remains a hotbed of discontent and offers huge potential for causing China serious headaches. The US perceived the Nepali monarchy, professing purportedly ‘archaic’ religious loyalties, as an unnecessary layer of authority, with which it no longer needed to negotiate and an impediment to Christianising the country. US troops had joined reconnoitring missions in Nepal during the alleged Maoist rebellion and politicians received a US$5 million bribe to remove the word’ Hindu’ from the new constitution, which they promptly did. India belongs to this larger geopolitical scheme of things in US competition with China, providing cannon fodder and like Nepal, facilitating land access in any difficulty with China.