Towards a Vocabulary and an Aesthetic of Nationalism- I 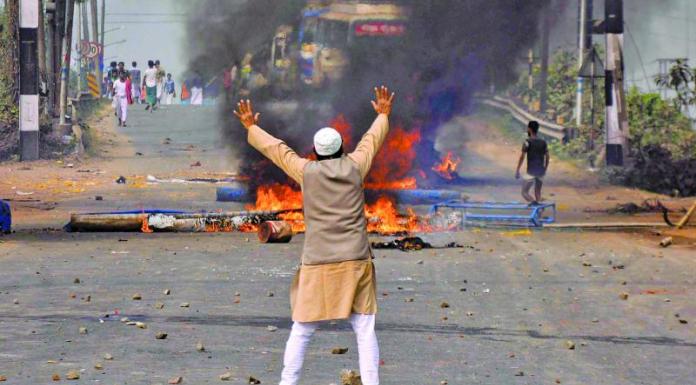 In the wake of the Anti-CAA riots across the country, the renewed mischievous “azadi” sloganeering on the streets, and radical leftist hooliganism in the name of dissent in our university campuses, it has become necessary to take a hard look at the nationalist discourse in this country, with an aim to make that discourse more robust and immune to deconstructivist attack. The following exercise ensues from that necessity.

If we are to have any hope for the survival of nationalism as a worthwhile pursuit, then we must have with us a way to talk about it in as clear terms as possible. In this context, the word ‘clear’ calls for further clarification. At this very moment, a fierce battle rages on in the public spheres of India and beyond, whose outcome will determine the fate of nationalism as a movement and also that of those who love this country. Clarity of thought, which often gets reflected in the clarity of one’s speech, is going to be an invaluable asset for those patriotic individuals and institutions who are engaged in this battle. How would they attain more clarity of thought and speech? For one thing, the nationalists cannot rely on sentimentality, banality and polemics alone. That would make them vulnerable to all possible forms of attack and lead their cause to be easily deconstructed by the postmodernists, the vanguards of the Modern Left-Abrahamic Religious Imperialist alliance (henceforth ‘MLARI alliance’).

Having said that, we must also point out that the main impetus of the arguments arising from the nationalist side of this debate will predominantly proceed from a centre of the emotional faculty, tucked somewhere deep in the multi-layered entity we call the human person. But merely the fact that this is so should not be a ground for weakness; for that centre is the same wherefrom love emanates, it being in this particular case the love of country. Such love makes one more grounded than others (who do not share the same love); and it renders them eminently capable of withstanding hardship, suffering and injustice – making them expand their heart in a manner that they may transcend the selfish interests of their conditioned existence and recognize themselves as part of something bigger than their own little selves. It gives them something invaluable: a membership to a larger community, and a deep sense of belonging to the same. We must not miss the point that this sense of belonging is also organic, in the sense that it rises from within the individual who has felt, in their own heart, a certain kind and a certain amount of gratitude towards the land, its past dwellers and their legacy – in short, towards its spirit which is made up of each of these aforementioned elements and more.

It is this spirit that is the object of worship of the nationalists – of this there should be no confusion. Indeed, it is idolatry, a kind of divine inspiration that animates every thought issued from the patriot’s heart, animates her every utterance that is the manifestation of such thought, and her every action that is the final outcome of such utterance. A patriot has to muster the courage to wear this idolatry as her badge of honour. She must not be apologetic about it; i.e. whenever she decides to speak up about her worship of the spirit of her land, she should speak in terms of the fundamentals of this act rather than only negating its critiques. This will ensure a direct engagement with what nationalism is, rather than what it is not. The more we compel our opponents to engage with the former, the less we feed into the monstrosity that they have made of nationalism.

This object of worship, the spirit of the land, is dynamic – not because it is subject to change as a function of time, but in the sense that it betrays temporality by ever renewing itself. Time itself has a tendency to, as it were, get renewed – for it is said that history repeats itself and indeed in our very own Indic view of things the movement of time is understood to be cyclical rather than linear – but the dynamism of this spirit of the land, this Geist des Landes, transcends any mechanical circularity of the temporal conception. On the contrary, it is a living thing. This dynamism gets embodied in the extraordinary individuals who rise just when that spirit seems to be at its weakest level, in every age, amidst every crisis of catastrophic proportion. And then the avatar (we are consciously calling it as such, for it is so uncannily parallel with the Hindu idea of avatāra-vāda) of the age rejuvenates the spirit. Nobody knows why this happens, nobody quite knows how to explain this phenomenon – that of the spontaneous creation of a lineage of patriots – but there it is all the same: as irrefutable as any empirical fact can be.

To return to the question of nationalist arguments and their best possible articulation and defense, we have established that they essentially flow from the instincts of love and gratitude. Thus the problem at hand is: how do we, as patriots, articulate such tender – and deeply personal – instincts through our arguments in a manner that will compel those on the other side, as well as those sitting on the fence, if not altogether convince them? From our experience and (for some of us) our exposure to literature and art, we have seen that the best articulation of these feelings have usually come from the quarter of poets and artists. Indeed, the best patriots of our country across time have often been poets par excellence themselves – Guru Gobind Singh, Rishi Bankim Chandra Chattopadhyay, Swami Vivekananda, Ramprasad Bismil, Subramanya Bharathi, Sarojini Naidu, Veer Savarkar, Sri Aurobindo – the list of patriot poets or poet patriots is quite long. These figures have been men and women of action – but they were equally deft and persuasive with their words. Their poetic works, novels, plays and speeches have moved countless others, across generations, to taking positive action and set them on the path of the nationalist movement.

As it is, it may appear that in order to appeal to people’s hearts with enough nationalistic fervour, poetry can be utilised as an effective medium; and therefore, we may be inclined to believe that it is poetry that can point in the direction of an effective language of nationalism, if not itself become that language. But then the rasa theory (which can be described as the crux of alaṁkāraśāstra – the traditional Indian science of aesthetics) has convincingly shown us that in order to achieve a desired effect by invoking a certain feeling, through poetry/art, in the listener’s mind, it is necessary for the listener to have prior exposure to that specific feeling or its seed-desire. How can such individuals as are averse to the idea of loving one’s country, either due to ideological indoctrination or due to non-exposure to the specific signifiers that invoke love of country in one’s heart, be expected to be moved by poetry steeped in love of country? It certainly defies the logic of alaṁkāraśāstra.

This means that we must think even beyond poetry put together an effective vocabulary of nationalism in order to hold a meaningful dialogue around it. The late British philosopher Sir Roger Scruton had pointed out that conservatism is an instinct rather than an idea; and since talking about one’s instinctive feelings is difficult, it become difficult to talk about conservatism in a manner that may have a direct appeal to people. Nationalism, being one of the component elements of conservatism, is in equal parts a matter of emotion and a matter of common sense. That it is a matter of common sense, and subject to the rigorous application of logic, is already demonstrated by the applicability of the rasa theory on solving the problem of articulating nationalism. And what are instincts, if not a sum of the basic emotions and that thing which we call common sense? In any case, it turns out that nationalism is one of those subjects which are difficult to articulate; which makes it all the more difficult to defend it. On the other hand, the language of destruction, even though it too arises chiefly from the faculty of emotion, is rather readily available; as is demonstrated by the extremely artful use of language by the MLARI alliance. Their slogans, calling for denunciation of Hinduism, Indian nationalism, and the icons of both, spring from a spontaneous well of hatred, resentment and such other destructive sentiments. All one needs to do to understand this point is recall the fanatic cries of “tukde tukde” and “azadi”. Perhaps the language-processing cognitive faculty of our brain has more direct access to the negative instincts compared to the positive ones? Perhaps it is so because the instinct to preserve and cherish the things of value are embedded deeper in our psyche – much deeper than the instinct to destroy – and as a result the language-processing cognitive faculty has to make harder efforts to give it concrete shape in the form of words?

Indian nationalism is a matter of emotional bonding insofar as we value the ways of our ancestors and the legacy they have left for us. It also a matter of emotion in that refined emotion has the capacity to push through the apparently unbreakable ceilings of the mundane and help the human spirit attain ever higher as well as purer levels of consciousness. In this regard, Indian nationalism can be, and in fact has attained the same status as bhakti and bhakti yoga. Our opponents’ attempt to use the word ‘bhakt’/‘bhakta’ in a pejorative light does unwittingly admit the validity of this claim to a certain degree. Then, Indian nationalism becomes a matter of common sense in that it facilitates our survival as a distinct people endowed with tremendous experience of existing on this planet, and a resultant intelligence characterised by a mature, sophisticated attitude toward the human realm and the natural realm that ensures the sustainability of both these worlds. In fact, the values which constitute and foreground Indian nationalism are such that they do not make any inherent distinction between the human world on one hand and the natural world on the other. When seen through the filters of these constituent values of Indian nationalism, viz. the principles of the Vedic Sanātana Dharma, the cosmos is but one organic whole which manifests itself in different forms to serve different practical purposes.

What is the basis of Indian nationalism? To attempt an answer to that question, we must ask ourselves a few others: What is India? How is India a nation? Who can lay their claim on this nationality? Is it at all possible to come up with a definitive vocabulary for the use of the nationalists, to address these queries in the most fundamental terms, without merely attempting to ward off the criticism and the critics of nationalism? These and some other issues will be discussed in the next part of this series.

Sreejit Datta is an educator, researcher and social commentator on subjects critical to rediscovering and rekindling Indic consciousness in a postmodern, neoliberal world. He is a fellow of the Rajeev Circle Scholars (RCS) Program ). Sreejit is a poet, translator, and a trained musician. Blogs: https://medium.com/@SreejitDatta | http://chadpur.blogspot.in/

Towards a Vocabulary and an Aesthetic of Nationalism- II

Sri Aurobindo and India’s Rebirth- A book by Michel Danino