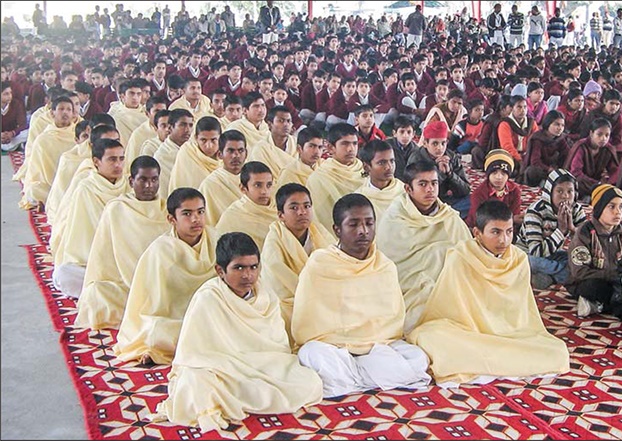 When one studies any topic in the world, there exist two distinct entities – the one who is studying (Study-er) and the studied (Object of study) The topic being studied may be a language or a branch of pure science/technology, or a more abstract science, such as psychology or a scriptural text. The more the Study-er is able separate himself from the subject being studied, the more ‘objective’ he is said to be, and therefore, the more accurate his understanding and evaluation of the topic. This is how we are taught to be ‘scientific’ in our thinking, and examine all phenomena with this type of ‘objectivity’.

What happens when the topic of study is not something in the World of Objects, but the very nature of the subject, the Study-er? Would it be possible for the one doing the study to maintain this type of ‘objectivity’ when the topic under study is NOT an object of the universe? Would one engaged in study with this kind of objectivity be able to understand the nature of the subject, the Self? Would this Subject-Object distinction be an advantage or would it hamper the study?

There are many who claim that Hinduism[1]  is a way of life, not a religion. The meaning of this statement, however, needs to be understood correctly.

According to the vision of Vedanta, there is only one goal of human life – to get rid of this life! Every human being – be he an Eskimo or a bushman from Kalahari, or from anywhere in between — is burdened with the irreconcilable feeling “In this life, I am limited” This is what impels every human being to continue to act, in an attempt to rid oneself of this felt sense of limitation, a sense of incompleteness.

The Hindu vision is that the only way to get rid of this sense of limitation (and consequent actions that result in one being a samsari) is if, in reality, one IS limitless, purnah. This truth is covered over, and in its place a false identity is projected. The result — one takes himself to be limited. Therefore, freeing one from this sense of incompleteness is essentially one of uncovering the truth and discovering the nature of the self, called moksha.

Ancient Hindus created everything to help humans prepare oneself for this discovery. Language, social divisions by one’s nature of work, learning, placing a well-considered, but limited value on worldly achievements, structured progression in life, institutions such as marriage were all designed to allow everyone to move towards this goal. They created a society where competition did not distract one from the real goal, where growth opportunities were within one’s own field of work; where one could attain a state of maturity that allowed little or no conflict within. Even when an individual did not have clarity about the human goal, the lifestyle allowed him to prepare himself through following the prescribed path and using elders and the learned to allay any doubts along the way.

Every learning process, every study, every research was viewed from the perspective of this human goal of life, even if it was not so obvious to the person concerned. One is in reality searching for the nature of the Self in any study, just as every human being is seeking moksha in every desire, every goal and in every action towards that goal, even without realising it.

“In truth, Indians always regarded life as a manifestation of the self and the master idea that governed life, culture and social ideals of India has been the seeking of man for his inner self; everything was organised around this single goal” says Francois Gautier, in his book, History of India as it happened.

The western mind, not having been exposed to the universal human goal of moksha, tends to examine everything with the myopic vision of the world as they see it. The goals are all limited to what is in the universe or, at best, an unverifiable something that one somehow hopes to attain. Among these there are many, who become respected scholars of ancient texts and languages. They produce works of great erudition, analysing many issues of knowledge and classifying them in different ways. They also propound path breaking hypothesis and theories, but fail to appreciate the Vision and moksha as the purpose of life. To that extent their works remain incomplete. Swami Chinmayananda points out that the difference between the Hindu perspective of any study and that of the others is the difference between wisdom and knowledge.

Such a perspective is not only because one is born in the Western world and has always been taught to look at the world with the senses of the observer observing the observed. Modern science tells us that the observer of a phenomenon influences the very phenomenon itself. How then can different observers and analysts of the same phenomenon maintain that they are being ‘objective’ in their studies and assert that the observations each has made and the conclusions each has drawn from these observations are the ‘truth’?

India has had the Western system of education thrust upon it by invaders (One may be generous and assume that they thought it was the better way to learn and live life. History, however, suggests that at least some of it was done deliberately to eradicate the well- established culture and learning methods of India). Later, many Indians warmly embraced that system of education and accepted the teaching to the detriment of the history and culture of India, and lost value for the Hindu perspective. In the words of Francois Gautier “In a gist, they will be the ones, who are always looking at the west for approval and forever perceive India through the western prism”

Many educated Indians today have been strongly influenced by the western education system that is prevalent even now in India (or have studied in the west) and have lost much of the significance of the ancient system. Most of them swear by the superiority of the ‘knowledge’ acquired through their education, without ever having learnt or understood the vision of the Hindus. Rajiv Malhotra, the noted Indologist says such people exhibit an intellect that is still not freed from colonisation.

This difference between the two perspectives becomes even starker when one studies shruti texts, the Vedas. Sri Aurobindo elaborates on this: “The problem is that the translations (of the upanisads) do not render the beauty of the original text, because these masterpieces have been misunderstood by foreign translators, who only strive to bring out the intellectual meaning without grasping the soul contents of it and do not perceive the ecstasy of the seer ‘seeing’ his experiences”

To the Hindu way of thinking, everything is either preparation for the understanding of the nature of the self, or the actual learning about it.  All human endeavours are nothing but an unending search for the absolute truth (of the Self, of the Universe and of Isvara, God) Vedanta points out that the truth of all three is the same, call it Atma, Brhaman, Pranava or Om. Swami Dayananda Saraswati of Arsha Vidya Gurukula, one of the great masters, says “The very searching denies the sought because the searcher himself is the sought” It is with this recognition that the Indian mind, confident of the depth of the culture and understanding of its rishis (seers), perceives all knowledge.

Logic, analysis and inferences can be used to negate all that cannot possibly be the absolute truth everyone is seeking. Traditional Hindu teaching encourages questioning and debate, with the right attitude. Bhagawan Krishna says in the Bhagawad Gita[2] that one should approach a guru, who has understood reality with the right attitude, with a questioning mind, and with a bhava of seva. The gnani (or Jnani), the one who has understood, will teach you. The questioning mind can be maintained till the point one figures out what the reality is not, removes all doubts and negates the various errors. After that, to arrive at the truth of the self, one has to have shraddha[3] and follow the traditional methods of teaching and learning.

The idea is not to belittle the works of many Western (including Indian-Western) scholars. There is a significant place and role for these. However, one should read, understand and make use of such studies, but be extremely careful when it comes to dealing with subjects such as Indian culture and history and the understanding of the Hindu texts like upanisads.

[1]The word Hinduism is being used to represent a variety of groups with some commonalities – those who worship certain common pantheon of Gods, those who allow everyone total freedom to choose who or what they will worship (or not worship), those who accept the Vedas as a valid means of knowledge, those who celebrate certain common festivals, observe some common rituals such as marriages etc., or those who look up to puranas and itihasas (Ramayana and Mahabharata) as source books on how to conduct one’s life. (This is despite the variations in different parts of this large country) This will also include the large diaspora across the world.

[3] “Faith” is the closest English translation, but it’s many connotations do not convey the correct meaning of the word “shraddha”

Swami Ganeshaswarupananda started questioning the reality of life and the world very early in life. He went through what many people do-- get a good education (IIT, Delhi,Iran Centre for Management Studies, Tehran), tasted material success, went through a phase of being known and recognised, travelled the world and observed people, customs and human interrelationships. However, fundamental questions about life and its reality kept surfacing repeatedly. He spent three and a half years living with and learning from his guru, Poojya Swami Dayananda Saraswati at a gurukulam in Anaikatti in Southern India. He now lives a life of study and teaching.