Trupti returns ‘atrupt’ from Haji Ali, but who will fight for you? 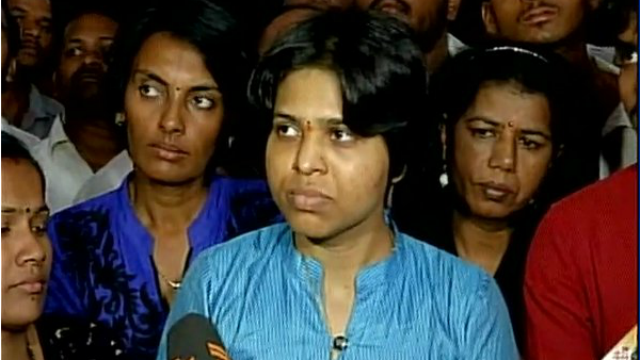 All of us know about a certain Trupti Desai. The woman who was hailed domestically and internationally as the torch bearer of the fight for gender equality. She was mainly in the news due to the recent Shani Shingnapur temple entry episode where the court allowed the entry of women in the Sanctum Santorum of the temple, which was banned for over 400 years.

There was a lot of noise about how it was regressive of Hinduism to prohibit the entry of women into temples, with even the court saying: “There is no law that prevents entry of women in any place. If you allow men then you should allow women also. If a male can go and pray before the deity then why not women? It is the state government’s duty to protect the rights of women.”

Liberals, seculars, feminists, humanists, and all kinds of intellectuals hailed their hero Trupti for breaking in to the tradition of Shani Shingapur irrespective of the fact that the traditions are highly codified and have a reason behind their existence. These traditions are not some superstitions that says one must not cross the road that has been crossed by a cat. There is difference between a superstition and a centuries old tradition.

Every properly consecrated temple, especially the ancient ones, have several dimensions to its existence. It is not like the neighbourhood temple erected overnight in the parks of Delhi colonies in order to grab government land. The old temples were erected with proper architectural logic where the place, the quality of stones, and the shape and size of the structure were all weighed upon. The aura of a temple affects personalities and even metabolic activities. That’s the reason why certain temples belong to only a group of people, certain to one gender, certain to just a cause and certain to the whole community.

Anyway, Trupti Desai had her way given the fact that Hindus are liberal in nature and they don’t go bombing when their traditions are disturbed. I won’t mince words, but we have seen what other religions have done, when their icons- ‘laws’ were touched.

Trupti Desai, fresh from her ‘win’ and riding the wave of intellectual support for bringing ‘equality to Hinduism’ and breaking the shackles of ‘illogical’ tradition, traded her sights on the Haji Ali Dargah in Mumbai.

Haji Ali Dargah does not allow women into its Sanctum Santorum as well. Obviously, the entry to a place of worship should not be restricted by ‘religion’, and what the court had said with respect to Shani Shingapur temple could be, at least logically, extended to all religions and all places of worship.

Trupti’s struggle, we were told, was not about religion, but about women ‘wanting to pray’ at all the places of worship, more so at those where the entry was banned.

However, that did not happen in Haji Ali Dargah. Trupti had to back down from her mission this time, which in Shani temple case she had tried to land inside the shrine from a helicopter. One would have expected her to get support in this ordeal from the very same intelligentsia that had supported her earlier.

But, No. The support evaporated and it became a propaganda now. She had to back down as soon as the secularists started propagating that she was a BJP/RSS member trying to disturb the peace of a community by making them angry. Basically, she had no right to talk about Muslim Dargah.

These agents of social corrosion and their vicious narrative of anything anti-Hindu being progressive has started to become as apparent as dirt at the bottom of clean water. The left-liberal intellectual lobby is getting skinned by their own convenient silence.

The issue is not about who should talk about the rights of women, especially of Muslim women. The issue is today, Trupti Desai has lost her credibility and the hypocrisy of several others, who suddenly found that the issue of entry of women into religious places is not a women’s issue, but rather of a ‘peaceful’ community, stands exposed.

Trupti surely would not have got any support here, given the fact that Haji Ali has ‘haji’ and ‘ali’ in it. Anything with Islamic words is not to be touched, because it suddenly becomes an attack on a ‘peaceful minority’.

It is interesting to note that the ban on women’s entry at Haji Ali is only a few years old, whereas in Shani Shingapur, the restrictions have been in place for many centuries. Yet, any protest against such a ban is considered ‘an attack on minority religion’ in the case of former and is hailed as ‘getting rid of regressive and unscientific traditions’ in the case of latter.

This duality of pseudo-feminists becomes apparent whenever there is an Islamic word in the headline. When they see Haji Ali, it suddenly becomes ‘it’s their subject to deal with’. However, when the word is Mandir, at the place of Dargah, it becomes an international issue ridiculing the whole religion, ‘Ah! What a pity, Hindus don’t allow women in temples.’

Not a single voice came in her support when she backed out. My question is, if Muslim women want to progress, shouldn’t they grab these moments? Shouldn’t they initiate a process where they can get a platform, the first stepping stone?

Women were never allowed their space anywhere in recent centuries. They have fought to move up in every place, every time, every situation. It is their fight and they will have to see it through.

Who else will fight for the triple talaq, if not Muslim women? Who else will defeat the nonsensical polygamy, if not them! Who else will attack the maulvis, who dictate reading science and maths as being satanic?

And please don’t tell that only Hindu women have issues, I would stop believing my sensory organs!

Author is an avid blogger who prefers to write on social and political issues. He is the author of best selling Hindi ‘bachelor satire’ Bakar Puran. He has just delivered his latest Hindi novel named 'Ghar Wapasi'. Follow him on Twitter @ajeetbharti