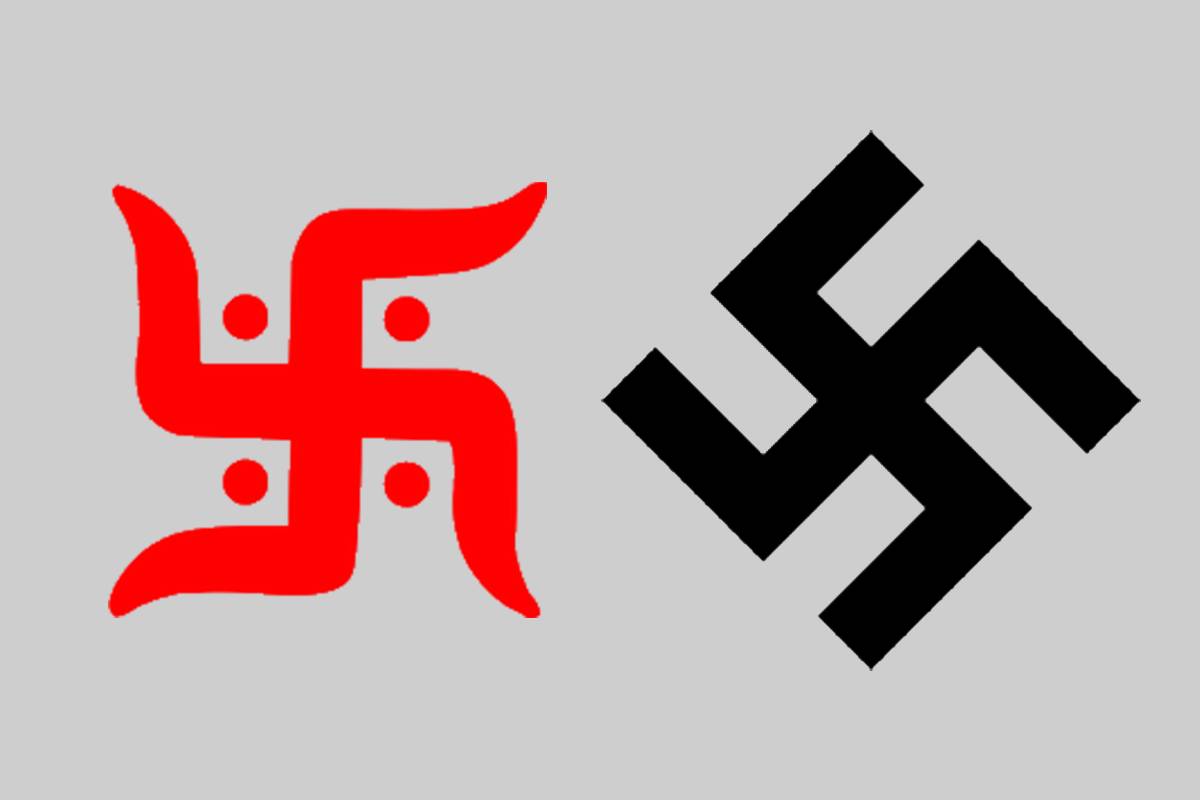 Last year, a bill was introduced in the New York Senate to mandate compulsory education in all schools to the “meanings of swastika,” a symbol of ‘hate.’ Swastika was bundled with a noose, “a symbol of racism and intimidation’’ in the bill. The bill attempts to bind the “meaning of the swastika as the emblem of Nazi Germany.’’ Many legislative acts in the West are already in place, which though well-intentioned, link swastika to terrors of Nazism, and bind its meaning to horror and thus ban it. There is no let-up in this association. Last month, Finland’s air Force quietly dropped their 102 years old emblem that featured Swastika. In public imagination too, the swastika has, in a way, become onomatopoeic with the horrors of Nazism. In this article, I will examine how come the symbol came to be associated with Nazism, and whether the use of the word Swastika is appropriate to designate a symbol that was, in the first place, called as Hakenkreuz by no less than Hitler himself.

The earliest known use of the word “svastika” or “swastika” is found in the 6th century BC Sanskrit philologist Panini’s Ashtadhyayi. Considered as the great grandfather of linguistics, Panini used swastika to illustrate a particular sound of letter a. The fact that it was used to explain a certain grammar rule more than 2500 years ago, demonstrates that the symbol was well assimilated and widely known and used in Ancient India. In Indian sub-continent, it can be located from pre-Harappan times to the date. The use of the svastika symbol however predates its name and was not limited to the Indian subcontinent alone. It has been found from Scandivania to Africa, Paraguay to America. The earliest known symbol appears on Palaeolithic carvings on mammoth ivory from Ukraine, dated circa 12,000 BC.

Of all symbols, Indian Swastika is the most adopted, most adapted and most pleasing to eye.  Swastika is easy to draw, can be moulded in many other shapes with artistic creativity and is exquisitely graceful. It is a sign of good fortune, peace, prosperity, benediction and blessing, and all thoughts and deeds noble-­-a sign of Arya (meaning noble). Maybe, a symbolic representation of the Rigveda’s Aano bhadra krtavo yantu vishwatah (meaning: Let noble thoughts come to me from all directions). Swastika can also be viewed as a combination of male (Shiva) and female principles (Shakti) glued into one. In the Ramayana, the ships that Guha arranges had the insignia of Swastika onto them, and so did modern-day India’s oldest shipping company, The Scindia Steam Navigation Company. It is auspicious for other Indic religions too. The absence of sun from the recognised symbols of 24 tirthankaras has led to assumption that the swastika symbol of 7th tirthankar actually denotes sun. In Buddhism, the swastika is considered to symbolize the auspicious footprints of the Buddha. Ornamental and secular representation of Swastika are equally common in India. The third most populous state of India, Bihar, has two swastikas on its emblem along with the name of the state in Urdu which is often seen as a language of Muslims. A number of Swastikas have been found in sites of Indus Valley Civilization, the most extensive of ancient civilizations of the world as well as on the oldest coinage of India.

Swastika (स्वस्तिक) literally means ‘let there be good’ (su “good” and asti  “let it be”), or simply ‘good it is’ implying total surrender to Paramatma and acceptance of the fruits of karma. In one sense, it is also equivalent to ‘amen.’ With various meanings, Swastika is still more than the sum of all its meanings. Swastika can be interpreted in many ways but can itself not be defined or fully decoded, rendering it an enthralling sign.

In the West, it was known as fylfot or Gammadion before the name swastika became popular. Rational nomenclature demanded that a name with a history of thousands of years be assigned to the symbol. Various recognised similar symbols with varying significance were termed as swastika.  And thus many forms of crosses including dreaded hakencreuz came to be known as swastika. Max Muller protested against the word Swastika being applied generally to a variety of similar symbols as it was a word of Indian origin with a definite meaning in India.

18th century Europe witnessed a growing fascination towards Sanskrit, Indic cultures and anything Indian. Voltaire, for instance, was convinced that everything that is important for civilization like astronomy, astrology, metempsychosis, etc. had originated from the banks of the Ganges. Friedrich Schlegel’s book On the Language and Wisdom of the Indians firmly accredited to India the origin of European languages and indeed civilizations. Common English words like dental, ginger, candy, zen, man, mind, rice, mandarin, son, daughter, father, mother, brother, and their other equivalents in other European languages came to be seen as having derived from Sanskrit or a proto-Sanskrit language. It led to Indo-Aryanism and a belief in the superiority of the Aryan race. The words Arya or Aryan come from the Vedas and Avesta scriptures to designate Indo-Aryan people. Arya itself means a noble one. The old name of India is Aryavart and gives rise to name Iran. Amidst all Indophilia and Swastik mania, many other countries and institutions started adopting the symbol. From a laundry company to a shipping company; from a national air force to a war committee, swastika was ubiquitous much before Hitler was even born.

One school however posited that Indo-Aryan was more properly a racial identity, not a linguistic one, which originated in ancient Germany or Scandavania. This thought of school was very popular in Germany and gained quite academic respectability after the defeat of Germany in World War I. The centrality of India in Indo-European discourse gave way to the centrality of Europe and more particularly, German. In this narrative, North European “Aryans” had migrated across the world and founded all major civilizations, but eventually lost their purity and potency through racial mixing (miscegenation) with non-Aryans. Brahmins of India too were a sub-group of these Aryans who invaded and destroyed Indus Valley Civilization before dominating local Dravidians by conquests.

Amidst all this theorizing, an archaeologist named Heinrich Schliemann had chanced upon the ancient fabled city of Troy, mentioned in Homer’s Greek classic Iliad, at Hissarlik. Large-scale destruction and treasures left behind there had a parallel theme with Vedic battles of the Aryas. Significantly, around 1800 symbols similar to swastika were found on excavated objects there. Theory met evidence. The ubiquitous and immemorial Swastika was now both a proof and sign of a superior Aryan race; it is simple yet je ne sais quoi design, of the race’s superiority. Soon, these symbols “swastikas” became the symbol of a German-Aryan identity. The swastika became the symbol par excellence of the Aryan, or in anthropological terms, the White Race. The narrative had pro-Christianity and anti-Semitic elements as well. Emile Burnouf, the key person responsible for the adoption of Swastika as an Aryan symbol, claimed that Christianity derived from Aryan pantheism while Judaism, a monotheistic religion, was the religion of a lesser race. Jesus Christ, an Aryan, was crucified on Swastika in fact.

Hitler’s ascent to power took the belief in racial supremacism to a new level. Hakenkreuz, the symbol par excellence of superiority of the German master race was pushed still further to symbolize German nationalistic pride. Hakenkreuz was a black “Hooked Cross” rotated 45 degrees on a white circle on a red background. This insignia was everywhere–on the party’s flag, badge, armband. Hitler himself finalized this insignia. In his own words, in the Hakenkreuz lay the mission of the struggle for the victory of the Aryan man. Aryanisation, or say Nazification of an Indic symbol was complete. The deracinated symbol was now an Aryan symbol to assert Aryan (anti-Semitic) racial superiority and to suppress perceived non-Aryan people.

To cut a long story short, Swastika which began life as an auspicious symbol in Indic religions, found itself associated with various other similar non-Indic symbols consequent to  Schliemann’s discovery of the lost city of Troy in 1871. Subsequently, Swastika became an Aryan symbol when Aryan had already become a racial category. German nationalists believed it was a uniquely Aryan-German symbol ignoring any archaeological or contemporary evidence.

Amidst all clamor of Aryo-German superiority, there were a few saner voices but were generally sidelined amidst the chauvinistic cacophony. Norman Brown, Professor of Sanskrit at the University of Pennsylvania, declaimed in his pamphlet, The Swastika, a Study of Nazi Claims of its Aryan Origin,

The present Nazi claims are untenable. Just as their theory of Aryan racial purity is fanciful, so, too, their use of the swastika as an Aryo-Christian symbol, with aspects of anti-Judaism, anti-pacifism and anti-Marxism, is entirely arbitrary.

Deracination and misusing of an otherwise auspicious and ornamental symbol has caused affront to more than 1.70 billion people adhering to Indic religions like Hinduism, Buddhism and Jainism. In the popular imagination of the contemporary West, the image of Swastika evokes the horrors of Nazism. Anti-Nazism is at fault too by perpetuating this misplaced and pre-conceived notion by constantly linking the symbol with Nazism. It is time to remember the warning of Max Muller so as to bring to an end this mindless association:

I do not like the use of the word Svastika outside India. It is a word of Indian origin and has its history and definite meaning in India. I know the temptation is great to transfer names, with which we are familiar, to similar objects which come before us in the course of our researches. But it is a temptation which the true student ought to resist, except, it may be, for the sake of illustration. The mischief arising from the promiscuous use of technical terms is very great.

What will a beggar do if he happens to get a car? He will use it for begging, of course, goes an Indian joke. Similarly, what could a hate monger like Hitler do or could have done with a ubiquitous and exquisitely graceful symbol that was open to interpretations? The answer is self-evident. He made it a symbol of hate. And anti-Nazis and many other well-intentioned individuals are perpetuating this notion. Both Nazis and anti-Nazis are intent on not taking Nazism out of the symbol. The symbol in the Western world today is arguably the most hated one. It is easier to hate than to understand. Ask Nazis!

Germany has been de-nazified but when will the symbol be? When will the symbol be contextualized back into the history of tradition with the right connotations? Why bind swastika symbol with a single, monochromatic interpretation when it has been termed as the ‘symbol with the most varied interpretations’ (Goblet D’Alveiella) and why to make its evocation appear simplistic when Max Muller termed it as a ‘troublesome puzzle’? Why not call a spade a spade? Hitler himself used the term Hakenkreuz for that dreaded symbol of hate which happened to have similarity with swastika. Why does Google Translation translate hakenkreuz as swastika in German-English translation, and vice versa? The theory of Aryan invasion and a common homeland of Aryans is long discredited; however, the association lingers on. It is time not to move on.