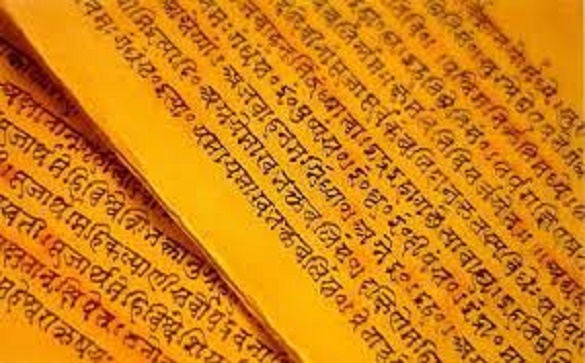 Have you noticed that Modi’s speeches are sprinkled with many phrases that are not in Hindi, like “Ahimsa Paramo DharmaH”?  Most of these are in “Samskritam”, or “Sanskrit” in Anglicized form.  What do these quotes mean?

During my years working in the USA, I could not but notice the pride children had in their country, and the amount of knowledge they had about their country’s past.  Later, I had the opportunity to study the curriculum taught in the schools.  The connection became very apparent.

Every child was taught about the sacrifices made by its “founding fathers” beginning with Christopher Columbus’ voyages and Discovery of the New World.  Likewise the sacrifices and leadership of the presidents such as Thomas Jefferson’s writing of the Declaration of Independence, George Washington as the Commander of the Armed forces during the Revolutionary War and as the first President of the United States, Abraham Lincoln’s leadership in the abolishment of slavery are the primary lessons in schools. The enshrinement of Liberty as a fundamental value of America and the founding of one of the greatest nations in the world is etched in the minds of children.

The US Currency Bill

The founders were proud Christians and the country was made possible by the blessings of (Christian) God.  USA is a secular country built on Christian Principles[1].  Hence the motto “In God we Trust” in every Dollar currency note, referring to their devotion to their Christian God.

The curriculum in High Schools includes a section on world religions with a healthy dose of Christianity.  The end result – every child grows up a patriotic citizen with a healthy sense of self-identity and rootedness.

It was the seventies, when I schooled in India.  By the time I was ready to go to college, I had come to learn that the British taught us how to speak, the Greek taught us reason and philosophy, and from Arabia and Islam came mathematics and architecture.

I was not taught that the country had a hoary past going back several thousand years, I had not heard the word Upanishad and its metaphysics that scientists haven’t been able to refute.  Not much was said about the great sacrifices made by icons like Subhash Chandra Bose and Veer Savarkar.  There was little or no mention of Kittur Chinnamma, Veerapandiya Kattabomman and Subrahmanya Bharati.  Countless monuments such as the famous UN Heritage site Brihadeeshwara temple in Thanjavur remain unexplored or even unknown.  I had no idea that our Urukku steel became popular in Europe as Wootz Steel used in the Damascus sword, or metallurgical wonders like smelting of Zinc or copper prevalent in India.  I wasn’t taught that the Indian share of the World economy plummeted from 24% in 1750 to 1.7% in 1900 as a result of systematic plunder by the British.  Instead, I was made to believe that it was the British, who taught us language and civilization, and made the country of “India” for people, who were otherwise backward and disorganized.

Net result: I learned the British view of a concocted India, rather than an organic view of India’s traditions.  Today, while there are encouraging signs of hunger in the minds of young Indians, the situation has not changed significantly. Hence, it is reasonable to assume that many Indians may find Modi’s “Sanskrit” quotes to sound like “Greek and Latin”.   The purpose of this article is to unfold the meaning of those quotes.  In order to achieve this end, some background education is necessary.

The word “Sanskrit” is the Anglicized form of the word “samskrtam” (संस्कृतम्).  The etymological definition of the word is “samyak kriyate सम्यक् क्रियते” or “(that which is) well done”’.  This is further interpreted as “a language which developed organically with the ability to express the subtlest of concepts (of the Dharma worldview) very well”.  This language is also called “devabhaaShaa देवभाषा” or “the language of the Gods”.

A 1650 copy of the “Peacock and Snake” problem of Bhaskara II’s Lilavati written circa 1200. (Picture Credit: Mathematical Association of America)

The itihaasaas Ramayana and Mahabharata, the Vedas, which includes the Upanishads, the puraanaas like Bhaagavatam and Maarkandeya, the elaborate commentaries on the Upanishads, commentaries on those commentaries, Arthashastra, treatises on sciences like Ayurveda, Yoga, Mathematics, and Jyotisham (astronomy), to name a few, are all written in Sanskrit.  In short, anything of significance to India’s past is in the language of Sanskrit.  Forget Sanskrit and be a flotsam in India.

The Vedas talk about human aspirations and categorizes them into Artha – the pursuit of security, Kama – pursuit of pleasures, Dharma – aligning our pursuits to common sense ethics and religious principles with a deep sense of self-responsibility, and finally Moksha, or Liberation.  The Upanishads primarily deal with the subject matter of Moksha.  Different traditions define Moksha differently.  Reaching a specific God at a specific location at the end of one’s life is one view of Moksha.  A view that is simultaneously most intellectually challenging and seemingly cognizable is that of Advaita, which claims that “You are what you are seeking”, or, “The essential nature of the individual, the nature of Ishwara (the Omniscient), and the nature of the Universe are identical”.

The meaning of the word “Upanishad” is derived as follows:

Upa (उप) – Near, in proximity (for example, the eyeglasses are called upanetram, upa – near, netram – eyes, i.e. that which is near the eyes).  Here “Near” refers to “that which is nearest to me”, which is the “Self” itself, referred to the first person singular “I”.

Sad (सद्) – the removal or destruction (of ignorance)

A Palm-Leaf-like rendition of the Isha Upanishad.

Therefore, Upanishad means “well ascertained removal of (the ignorance) of the Self.  I.e. The knowledge of Self.  Because the pursuit of the Knowledge of the Self is in the realm of enquiry and devoid of beliefs, this subject has challenged and enamored the greatest thinkers of the world.

PuraaNaas (पुराणः) are accounts that portray the glories of Ishwara[2] (ईश्वरः) and of men of high learning, valor, and righteousness. For example, the account of Harishchandra is dealt with in one of the PuraaNas, wherein he is portrayed as one who will never speak a lie, regardless of circumstances.

His truthfulness forces him to undergo hardship such as having to leave his wife and child.  As children, we used to be in awe listening to our grandmother narrate these stories day after day.  Such stories in the PuraaNaas set up challenging ideals and values for the individual.  The PuraaNaas are eighteen in number, the most famous of which is the Bhaagavata PuraaNa, which portrays the glories of Sri Krishna.

Ramayana and Mahabhaarata are the two itihaasaas (इतिहासः) of the Sanaatana Dharma.  This word itihaasa is often translated as “mythology”, i.e. a study of myths.  And “Mythology” is a glorious word for “fiction”. But, if you look at the etymology, it means:  “Iti ha aasa इति ह आस” thus indeed it was, implying the presentation of historical events, not as a historian would, but a poet would.  The itihaasaas have been passed on from one generation to another for an unknown number of millennia.  It is considered sacred.  Indians, therefore, believe that Rama and his brothers existed, as also Krishna, Arjuna and his brothers and the extended family.  Ramayana is a poem, the first and the longest poem written by any human being – at only 24,000 verses!  Hence, Valmiki is called aadikavi, आदिकविः, or “first poet”, and Ramayana called “mahaakaavyam”, or “first/grand poem”. Ask any Hindu, if Ramayana is a “myth” and they will be shocked, yet they have been conditioned to use the word “mythology”, an erroneous translation of the word itihaasa.  Ramayana is a part and parcel of the history of India.

With this background, in the succeeding parts of this narrative, I will explain some seminal phrases that Narendra Modi often quotes, which reveal the vision of India’s sages.  Some of these are: