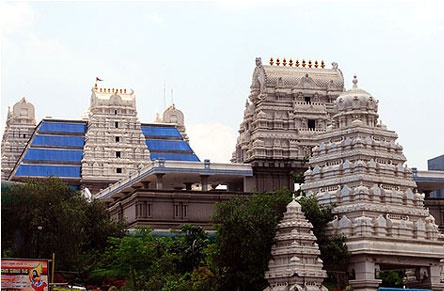 “There are as many as 2,07,000 temples in Karnataka and the total income of these temples amounts to Rs 72 crore. Only a sum of Rs. 6 crore is being spent by the Government for their upkeep. On the other hand, the Government spent a phenomenal amount of Rs.50 crore for the madrasas and Rs.10 crore for the churches.”

That was when S. M. Krishna of Congress was the chief minister of Karnataka. In the last 13 years, while the income from the temples has doubled, and the amount spent towards madrasas and Churches has also doubled, the amount spent on the upkeep of the temples has remained the same. During these 13 years, Janata Dal (S) and the BJP were in power between 2006 and 2013 and the Congress is in power since then, but the condition of temples continues to remain pitiful.

Here are some key-facts from a 2003 article by Anjali Patel, which are dated but still relevant today:

The issue here is not just about the government misusing the funds collected from the temples, or taxpayers’ money being spent on subsidizing religious travel of a particular community, the issue is much beyond that.

But, let us first understand the difference between Hindu temples and the places of worship belonging to other religions.

According to Dr. Subramanian Swamy, as he explains very clearly in this video, the temples are the places of inhabitance of our Gods, and not simply a place to offer prayers. The construction of a temple and the subsequent installation of the idol involves processes called ‘Prana-Pratishtapana’, by which the very presence of Gods are established within the premises of the temples and thus, the temples become the abode of the Gods. On the other hand, a mosque or a church, is simply a place to offer namaz or prayers, respectively, and they have no conception of these places as being the very abode of God.

Most Hindu temples have a rich story to tell and during ancient times they were also utilized as places of learning. But, today, it is disheartening to see, how temples have transformed from being places of learning to being commercial complexes, from which government is pocketing crores of rupees as income every year. The ground situation for adherents of Hinduism has become critical over the last seven decades, mainly due to political interference and politics of discrimination and appeasement. Though, India got independence in 1947, and the constitution guarantees Right to Religion, it appears that the implementation has catered to the needs of all communities, except the Hindus. This is especially troubling, since India is a Hindu-majority nation.

The successive governments and political masters, need to answer, why this discrimination against Hindus? Why should government control Hindu temples, while churches and mosques are given a free hand? Why is the government spending, tax-payers’ money towards churches and masjids, while diverting most of the money collected from temples into non-temple, non-Hindu activities?

If only the Hindu community is given back the control of the temples and their activities, then the money collected from the temples could be utilized for so many community oriented, religious, cultural, and educational activities.

Prior to 1925, the Sikh Gurdwaras were in control of Udasi mahants, who were largely perceived as corrupt and degenerate from the mainline Sikhs. The Sikhs fought hard and forced the British to pass a law, which brought the administration of Gurdwaras under the control of an elected body of the Sikh people. That law is the “Sikh Gurdwaras Act 1925″. That law has worked exceptionally well and has satisfied the Sikhs’ desire of being in control of their Gurdwaras and overseeing them as per the group’s mandate. This is one of the best examples that Hindus can emulate.

Hindu temples are not the sacred places that they should be, because, they are not under the control of Hindu community. The income from most of the Hindu Temples, the offerings by the devotees, etc. goes to the government treasury and become government revenue and hence, the Hindu community has no say as to how the temple money is utilized.

The government takeover of temples has resulted in several state governments running full-length ministries for the management of various activities of those temples. The erstwhile Andhra Pradesh government, for instance, employed 77,000 people to ensure ‘smooth conducting of pujas’ in its 33,000 temples. Similar numbers could be found in Tamil Nadu, Karnataka, and Kerala. Ministries for management of temples are present in some north Indian temples as well. This is one of the immense incongruities of Indian secularism is that a vocally non-religious government sees no contradiction in overseeing Hindu sanctuaries, and just Hindu temples.

Such systematized oppression and discrimination against the majority community, which constitute around 80% of the population of the country, is without parallel on the entire planet. Some Hindu sampradayas, for example, the Ramakrishna Math and Mission have even attempted to claim “minority” status so as to preserve their institutions from government interference. This continuing grip of the government over administration of Hindu sanctuaries is not only an infringement of the religious rights of the Hindus, but has also resulted in massive corruption and abuse of assets. Add to this, the government’s apathy and utter disregard towards the sacredness and sanctity of the temples.Add to this, the utter disregard and contempt shown towards the sacredness and sanctity of the temples.

In 1980s, the then Kerala chief minister K Karunakaran had ordered the Guruvayur Temple to transfer 10 crore rupees from its bank account to the state treasury to offset financial deficit. Whether the amount was ever returned or not is doubtful. What’s more, the temple’s property was reduced from 13000 acres of land to a meagre 230 acres of land by the Land Reforms Act, which helpfully avoided non-Hindu foundations. In 2004, the Mahrashtra government admitted to diverting US$ 190,000 from Mumbai’s Siddhivinayak temple to a charity run by a politician, in the Bombay High Court. In Tamil Nadu, the HR and CE Department controls more than 4.7 lakh acres of land of horticultural area, 2.6 crore square feet of structures and 29 crore square feet of urban place that is known for temples. The earning from these properties must be at least few thousand crore rupees, yet the government collects a meagre Rs 36 crore in rent. This is a classic case of corruption and underhanded dealings.

Politically influential people have shamelessly appropriated temple property for individual use. A friend of mine narrates how a representative from the Tamil Nadu HR&CE department would arrive at one of the small temples in the state to collect the money deposited in the temple “Hundi” and would pocket a part of it for his personal use. Petty corruption, underhanded dealings, and misuse of temple assets are rampant in the government administration of the temples.

Ayodhya, Will a temple be built there ever?

Ayodhya is among the most sacred places for Hindus across the country. According to Hindu Itihasa (history) texts, Lord Rama was born, brought up, and ruled from Ayodhya. But, for the last many decades ‘Ram Janmabhumi’ has been in the middle of political dispute. The dispute traces its origin to the destruction of the Hindu temple in Ayodhya and construction of a mosque in its place during the reign of Babar of Moghul dynasty in the 16th century. The recent excavations in the area have also confirmed the presence of a Hindu temple beneath the demolished Babri mosque. Yet, a new temple for Lord Ram is yet to see the light. Though, BJP leader Subramanian Swamy has expressed a certainty that such a temple will be built soon, it remains to be seen how much of his assertion will materialize on the ground.

It is high time that Hindus realize that their government is discriminating against them in the name of secularism. Income from Hindu temples should be spent on those very temples and on activities that enrich Hindu community and propagate Hindu religion. For this, it is vital that temples are freed from government control and are instead managed by the community. Hopefully, the Supreme Court, which is scheduled to hear today, the petition of late Swami Dayananda Saraswati to free temples from government control, will be able to address these genuine concerns of the Hindu community.