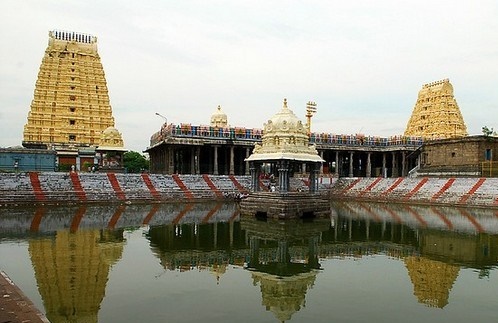 Namma Devasthana had organized a workshop on “Temple Governance” on July 2, 2016 at IIM-Bangalore. The hearing of Poojya Swami Dayanand Saraswati’s petition in the Supreme Court for the autonomy of Hindu temples is due on July 13, and the timing of this workshop was intended to bring public attention to this issue. In the event the autonomy became feasible through SC intervention, then we need to come up with a framework or ecosystem to manage our temples. Professor Gopinath, IISc and Kiran Bettadapur, Lawyer in HC, Karnataka have drafted a framework for managing the temple ecosystem. While preparing the draft, the Namma Devasthana team had also consulted several Mathas, temples and organizations fighting for the autonomy of temples.

Prior to the workshop, the draft was circulated amongst the participants of the workshop. The participants included people associated with administration of Mathas and Temples, renowned scholars and concerned Hindu activists. The purpose of organizing the workshop was to come up with a governing model for the temple ecosystem and at the same time validate and improve upon the framework proposed by Kiran Bettadapur and Professor Gopinath. Namma Devasthana’s objective was to come up with a model framework that puts a stop to bureaucratic interference, protects the assets of the temples, arrests aesthetic, financial, spiritual & demographic despoliation happening in the community, and finally facilitates good societal outcomes.

Professor K Gopinath introduced the proposed draft to the audience. He mentioned that any model used for governance should take into account the following factors:

He also stressed that the current system of administration, with bureaucratic/political interference, was a direct result of hotchpotch of the case law that did not take “Indic insight’ into account.

The Proposed model divides the administration of temples into three spheres namely:

Professor Gopinath mentioned that these three spheres are already manifest to some degree in most of the temples. He cited examples of small temples, where Adhidaivika predominates; of Ashrams, where Aadhyathmika sphere predominates; and of large temple institutions with attached paathashalas (traditional schools) and complex traditions and forms of worship, where all the three spheres are equally important. He further elaborated, how VIP Darshan culture could be done away with in the Adhidaivika sphere and how world-class management practices could be adopted in the Adhibhautika sphere. He said that each sphere should have a core set of ideas, which can have several possible expressions based on time and context. He also stressed the importance of doing a frequent SWOT (Strength, Weaknesses, Opportunities and Threats) analysis, with respect to each sphere, so as to further strengthen the positives and effectively counter the threats. He gave the example of how a SWOT analysis of Aadhyathmika sphere will help one deal with threats of “digestion”. Similarly, SWOT analysis of Adhibhautika and Adhidaivika spheres will help in checking corruption and promoting innovative forms of worship, respectively.

Shri Kiran Bettadapur spoke second, with his presentation emphasizing the need to map the temple governance model to the legal realities of the constitution (or if need be to make amends to the constitution to accommodate the Indic perspective). He pointed out seven key questions, to which a consensus needs to be arrived at:

Kiran opined that without being clarity regarding the above questions, it would be futile to draft a bill and take it to the legislators.  Inimical forces will look to exploit fault-lines within the society to put down any “draft bill” that we may work on or finalize. Hence, to build a broad consensus, we must have clarity on the questions posed. Any ambiguity would lead to unfavorable interpretations and cause confusion, which defeats the very purpose of having a robust model of governance.

The workshop had a section titled “Voices from the ground”. Several speakers from diverse background spoke in this session. Some of the highlights of the session are as follows:

Shri Rathnakumar from Sode Matha warned that if the administration of any temple is corrupt, then such a place is likely to indulge in the exploitation of the devotees, and thus resulting in the reduction of that temple from being a center of devotion to being a center of commerce. He also stressed upon the need for designing a Temple Administration course and informed that his Matha would support such an initiative.

Shri Bhargava Narsimhan pointed out that on the one hand, many Hindus are working towards uniting the whole community; but, on the other hand, several sects are fighting amongst themselves over a wide range of issues, including temple administration. He also stressed the need for inculcating Kshatra spirit among all Hindus, in order to protect Dharma from inimical forces. He said that without the Dharma, no Sampradaaya will remain.

Shri Murali S Kakolu mentioned that even basic amenities like good drinking water are not available in many temples. He stressed that having provisions for basic amenities are important even to attract devotees. He also said that in order for a temple to thrive as a hub of culture and devotion, there should be local participation and temple managements should take initiative steps in this regard.

Shri Robert Rosario, a socio-political activist from Mangaluru, belonging to the Christian community, was invited to the workshop in order to understand the strengths and weaknesses of the Christian administration model. He mentioned that the Bishop or the padres were all appointed by the Vatican, that there was a lack of democratic spirit in these appointments and that the community were at the mercy of the appointed officials. He said that the Bishop had all the three powers of Legislative, Executive and Judiciary, which would make him all powerful in the whole system. He also said that these appointments are done by a foreign organization and the Indian government treated them as representatives of the Christian community, whereas genuine voices are often ignored.  He also insisted that there was a need to regulate the affairs of the Church, so that no anti-national activities takes place.

Shri Ramapriyan from Swamy V Narayan Gurukulam spoke about the corruption of the Archakas in some of the prominent temples.  At that juncture, Sandeep Balakrishna intervened and pointed out how there were instances of heritage temples being run by Archaka(s), who received a pittance as a salary from the Government.

Shri Nagarajan from Temple Worshipper’s society, Chennai spoke about the response of the Tamil Nadu Government to the petition in the Supreme Court. According to Nagarajan, the TN government in its response stated: “Monarchs of the yore always controlled and they constantly interfered in management of temples”. He mentioned that his own research has revealed otherwise. He cited the instance of a temple in Tiruvattaluru where a monarch named Kampavarman made several endowments to the temple and each endowment was entrusted to a village sabha. The entire administration of the temples was handed over to a village sabha called Manini Sabha. Later on, when the ruler changed, the administration continued to remain in the hands of the same village sabha.

Shri Muralidharan Chilukoor from the Chilukoor Balaji Temple drew upon the experiences of his family, which had fought hard to prevent the takeover of the Chilukoor Balaji temple by the state government. He said that the Government is not a setup that promotes devotion and though, once in while an honest officer may come, that is definitely not the norm. He stated that many temples have become cinema halls after coming under government control. He also referred to presence of separate queues for different classes in some temples. He warned that if the government continues to perceive administration of temples as an economic activity, then before long may low-income temples may end up being shut. He strongly appealed against any such closing down of temples by the governments and urged them to instead put in place a system that balances both the high-income and low income temples. He stressed that it was the duty of the present generation to gift our rich heritage and temple tradition in a better condition to our future generations.

Namma Devasthana believes that there is a definite need to free temples from Government control to stop the spiritual decadence and financial corruption at various levels. At the same time, an open, transparent and effective mechanism to administer temples must also be developed, so that the entire society is benefited.

The author is a software professional and is part of Namma Devasthana, an advocacy group working towards the objective of Autonomy to Hindu temples.