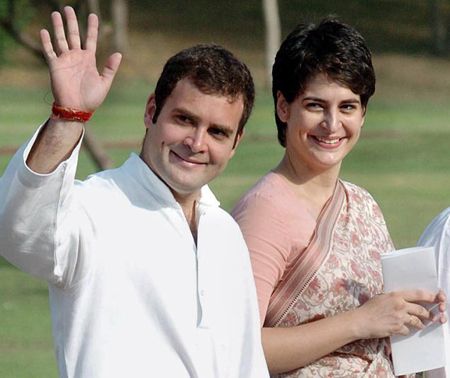 Political observers know that there are 4 groups in Congress viz. Sonia Gandhi, Rahul Gandhi, Priyanka Vadra and Manmohan Singh group. Over past 6 months, Manmohan Group melted away and aligned itself to other three.

Priyanka Vadra group not only, like everyone, knows that Rahul Gandhi is low on intellectual side but also accepts it and hence wants to promote Mrs Vadra, which is reflected in Mrs Vadra’s appearance, which has been crafted to look like Indira Gandhi. But the point missed by the group is that in the age of social media it is not possible to hide what one wears and looks like in Lutyens‘ Delhi, in USA and in Amethi.

The fight is not new between the siblings. In September 2013, in a major embarrassment for Prime Minister Manmohan Singh and his cabinet colleagues, Congress vice-president Rahul Gandhi publicly castigate the UPA government for issuing an ordinance to negate the Supreme  Court order on disqualifying convicted MPs and MLAs, terming it as “complete nonsense” that should be “torn and thrown out”.

Rahul’s theatrics, broadcast live by TV news channels, not only seriously undermined the position of the Prime Minister (nothing new in UPA regime) but delivered a blow to the image of Congress president Sonia Gandhi, who was a part of the Congress core group which cleared the ordinance proposal. Rahul’s move, Congress strategists said, was to distance himself from the UPA government’s perceived omissions and commissions and go to the electorate with a clean image.

But in this theatrics something else was being conveyed. During that time, Mrs Vadra led group was running a TV campaign in which a lady named ‘Priya'(nka) comes and solves all the problems of everyone using one or the other government schemes. (http://www.youtube.com/watch?v=HkLPz9xlh8I). Rahul Gandhi led group in Congress was upset because they could see the Mrs Vadra’s long term plan. The ‘ordinance’ gave the perfect opportunity to bring ‘Yuvraj’ back on the centre stage. And it worked. The series of ‘Priya'(nka) advertisements stopped almost with immediate effect.

After that Mrs Vadra was out of sight, but announcement of Smriti Irani’s candidature against Rahul Gandhi gave her a perfect platform. She appeared in Amethi as a saviour of Rahul Gandhi. A move not at all appreciated by Rahul Gandhi group. As they say, the proof is in eating the cake; the current jibs on Modi by Mrs Vadra to defend Robert Vadra is not backed by Rahul Gandhi led group. Digvijay Singh, Jayram Ramesh known Rahul loyalists are not to be seen in TV channels nowadays. Not even the so called youth group of Congress, Murli Deora, JyotiradityaScindia, Sachin Pilot to name a few are out to defend Mr Vadra. And the cherry on the cake, Rahul Gandhi himself has not spoken a word till now to defend Jijajai!!!!!!!

Infact the infighting in Congress has reached a stage that either second grade leaders of Congress or Muslim leaders in Congress like Ahmed Patel, Salman Khurshid, Rashid Alvi, are defending congress. Likes of Kapil Sibbal, Chidambaram make ones a week appearance on television when the election fever is at its peak.

Kumar Vishwas, an RSS sympathiser has by now exposed Rahul Gandhi in his constituency completely. Smriti Irani’s better record in parliament, backed with Modi wave, makes her a formidable opponent. To top it, Mrs Vadra’s presence in Amethi, is not only reminding voters of the corruption model of the Gandhi-Vadra family but also the standard of Mrs Vadra’s retaliatory remarks will be convincing voters about the truth behind the corrupt ‘Vadra Model’.

The last word is yet to be spoken, the last scene is yet to be enacted in the ‘Varda Vs Gandhi’ battle but like always Narendra Modi is having the last laugh.