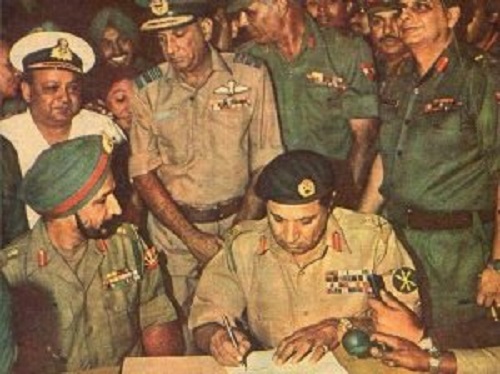 Every year on 11 November, we often see headlines speaking of Armistice Day which marks the ‘armistice’ signed between the Allies of World War I and Germany at Compiègne, France, for the cessation of hostilities on the Western Front, where Germany was the defeated party.

A similar case is also seen in the annual D-Day celebrations which mark the turning point in World War 2, where again the victors were the Allies and Germany was the vanquished one. Then why would Germany hold a joint First World War ceremony with their one time enemy France? In the words of French President Francois Hollande:

France and Germany, beyond suffering and grief, had the audacity to reconcile…

Can we say the same about our situation with neighbor Pakistan? If that was the case, we would see the Pakistan establishment join India today for Vijay Diwas. But that is not the case. But before going further, we need to remember how this day of victory was reached:

The 1971 conflict was sparked by the Bangladesh Liberation war, a conflict between the traditionally dominant administrators of the then West Pakistan and the East Pakistanis. The conflict intensified after the 1970 Pakistan’s General elections, where the popular  political party of East Pakistan, the Awami League won 167 of 169 seats in East Pakistan securing a simple majority in the 313-seat lower house of the Majlis-e-Shoora (Parliament of Pakistan).

Sheikh Mujibur Rahman, the head of Awami League claimed the right to form the government. But Zulfikar Ali Bhutto of Pakistan People’s Party refused to give the premiership of Pakistan to Mujibur, and on his advice the then President Yahya Khan called the military, dominated by West Pakistanis, to suppress the Awami League.

Many attempts were made to neutralize East Pakistani soldiers and police. After several days of strikes and protests by the East Pakistani activists and supporters of Awami League, the Pakistani military cracked down on Dhaka on the night of 25 March 1971. The Awami League was banned with many members taking refuge in India. Mujib was arrested on the night of 26 March 1971 around 1:30 am (as per Radio Pakistan’s news on 29 March 1971) and taken to West Pakistan. The arrest was preceded by Operation Searchlight, a military operation which killed the intellectuals and activists in Dhaka.

On 26 March 1971, Ziaur Rahman, a major in the Pakistani army, declared the independence of East Pakistan as Bangladesh reflecting on an earlier speech made by Mujibur Rahman on 7 March.    At that moment the exiled Awami League leaders formed a government-in-exile in Baidyanathtala of Meherpur, a small district bordering West Bengal. The East Pakistan Rifles, a paramilitary force, defected to the rebellion. The Bangladesh Force or the Mukti Bahini consisting of Niyomito Bahini (Regular Force) and Gono Bahini (Guerilla Force) was formed under the Commander-in-Chief (C-in-C) General Mohammad Ataul Ghani Osmany.

Meanwhile the brutality of the Pakistani army caused approximately ten million people to take refuge in the neighboring Indian states. As a result the East Pakistan-India border was opened to allow refugees safe shelter in India where the administrations of West Bengal, Bihar, Assam, Meghalaya and Tripura established refugee camps along the border. But the wave of impecunious East Pakistani refugees placed an unbearable strain on India’s already overtaxed economy.

Seeing the plight of the refugees as well as the zeal of the Awami League leaders, on 27 March 1971 the Indian leadership under Prime Minister Indira Gandhi expressed full support for the independence struggle of the people of East Pakistan. Mrs Gandhi also stated that it was more effective to end the genocide of Bengalis by taking armed action against Pakistan than to simply give refuge to those who made it across to refugee camps. Exiled East Pakistan army officers got in touch with members of the Indian Armed Forces and Intelligence Agencies with plans to prepare these camps for recruitment and training of Mukti Bahini who were the guerilla fighters opposing the Pakistan Army.

The Military Government of Pakistan organised an anti-India propaganda campaign, with stickers proclaiming Crush India becoming a standard feature on the rear windows of vehicles in Islamabad and Lahore. Later these propaganda posters were accompanied by other stickers proclaimed Hang the Traitor in an apparent reference to Sheikh Mujibur Rahman.

Meanwhile India’s official military campaign in 1971 was delayed against the wishes of the Prime Minister. This famous incident is described by the then Chief of Indian Army Sam Manekshaw:

In 1971, when West Pakistan cracked down in East Pakistan, hundreds and thousands of refugees started pouring into India, into West Bengal, Assam and Tripura. The Prime Minister held a Cabinet meeting in her office. The External Affairs Minister Sardar Swaran Singh, the Agriculture Minister, Mr. Fakhruddin Ali Ahmad, the Defence Minister, Babu Jagjivan Ram and the Finance Minister, Yashwant Rao Chavan were present. I was then summoned.

A very angry, grim-faced Prime Minister read out the telegrams from the Chief Ministers of West Bengal, Assam and Tripura. She then turned around to me and said, “What are you doing about it?”And I said, “Nothing, it’s got nothing to do with me. You didn’t consult me when you allowed the BSF, the CRP and RAW to encourage the Pakistanis to revolt. Now that you are in trouble, you come to me. I have a long nose. I know what’s happening.”
I then asked her what she wanted me to do.She said, “I want you to enter Pakistan.”And I responded, “That means war!”She said, “I do not mind if it is war.” “Have you read the Bible?” I said. The Foreign Minister, Sardar Swaran Singh asked, “What has Bible got to do with this?” I explained, that the first book, the first chapter, the first words, the first sentence God said was, “Let there be light” and there was light. Now you say, “Let there be war” and there will be war, but are you prepared? I am certainly not. This is the end of April. The Himalayan passes are opening and there can be an attack from China if China gives us an ultimatum.
The Foreign Minister asked, “Will China give an ultimatum?” And I said, “You are the Foreign Minister, you tell me”. I told them that my armoured division and two of my infantry divisions were away. One in the Jhansi/Babina area, the other in Samba and the third one in Andhra Pradesh and Tamil Nadu. I mentioned that I will require all the road space, all the railway wagons, the entire railway system to move these formations to the operational areas and that harvesting was in progress in the Punjab and UP and they would not be able to move the harvest which would rot; and I pointed out to the Agriculture Minister that it wouldn’t be my responsibility if there was a famine.

Then I said, “My armoured division, which is my big striking force is supposed to have 189 tanks operational. I have got only 11 tanks that are fit to fight.”The Finance Minister, who is a friend of mine asked, “Sam why only 11?” So I told him, “Because you are the Finance Minister. I have been asking you for money for over a year and you say you haven’t got it!”

And finally I turned around to the Prime Minister and said that the rains were about to start in East Pakistan and when it rains there, it pours and when it pours, the whole countryside is flooded. The snows are melting, the rivers would become like oceans. If you stand on one bank, you can’t see the other. All my movement would be confined to roads. The Air Force, because of climatic conditions would not be able to support me. Now Prime Minister, give me your orders. The grim Prime Minister with her teeth clenched said, “The Cabinet will meet again at four o’clock”.
The members of the Cabinet started walking out. I being the junior most was the last to go and as I was leaving, she said, “Chief, will you stay back?” I turned around and said, “Prime Minister, before you open your mouth, may I send you my resignation on grounds of health, mental or physical?” She said, “Everything you told me is true”.
“Yes! It is my job to tell you the truth” I responded, “and it is my job to fight, it is my job to fight to win and I have to tell you the truth.” She smiled at me and said, “All right Sam, you know what I want?” I said, “Yes, I know what you want!”

In the meantime the Indian government continued to provide basic support to the refugees as well as the valiant Mukti Bahini. But then on 3 December 1971 the Pakistan Air Force (PAF) launched a pre-emptive strike on Indian Air Force bases in an attempt to replicate the Israeli Air Force’s successful Operation Focus during the 1967 Six-Day War.

In response to the attack, both India and Pakistan formally acknowledged the ‘existence of a state of war’ between the two countries. Three Indian corps was involved in the liberation of East Pakistan and were assisted by nearly three brigades of Mukti Bahini fighting alongside them, and many more fighting irregularly. The Allied forces of this war called the Mitra Bahini speedily bypassed the heavily defended strongholds of Pakistani forces rendering the latter incapable to defend Dhaka.

Finally on 16 December, Lt. Gen A. A. K. Niazi, Commanding Officer of the Pakistani forces located in East Pakistan signed the Instrument of Surrender. At the time of surrender only a few countries had provided diplomatic recognition to the new nation of Bangladesh. Over ninety-two thousand Pakistani troops surrendered to the Indian forces and Mukti Bahini, making it the largest surrender since World War II.

Which brings us to the initial point made in the beginning of the article; whereas the vanquished party of both World Wars-Germany accepts the crimes it committed—specifically the mindless manslaughter of the Jews in the Holocaust, many in the Pakistan establishment still view 1971 as a ‘Hindu Zionist’ plot to break Pakistan and refuse to acknowledge the killings of millions of Bengalis done by the Pakistani army.

This was clearly seen when last year the National Assembly of Pakistan adopted a resolution moved by Jamaat-e-Islami party on Monday expressing concern over the hanging of Bangladesh’s war crimes convict Abdul Quader Molla and demanded that the Bangladesh government should not resurrect issues of 1971 and end all cases against the Jamaat-e-Islami leadership of Bangladesh. Even the oh so charming chairman of the Pakistan Tehreek-e-Insaf Imran Khan claimed Molla was “innocent” and charges against him were false.

These views on Jamaat are still being fostered even after it was discovered that during 1971, Jamaat-e-Islami formed pro-Pakistan militias called the Al Badr who were involved in the killing of several Bengali intellectuals and activists. In many cases the Al Badr militants acted as informers for the Pakistan army, taking them to places where Hindu families and families of pro-Independence sympathizers resided, and encouraged the army-men to rape the female family members before brutally murdering them.

Be that however it maybe, today is a day for India to justly and proudly celebrate the Vijay Divas, which shattered the infamous two-nation theory into a three-nation reality—where our valiant soldiers played a major part in the birth of the third nation.