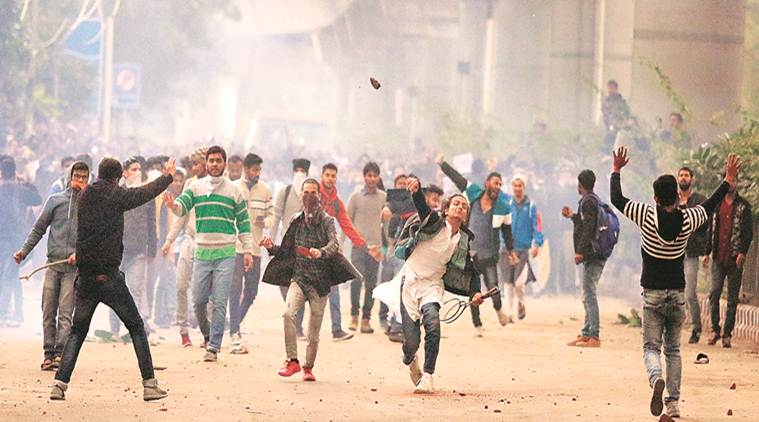 Anyone familiar with India’s political scene can easily discern that Pratap Bhanu Mehta has been ‘’creative’’ in his latest article on Modi.  The article is written against the backdrop of mayhem mainly in two universities in India: Jawaharlal Nehru University (JNU) and the Jamia Milia Islamia University (JMIU) both based in New Delhi. He ascribes three reasons for the situation. First, desire of the newly re-elected Modi government to cling to power for which it has to ‘’invent’’ new enemies. Second, violence as a weapon for control and third, Modi’s alleged project of destruction of all institutions. Are his allegations factual?

Why would Modi need ‘’new’’ enemies?

Mehta identifies main enemies to be the left and secular parties, ‘’Urban Naxals’’ and the minorities.

The left parties, CPIM and the CPI, together won only five out of 543 Parliamentary seats. The Indian National Congress (INC), and the regional parties (AITC and DMK) who describe themselves as liberal and secular, won 52, 24 and 22 seats respectively. Do they pose a political threat to Modi who won 303 seats? Furthermore, though Mehta uses the term ‘’enemies’’, Modi never used it. On the contrary, he emphasizes an important role opposition can play in a democracy.

“Urban Naxal’’ are “urban intellectuals, influencers or activists of importance” who under the guise of being the torchbearers of social issues ‘’radicalise urban youth to take up arms for the Naxalite cause’’. They are enemies of the State and were arrested when INC led coalition ruled. They are re-arrested for fresh offences and Court proceedings continue.

In India, “minorities’, is a euphemism for Muslims who constitute about 14% of India’s 1.32 billion population and influence outcome in over 200 Parliamentary seats. It is beyond reason, why Modi an ace statesman, would alienate them and risk his party’s electoral prospects? Modi took several steps to win them over from the opposition. The abolishing of instant divorce (triple talaq) greatly empowered Muslim women. Yet Mehta makes a sweeping generalisation that Modi considers minorities to be enemies without providing a shred of evidence and ignoring that Modi’s Ministry for Minorities is headed by a Muslim.

Mehta holds that normalising “tukde tukde gang’’ (break India to pieces) phrase is responsible for the violence. In February 2016, a group of LSUs held a rally in JNU, shouting slogans such as Bharat tere tukde honge Insha Allah (India will break to pieces Allah willing) and “Afzal hum sharminda hai tere katil jinda hai’’ (protesting against the death sentence for Parliament attack culprit Afzal by the Court during the INC regime). Media made the tukde tukade phrase enter in popular lingo. When Rahul Gandhi (then INC President) showed solidarity with the students, Modi accused the INC of siding with the gang. In turn, a senior INC leader accused Modi that he heads the real tukde tukde gang. Political parties do hurl such allegations. But Mehta whips Modi alone.

Next, Mehta accuses Modi for using “violence to foment more violence’’ and ‘’apply (ing) force and intimidation’’. But why would a democratically elected government use force unless circumstances warrant? What does Mehta expect government do if rioters throw patrol bombs on public buses and run for cover inside the JMIU campus? Should the police not enter the campus to nab them? The duplicity of people like Mehta is revealed when they object to police entry on JMIU campus without VC’s consent and yet question why police waited for VC’s permission in the JNU’s case.

Mehta’s accusation that Modi uses violence as a pretext for more violence and control is also untenable. The violence in Universities followed street-level violence that broke out in Delhi and several cities of Uttar Pradesh (UP) state during anti- Citizenship Amendment Act 2019 (CAA) protests by Muslims. Protesters set on fire buses and police stations, consequently the police opened fire. But Mehta appears to have no qualms for bus-burning rioters if they are Muslims. If passing of the CAA by both houses of Parliament triggered the protests, how does it make the State responsible for the violence? There will always be people unhappy with government decisions, but does that warrant violence?

By reference to Kashmir, Mehta further muddies the water. Before Modi removed Article 370 in August 2019, the Muslim majority state saw rioters pelting stones at Army vehicles with the toll of civilian and army personnel exceeding 42,000. Thereafter, however, not a single bullet has been fired or life lost.

Similarly, Mehta’s contention that Modi is destroying all institutions is untenable. He cites tweets from Modi ministers expressing shock over JNU violence and laments their helplessness. But tweets reflect anguish at the rot that has set in the JNU not a frustration directed at their own government. Mehta conveniently forgets JNU’s long history of leftist violence and the rot which is not of Modi’s making.

Mehta recommends absolute refusal to patronise the tukde tukde narrative. But he should have advised Rahul Gandhi, instead who supported the breaking-India forces. Why should Modi not use an opportunity handed on a platter by opposition leader?

Mehta’s comment that Modi’s strategy is not to solve old issues comes as a surprise when within six-months of re-election, Modi resolved age-old issues like triple talaq, Article 370, Ram Temple and now the CAA.

The anti-CAA protests are sponsored by the frustrated opposition which can’t take on Modi politically. The University violence was stage 2 of the three-stage drama. Stage 1 was played out on Delhi and UP streets. When the nabbed culprits were found to be Bangladeshi illegal immigrants, stage 2 commenced but protests remained confined to LSU dominated universities. When violence proved counter-productive, stage 3 commenced. Muslim women and children started a non-violent sit-in at Shaheen Bagh area in Delhi blocking traffic for more than a month.

The design was to compel Modi to use force so he could be embarrassed internationally. Police revelation that PFI (an extremist organisation) provided funding of over 1.2 billion rupees for the protests took the wind out of the protestors shield. Money was traced to the bank accounts of senior INC leaders. Addressing of the protestors by Tharoor and Iyer and the latter’s confabulations with Pakistani establishment, the videos of secessionist Imam inciting Muslims to block a strategic 22 kms passage connecting Assam and mainland India, tweets from Pakistani Minister asking Delhiites to defeat Modi’s party in ensuing state elections and Sonia leading INC protest to the Parliament supporting Shaheen bagh, all point to the INC being in league with enemy country to destabilise Modi. As Modi rightly said Shaheen bagh is a plot not a protest.

One can understand the frustrated opposition and enemy country playing gimmicks to embarrass Modi internationally, but is it appropriate for an academic to support their secessionist agenda?