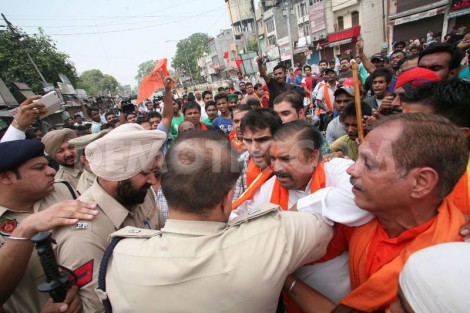 1. Attack on a Hindu sacred shrine in Kashmir by radical Muslims who are attempting to build a mosque on the occupied site

Report:  As part of the long-term harassment of Kashmiri Pandits and Kashmir’s Hindu heritage, a spot in the Pirpanjal range considered to be sacred by the Hindus is occupied by radical Muslim groups with plans to construct a Mosque.

Report: A Hindu girl from Bayar,  a rubber plantation area near Kasargod in Kerala was abducted and gang-raped by three men. Kerala Police arrested the main accused in the abduction, and identified as Zakaria. The report stated when the victim resisted the rapists they reportedly stabbed her.

3.      Brutal attack by assailants on a RSS karyakartha  in Bangalore

Report: Phaneendra, the Jalahalli Nagar Ghosh Pramukh of the RSS, was attacked by a group of goons while on his way to attend morning Shakha (routine RSS gathering). A seriously injured Phaneendra was admitted to Mattikere MS Ramaiah Hospital.

Report: The management of TKM Centenary School in Kollam  have been pressurized by the radical outfit , Social Democratic Party of India  to not perform a dance event based on the national song Vande Mataram. The school which initially planned to have a dance performance on Vande Mataram, had to cancel the event after SDPI threatened to unsettle the event.

5.  In Pakistan married and pregnant Hindu women are forcibly re-married to Muslim men and converted to Islam

Report:  At a press conference held in Karachi by human rights groups helping Pakistan’s minorities, Amarnath Motumal, president of Hindu Panchayat, Karachi Division claimed that women who were already married within the community and were pregnant were now being forcibly remarried and converted to Islam.

Report: As a result of intense political pressure, the police of Kolkata have unjustly withheld permission to Hindu Samhati (a non-political Hindu organization) for their event to commemorate the great patriot Gopal Chandra Mukherjee, who during the 1946 Great Calcutta Killings  raised Hindu self-defence groups to resist attacks from the goons of the Muslim League.