Western Postural Yoga: Promoting Postures in the name of Yoga 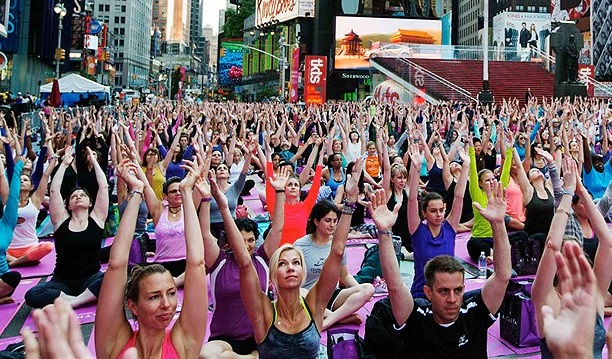 Yogāsana practice can be a gateway to deeper spiritual teachings with a proper background of the Yogic wisdom or āsana practice can just be a form of exercise, aerobics, and gymnastics. Āsana, physical practice (of any style) with the goal of fitness, wellness and physical beauty alone, is NOT Yoga!

However, this fact is completely ignored in the latest “Yoga” scene of the Western countries! Let us take the current scenario of “Yoga” in USA. There are over 35 million people practicing “Yoga” today in USA alone. There is a multi-billion dollar industry operating in the name of “Yoga”. There are over 1,00,000 Yoga instructors and many thousands are getting their certificates from a certifying agency called “Yoga Alliance” to teach “Yoga”, every year. “Beer Yoga”, “Yoga with Goats”, “Yoga, wine and chocolates” are a few examples of latest fads being practiced in the name of Yoga!

The history of Yoga in the Western world

Some of the first teachers who brought Yoga to the Western world were Swāmi Rama Tirtha in 1902, Paramhansa Yogānanda in 1920 and disciples of Swāmi Sivānanda of Rishikesh. These teachers stressed upon the spiritual aspects of Yoga. They taught Vedānta as the philosophy of self-realization and presented Yoga as the methodology to achieve it.

Unfortunately, over the last few decades, physical postures, āsana practice has gained importance, and the philosophy of Yoga have been forgotten. Yoga masters like B.K.S. Iyengar, K. Pattabhi Jois, T. Krishnamāchārya and Swāmi Satchidānanda made it imperative that their students in the West understood Yoga philosophy through the teachings of Vedānta. Earlier Yoga teachers trained by these masters had to go through rigorous training, not just to learn various āsana, prāṇāyāma, kriyā or bandha, but also to understand the complete system of Yoga and the philosophy, which lives and breathes through the physical practice, āsana.

There are various other conflicting interests at play, such as, resistance in exploring eastern scriptural based teachings, incentive to make quick and fast money, name and fame. These and other reasons dissuade many teacher training programs from spending training hours for important philosophy teachings.

Many yoga teacher training programs minimize or completely avoid, ignore or dilute the authentic teachings of Yoga. A few Sanskrit words such as “Namaste” and “Om” uttered once in a while are supposed to make a physical practice, often times similar to gymnastics or acrobatics, into “Yoga” practice! There are spiritual words and phrases like “love”, “divine” “find your truth” and other words interwoven in the physical practice but essentially, the spiritual aspect of the teachings of Yoga has fallen to the sidelines. The result is that today very few Yoga teachers (and consequently Hatha yoga practitioners) know about the teachings of Yoga-Vedānta or the essence of Yoga philosophy.

It is unfortunate that there is much confusion about what Yoga is, and also about the terminology. For example, many do not know the difference between ashtānga style of Hatha yoga and Ashtānga Yoga as presented by Patañjali. There is ignorance about the importance of the study of Bhagavad Gitā (to get an idea about how Yoga is applied in daily life) in yoga practice.

Mispronunciations are unfortunately rampant, “āsana” pronounced as “asaanaa”, “ājñā” pronounced as “aajnaa” or even “aahnaa” by few Spanish speakers. The word “chakra” often gets pronounced as “shakra”. A new garbled up language in the name of “Yoga” is getting passed around! Sanskrit is a very precise language. If pronounced incorrectly, the word has absolutely no meaning or can even have a completely different meaning than the intended one. For example, there is a tremendous difference between the meaning of mala (waste) versus mālā (string, garland) and very few Yoga teachers and practitioners are even aware of these basics of the language of Yoga!

If one is to call oneself a “yogi”, or teach “yoga” one should understand the philosophy and the appropriate pronunciation of the terminology at least at a basic level. Usage of relevant Yoga terms, their pronunciations, understanding and awareness of the higher goals of Yoga should be a pre-requisite for anyone who would like to teach Yoga, even if one decides to teach just the physical aspect of Yoga āsana practice.

One who teaches Yoga should be well grounded in the understanding of what Yoga is, and in the basics of Yogic wisdom. A Yoga instructor may or may not be interested in Yoga philosophy or plan to teach Yoga philosophy in āsana based class, but when one calls oneself a Yogi or a Yoga teacher, it is expected that he/she should know what Yoga is about in its entirety. Even though he/she might not have learnt Sanskrit from an early age, if one is teaching Yoga, the teacher should be able to say simple Hatha yoga related words correctly and should know the meaning of these words.

Why is there a demand for proper well rounded training in the Western countries from a science teacher or a ballet instructor and not from a Yoga instructor? Is it because there is no authority demanding it?

Why is it alright to forget the rich tradition of Yoga and alienate it from its heritage and roots from thousands of years ago?

Tradition says that yogic science was a divine gift revealed by Lord Shiva, the Lord of Yoga, to ancient sages for the humankind to realize their inherent divine nature. This wisdom has been passed on for centuries through authentic teachings, through guru-shishya (student) paramparā (lineage).

Yoga is essentially so much more than Hatha yoga, postural yoga practice and techniques, āsana-based classes. Unfortunately, Yoga is now being prescribed for its side effects (physical fitness and wellness), while its real goal — spiritual awareness — is being sidelined.

Unfortunately what is happening in the West is being imitated by many in India. Why are Indians following this Western commercialized version of “Yoga”? Shouldn’t those of us who know about Yoga philosophy, voice our concerns on dilution and appropriation of Indian traditions and heritage?

If there is a serious lack of understanding of the basics of philosophy and language of Yoga today, we will pass on to our future generations, a mere physical exercise regimen called “Yoga”, stripped from its real essence as a spiritual practice. The consequences of our decisions today will impact lives of future generations. The choice is ours.