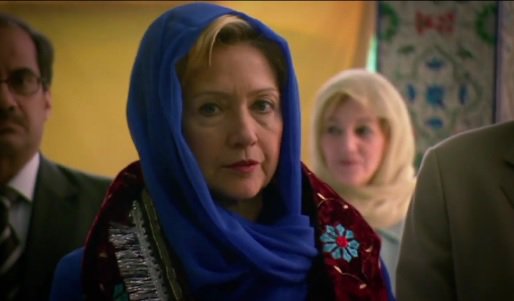 In her latest campaign ad https://www.youtube.com/watch?v=WKoPjeSt2CM, Hillary Clinton has donned the hijab.

Muslims are currently estimated to be around three per cent of the US population. Their number has doubled since 9/11, and so has the number of mosques in the US.

After the deadly terrorist attacks on its own soil by the Muslim terrorists, the US has stepped up its efforts to keep Muslims in good humour, has opened its gates for them, has increased its outreach to the Muslims worldwide, and now there are calls in the US to place curbs on free speech to keep Islam above scrutiny and criticism.

Further, Iftar was never held at The White House before 9/11. No, the dinner hosted by Thomas Jefferson for the Bey of Tunis’ temporary envoy, one Sidi Soliman Mellimelli, was not the first White House Iftar. During the six solar months Mellimelli was in Washington, the lunar month of Ramadan occurred. And as it happens, during that Ramadan observed by Mellimelli, but naturally unobserved, hardly noticed, by the Americans, President Jefferson invited Sidi Soliman Mellimelli for dinner at the White House. He probably during that six-month period had done it more than once. Mellimelli replied that he could not come at the appointed hour of three thirty in the afternoon (our ancestors rose much earlier, and ate much earlier, and went to bed much earlier, in the pre-Edison days of their existence). That time fell, for him, but not for Thomas Jefferson or anyone else in the United States of America, during the fasting period of the month of Ramadan. He replied that he could not come at the hour set, that is, at half-past three, but only after sundown.

But after 9/11, Iftar has been regularly held at The White House. Evidently, if violence brings such rich rewards for the Muslims, they would never give it up.

And the dividends only continue to increase in size as the Hillary Clinton’s Hijab shows.

Hijab, and its variant, the burqa, is the most potent weapon and symbol of the gender segregation in Muslim societies, which is at the root of dysfunctionality of Muslim societies. It keeps women subjugated, uneducated, without opportunities to work, thus making them totally dependent on menfolk in the society. For Hillary Clinton to sanction Hijab is to sanction the oppression of Muslim women even in the free society of the US.

But why did she don the hijab? She knows that presidential races are a close affair. A win or loss occurs with a difference of a couple of percentage points. So, at three per cent of the total population, Muslim votes would become decisive, as they vote as a single bloc, and vote 100 per cent. And to garner such an all-important vote block, a politician would do anything. And so Hillary Clinton has submitted and donned the Hijab in the campaign video.

And Muslim numbers are sure to increase, with continuing high immigration from Muslim countries, caused by dysfunctional societies and barren economies in those countries, and encouraged by the appeasement and dhimmitude of the American politicians. The crucial factor of the higher fertility rate of Muslim families also plays a big role.

Equally, Americans would do well to remember that increased Muslim numbers would certainly cause Islam’s Rule of Numbers to kick in.

With the Rule of Numbers in place, submission and sharia facilitation by the American politicians would only accelerate, and more sharia would mean less freedoms, less commerce, and finally, less kafirs.

This happened even as Europe slept, and now when it seems to have woken up, it continues to grapple for a solution finding none.