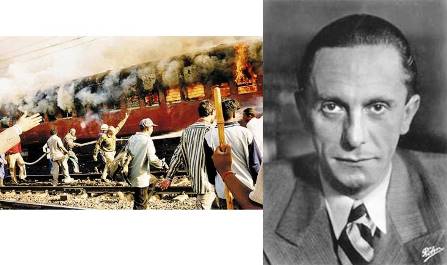 Whilst preparing the nationalistic upsurge against the foreign regime of Alexander of Macedonia in the territory of erstwhile Bharat, (that included the present day Afghanistan or the Af-Pak Region), the celebrated professor of Political Science at Takshshila University, Acharya Vishnu Gupta or Chanakya laid great stress on building a public discourse of nationalistic thought. This disruptive and lateral thinker of yore instilled with great success the importance of crafting a public discourse which is intended at desired actions or inactions in the corridors of power. He thus laid the strong foundations of shaping the battlefield from the environs of the hinterland. A similar attempt at Manufacturing, Propagation and tunnelling of public discourse was propounded for the Germans by Joseph Goebbels in the years leading to the Second World War.

These are two plausible examples which should alert the public intellect to the importance of letting a public discourse be built up or terminating it in the bud. The former was successful and the latter put its delinquent propagator on a path of self-destruction. Chanakya achieved the liberation and integration of a nation whereas Goebbels’ efforts led to a human catastrophe. The basic reason for the success and failure of the two was the element of Intrinsic Truth, which cannot be ambivalent to even an amateur.

There is something similar, profound and yet worrying in the current public discourse which represents the general response to acts of terror in the unfortunate yet real Indian governance mechanism supported by the pseudo-secular Establishment. There has been a series of massacres and acts of terror which have been perpetrated with an intention to destabilise the country. These have been followed up by a manufactured public discourse which  did  not  implicitly indicate any  wrongdoing on  the part  of  the  perpetrator, but  the  general narrative which was offered by the TV channels, media houses, newspapers and the secularatti was that of the sufferers bringing the suffering onto themselves. We shall examine a few.

The massacre in Godhra was a very real act of cowardice: a 2000 strong mob stopping the Sabarmati Express shortly after it pulled out of Godhra station on 27 February 2002. The train ferried several bogeys of Kar Sevaks returning from Ayodhya. In the eons gone by, Ayodhya literally meant ‘A-Yodhya’, a place where even the consideration of ‘Yudh’ or war was sacrilege. However, the mob attacked the bogeys with petrol and acid bombs. Some witnesses opined about explosives being used. Four bogies were gutted and at least 57 people, including over a dozen children, were burnt alive.

Some versions have it that the passengers shouted anti-Muslim slogans; others opine that they taunted and harassed Muslim co-passengers. Another section has another version suggesting the Muslim passengers detrained at Godhra and appealed to the local co-religionists for help. Others say that the slogans were enough to enrage the local Muslims and that the attack was an act of revenge.

Another eon can safely pass before the veracity of these versions can be ascertained or challenged, but there is nothing on record which establishes, indicates or can suggest that the Kar Sevaks started the violence. Anyone with a whiff of commonsense can verify with a small reference to his own intellect. It is an extraordinary leap of logic to claim that slogans shouted from a moving train or at a railway platform should have been enough to enrage local Muslims, enough for 2,000 of them, to have quickly assembled at eight O’clock in the morning, having already managed to procure petrol bombs and acid bombs.

There can be plausible disputes about the versions of some of the Kar Sevaks, about the attack being pre- meditated, or about the 2000 strong mob ready and waiting. But there can be no denying that the final gory outcome was indefensible and unforgivable. How so ever grave the provocation, if there were any, this ghastly act will remain unforgivable.

The first official attempt at obfuscation and alteration of public discourse was an enquiry by the then Secular Railway Minister, Lalu Yadav whose constituency back home consisted of the Muslim-Yadav vote bank. Today Lalu Yadav is in jail, convicted for corruption. However, it was the inability of the masses to not differentiate between an act of terror and a communal clash. An act of terror is perpetrated, usually in a premeditated fashion. A communal clash is where two communities with a history of mutual hostility clash violently, usually spontaneously.

There is no need to elucidate on the public discourse which now marks the Indian landscape with reference to Godhra Incident. The entire discourse, which is actually a tirade, is aimed at the majority community of Gujarat. It is left to an average Gujarati  to  defend  himself  against  this  narrative  built  up  by  journalists  closely  associated  with corporate interests and who thrive on political patronage.

It is again beyond reasonable comprehension as to how it is a tragedy when Graham Staines, (who made himself unpopular through brazen conversions and was warned several times) is burnt alive and when Kar Sevaks are burnt alive for no fault of their own, it is not a tragedy but an outcome of their own wrongdoings!

Did the same profit driven, nation-blind media and secularatti declare that New Yorkers invited the wrath of Jihadis when the Twin Towers were attacked on 9/11? Remember, there was enormous resentment among the Islamic fundamentalists, if not the entire spectrum of Muslims, about American foreign policy. Obviously, we can’t even consider whether such a horrible act is justified on any ground. The Secularatti seems to have become prisoners of their own rhetoric. No horrific massacre or act of terror presents the Secularatti an occasion to leave aside its prime occupation of bashing its intellectual adversary, the so-called Right Wingers led by Sangh Parivar.

Any media, and indeed any group or establishment, which does not take into account the genuine concerns of its audience, risks losing its own credibility and eventually the paycheck it may have wanted to protect or enhance in the very first place.

An effort small in its beginning but gigantic in its magnitude is now being made to craft a similar public discourse. It is being propounded that the attack on Narendra Modi, the BJP’s PM Candidate, in Patna on 27 October 2013 has its ‘roots’ in Godhra. However, Godhra’s own roots lie in vote bank politics. No World Power has allowed such Goebbelsian tactics to reach the pinnacles of prominence that anti-national elements are allowed space to justify acts of terror.  If at all the Indian media—especially electronic—which constantly blares its Master’s Voice into the ears of an average Indian, does not want to be relegated to obscurity, it will need to redefine its role in its own boardroom meetings with an eye on nation building.

Those who believe in the intrinsic strength of the Indian Civilization will have to raise their voice and be counted. History is watching as a bystander, as to who it shall nominate as Chanakya or who as Goebbels, who had to commit suicide ultimately.