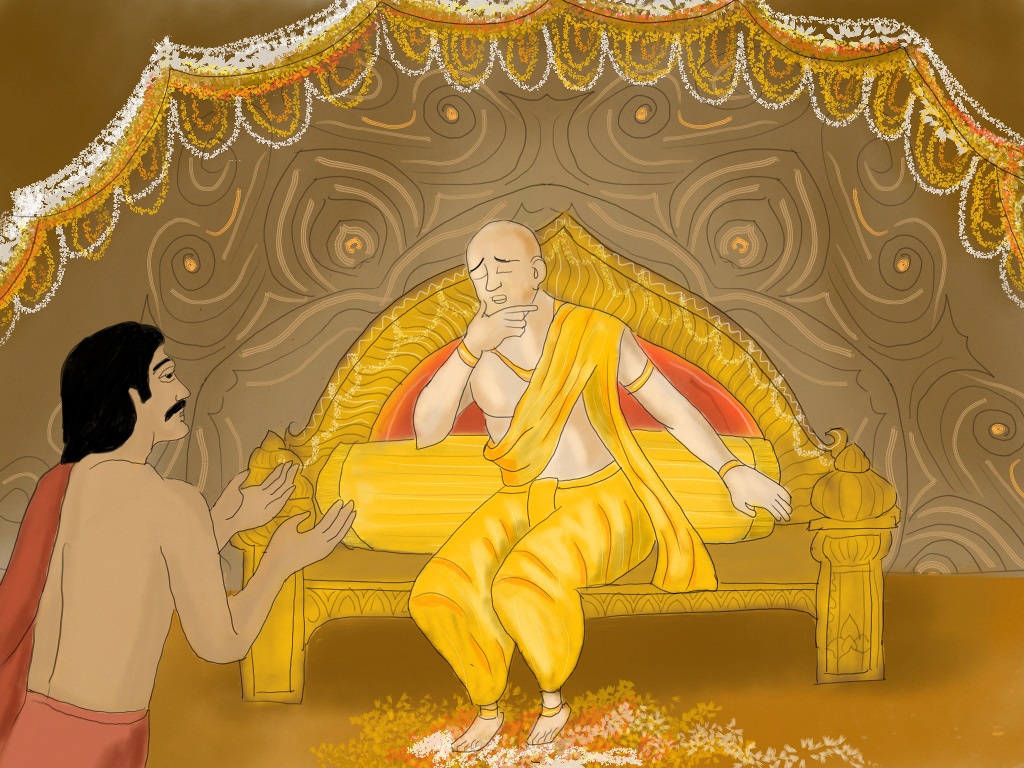 There was once a guru who attracted many disciples. When he died his devotees did not wish his sect to come to an end. There was a young scholar who had served the guru and who happened to be considered wise. The disciples made him the new guru and offered him all the reverence which they used to offer to their departed guru.

The new guru, by his learning, impressed the devotees even more than his deceased predecessor. Once every year he roamed about places, visiting the houses of disciples, blessing them and receiving enthusiastic ovations.

In a small village named Shravasti, there lived Ramnath, a poor farmer, who happened to be a disciple of the earlier guru. The date of the new guru’s arrival in his village had been announced and Ramnath was in ecstasy. From early morning till late in the night he was busy erecting the rostrum on which the guru was to sit and deliver discourses. When that was done, he was running about arranging for large quantities of flowers for the guru. It wasn’t that the other villagers were not working for the reception. But Ramnath’s was excitement and joy personified.

His son was sick. From hour to hour news about the son’s condition reached him – and they were hardly good news. But he had no time to spare for the son. “Nothing is more important than the guru’s visit. God will cure my son since I am busy for the guru,” he said to every messenger who came with appeals from his wife or mother for him to hasten home.

At last the young guru arrived. He was received by the influential people of the village; but not knowing all that Ramnath had done for his visit. But while all were busy welcoming the guru, an old lady came running to Ramnath and informed him that his son was dead!

“Never mind,” said Ramnath smiling, “Here is my guru, the living God. His grace can instantly remove my sorrow.”

Ramnath placed some water in a vessel before the guru and beseeched him to dip his foot in it. The guru obliged, although not knowing what was in Ramnath’s mind. In the meanwhile, Ramnath’s relatives had carried the dead body of his son to the spot. Chanting the guru’s name loudly, Ramnath sprinkled the water on the dead body.

The crowd watched the scene with bated breath. Many took Ramnath to be a madcap. But to everyone’s surprise, Ramnath’s son opened his eyes and soon sat up by himself as if woken up from a deep slumber. The only man who did not seem surprised at all was Ramnath himself. “This was bound to happen,” he exclaimed, “Is there any crisis which cannot be overcome by the guru’s grace?”

The news of the miracle spread like wildfire. Hundreds of people rushed to the guru and became his disciples. Soon the rich landlord of the area heard of the guru. He personally came to invite the guru to be his guest. The guru gladly accepted the invite.

At the landlord’s house, the guru was given a king’s reception. A dozen servants were at his beck and call. Every day he was offered a set of a new silk dresses. The landlord and his family prostrated to him once in the morning and again at night. The services of a cook who was once employed in the king’s kitchen was secured to cook for the guru.

The guru, though amazed at his own popularity, was convinced that he deserved nothing less than such royal treatment!

One day, while the guru sat before the deity in meditation, the landlord’s five-year-old son toddled up to him and yanked his garland. Angry at this disturbance, the guru planted a hard slap on the infant’s cheek. The child swooned away.

The guru closed his eyes again as if nothing had happened. Servants whisked away the boy to another apartment. A prominent physician was summoned immediately. But he came there only to announce that the boy was dead.

The landlord’s wife and other women began wailing. But the landlord himself consoled them reminding them of the guru’s miraculous powers. All waited patiently till the guru opened his eyes. The landlord then placed his son’s dead body before him and said in an appealing tone, “Kindly pardon this little sinner, O great soul, and give him back his life!”

A big crowd soon gathered there to see yet another miracle. The guru cast a proud glance at them and smiled and ordered the landlord to fetch a little water. The water was brought in a silver vessel and the guru was pleased to dip his foot in it. “Take it and sprinkle it on your audacious son. All will be well. Now, begone!” said the guru.

But all was not well. The water was used to the last drop. When there was no result, a fresh bucket of water, sanctified by the guru’s feet, was literally poured on the boy. Yet the boy continued to lie dead!

The women who had stopped wailing now, burst into loud cries. The landlord’s eyes became rounder and more red. He advanced at the guru and blurted out, “Give the boy back his life or get ready to lose your own!”

The guru was at his wit’s end. He tried to quote scriptures in a bid to explain away the child’s death. But he left the quotation in mid-sentence when his eyes fell on the landlord’s clenching fists.

One of the guru’s disciples had in the meanwhile run to the other end of the village to inform Ramnath of the unexpected development. Ramnath appeared on the scene just when the landlord’s wrath was about to find a violent expression.

“O, guru! Have pity on us and revive the boy!” Ramnath uttered and touched the guru’s feet with his fingers which were smeared with his own tears and then moved his hands to the dead boy. The boy opened his eyes. His mother instantly took him in her embrace.

“It was a mere play of the guru,” said Ramnath looking at the people who were bewildered.

The guru left the place the same day. He expressed his gratitude to Ramnath. But Ramnath would only say, “Why are you making fun of this poor slave of yours, O master? Is it not all your play?”

All through their lives while the guru placed the responsibility of the miracles on Ramnath – Ramnath eternally believed it to be a play of his guru.

So, whose miracle was it anyways?

Rishi Tales (Volume 1) 21 Forgotten Sanskrit Tales Translated and Retold with Illustrations by U. Mahesh Prabhu is available for purchase at Amazon.