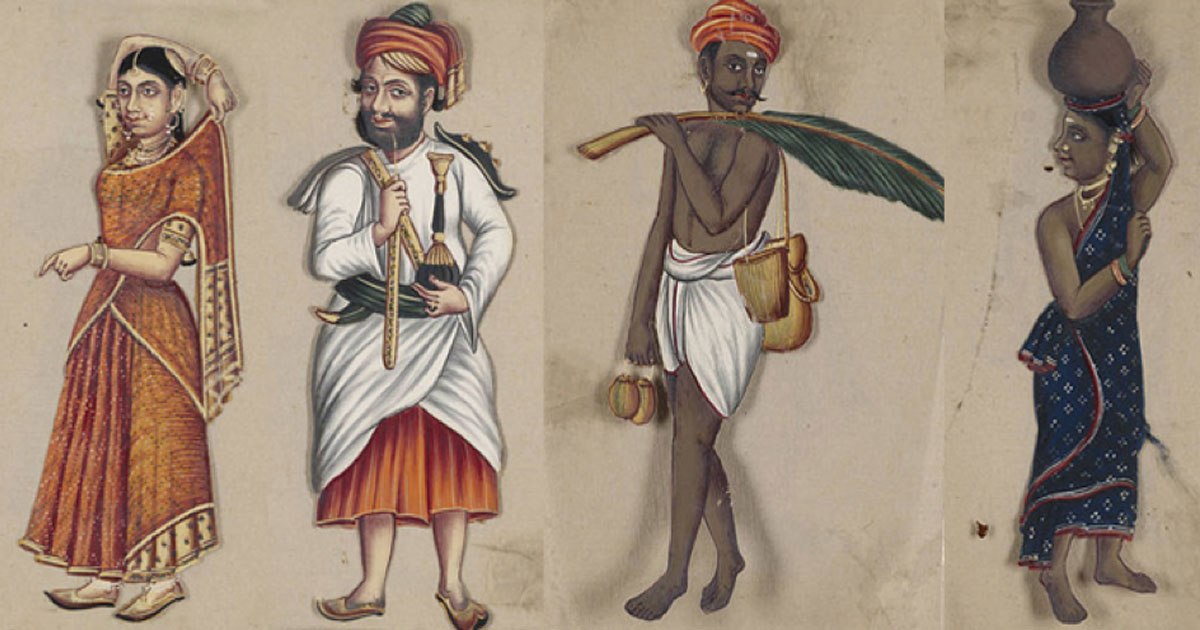 “The impression it leaves on my mind is that it is the report of a drain inspector sent out with the one purpose of opening and examining the drains of the country to be reported upon, or to give a graphic description of the stench exuded by the opened drains.”

Today, in most countries, while the right-wing believes in keeping things as they are or slowly changing things, left-wing politics is distinguished by its insistence on rapidly attempting to change society to make things better. In more ancient times, the Roman Republic had two main political “wings”: the Populares who favoured the lower-class plebeians, and the Optimates who represented the interests of the landed aristocracy.

However, such divisions have never held true in India. Ancient India was a dynamic powerhouse of critical and applied thinking. The state, as conceptualised in the Vedic tradition, catered to all sections of the society. In the 300 B.C.E. treatise, Arthashastra, Kautilya explained the necessity of a dharmic system of governance primarily to prevent the rise of disorder and anarchy known as matsyanyāya (law of the fish), where the big fish swallow the little fish. In the absence of a strong law-wielder, the strong swallow the weak and a law of the jungle prevails. But under the protection of a dharmic state, the weak can resist the strong.[2] This is the Sanatana Hindu idea of a dharmic state.

Thus, pre-20th century India mostly avoided the class warfare and social battles which characterised many other societies, and achieved a sophisticated civilisation with prosperity for all. Although colonial and modern left-Islamist historians dismiss Hindu history as being nothing but a “5000-year old history of caste and other forms of oppression”, there is virtually no recorded evidence in India of battles or wars having been fought on the basis of class or social oppression. Slavery was hardly seen in India until the arrival of the Islamic invaders.[3] Many slave revolts took place in various other countries during different periods. A few examples include: the Servile Wars[4] in ancient Rome, the Zanj slave rebellion[5] in the medieval Islamic world, Peasants’ Revolts[6] in medieval Christendom, the slave revolution of Haiti[7] and Nat Turner’s slave revolt[8] in the United States. Class warfare and slave rebellions have been common in most other countries for most of recorded history. No wonder that when Karl Marx said, “all of human history is a history of class struggle”, [9] it rang true, but only from a narrow, Eurocentric viewpoint.

That there are virtually no such occurrences in pre-colonial Indian history means that the supposedly oppressed sections of India never really felt “oppressed” enough to violently revolt against their so-called oppressors. Thus, both right and left colonial propagandists have always been really frustrated at the Shudras, the Dalits, the Tribal people and other designated “oppressed” sections of Indian society.

The Sanatana Hindu idea of a dharmic welfare state

In contrast to ancient Rome where politics was divided between competing interests of the plebeians and the aristocracy, in Sanatana Hindu civilisation (which encompasses both religion and culture), the king and the state have always been held accountable to all citizens, especially the weaker sections. In the Arthashāstra, Kautilya delineated the rights of the dāsas and the employed servants.[10] In describing some broad outlines of the qualities of an ideal king, he says:

“By overthrowing the aggregate of the six enemies, he shall restrain the organs of sense; acquire wisdom by keeping company with the aged; see through his spies; establish safety and security by being ever active; maintain his subjects in the observance of their respective duties by exercising authority; keep up his personal discipline by receiving lessons in the shāstra; and endear himself to the people by bringing them in contact with wealth and doing good to them.”

Kautilya describes a king as someone who dedicates his entire life to serve his people and strives for the welfare of the nation.

“The king’s happiness and welfare lie in the happiness and welfare of his subjects. He shall only take what pleases his subjects as good. Hence, the king shall ever be active and discharge his duties. The root of wealth is activity, and of evil, its reverse. In the absence of activity, any present and future acquisitions will perish. By activity alone, he can achieve both his desired ends and abundance of wealth for the people.”

Jāti may have saved Hindu civilisation from extinction

The so-called caste system is held up by the colonial and the left propagandists as the main system of oppression in India. However, as has been shown by S. N. Balagangadhara et al, the theory of caste is a fictitious colonial superimposition on Indian society.[13] India never had a caste system. But it did have the jāti and the varṇa systems. While the Brahmin varṇa dominated the intellectual scene and the Kashatriyas formed the royalty, the Vaishyas and the Shudra[14] classes were well educated and wealthy and thus wielded the most de facto political power.[15] The jāti system is a decentralised and autonomous system of self-governance. It was a major source of resistance to Islamization. Alberuni wrote that all jātis, especially the so-called lower jātis, showed remarkable resistance against conversion. H.H. Risley writes that the lower classes were most particular about ‘caste preservation’. Conversions of so-called high jātis were also few. Hindu religion and philosophy were ancient, vast and deep. Hindu intellectuals were proud and even vain. Historian, K. S. Lal notes:[16]

“Caste system was bad, but it had two compensating features. One was that since the low classes were ‘distinguished only by their occupation’, and they intermarried, there was occupational and vocational mobility… Another is it had (and has) a hierarchical structure, and even low caste people feel proud of being superior to some other lower castes…”

The pro-colonial right and the anti-colonial left?

In the West, especially after the two World Wars, left-wing groups cheered on the fall of the colonial empires. Among the empires that fell were the British empire in India and Africa, the French empire in Algeria and Vietnam, and the Dutch empire in Indonesia. In the colonised countries, nationalist groups led the struggle against the colonial powers. Thus, the Western left ended up cheering on class struggle in their own countries and supporting nationalist rebels in the former colonial possessions, while right-wing groups supported a continuation of colonisation.

However, Karl Marx, whom the left across the world considers as one of their main leaders, had nothing but contempt towards the colonised Indian people. He malevolently supported British colonialism in India as a means of overcoming Oriental Despotism. Marx wrote in a typical Abrahamic monotheist fashion by presenting a bigoted view of Hinduism and the Indian village life:[17]

“We must not forget that these little communities were contaminated by distinctions of caste and by slavery, that they subjugated man to external circumstances instead of elevating man (as) the sovereign of circumstances, that they transformed a self-developing social state into (a) never changing natural destiny, and thus brought about a brutalizing worship of nature, exhibiting its degradation in the fact that man, the sovereign of nature, fell down on his knees in adoration of Kanuman [sic], the monkey, and Sabbala [sic], the cow.”

Today’s globe-trotting left and the educated, colonised classes of India have taken on the burden of carrying on the same falsification, bigotry and contempt towards the polytheist civilisation of India.[18] The one point of agreement between a Karl Marx, a right-wing imperialist like Niall Ferguson,[19] and an educated, colonised Indian like Arundhati Roy is their common hatred of the indigenous, polytheist Hindu civilisation. From a Sanatana Hindu point of view, both such right and left colonial propagandists are detrimental to human freedom and dignity. Whereas the pro-imperialist right supports Western imperialism, the global left also supports a form of cultural imperialism by propping up Islamic supremacy and advocating the eradication of the indigenous, polytheist religion and culture of India.

A sort of fanatical way of thinking is part of the very fabric of the political religions of Christianity, Islam and Marxism. This is what has led these ideologies to bring about enormous, unnecessary harm and violence upon the human species. The contemporary political religions of right-wing imperialism, left-wing progressivism and left-liberalism carry on similar misanthropic, apocalyptic forms of thinking.[21] Human history is often viewed by many right and left thinkers in myopic ways to fit certain preconceived notions. Such attempts are always flawed. It is this narrow-minded fanaticism that leads both the right and the left to show contempt towards Hindus in general and the “oppressed” lower class Hindus in specific.

When seen from a holistic viewpoint, left-right politics can be said to reflect human nature itself. Depending on the place and time, the appropriate pace of change or no change at all can be chosen for a given society. From a Hindu perspective, both left and right political policies can be valid, based on deśa-kāla-pātra (the appropriate place, the time and the subject).

Finally, to achieve complete decolonialisation, the flawed notion of an Indian society that was forever oppressed must be rejected entirely. The colonial theory of “caste” also must be similarly thrown out. In place of such non-stop negativity, the positive contributions of the Sanatana Hindu civilisation must be recognised and given their due place in the world. Hindu civilisation has presented to the world a unique model of preserving social harmony while achieving prosperity. As an example for the world, India must once again adopt the Sanatana Hindu concept of a strong, law-wielding, dharmic welfare state that protects and propagates the indigenous, polytheist religions and cultures, while seeking to achieve sustainable economic prosperity for all.

[19] “Interview with Shashi Tharoor: To give the British credit for things that were never intended to benefit India is a mistake”