Why Smriti Irani needs to introduce Sanskrit on a war footing 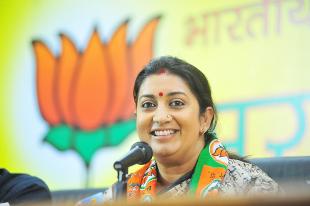 For Hindus abroad, depending on circumstances, knowledge of Indian languages is probably lost. In a few places, native languages are perhaps viable, like Hindi in Suriname or Tamil in Singapore. If Hindu families can speak their Indian language inside the home and transmit it to the children, so much the better. But in mixed families and in oceans of powerful languages like the Anglosphere, children or grandchildren are bound to take to the language of their surroundings, so it is a waste to still your guilt feelings as an immigrant by forcing your children to learn a smattering of Bengali or Kannada. It is better to teach your children Hindu values, and if this has to take the form of a language, let it be Sanskrit, the key to the main Hindu scriptures. For the rest, let  them acquire a thorough grounding in Hindu stories and ritual, in English or whatever vernacular they take to.

English is a foreign language

In India itself, English should be shown its place as being primarily a foreign language. Mine is a position against self-interest, for I will never have more fluency in an Indian language than in English; by contrast, all Indians and Westerners pleading for English happen to be self-serving. At any rate, an anti-English stand is not voguish, now that Indian politicians are not just sending their own children to English-medium schools while promoting vernacular-medium education for the common man, but openly replace vernacular with English schooling. This is a political choice: either Panjabis and Malayalis will speak English with each other, like Danes with Koreans or Congolese with Pakistanis; or they will speak an Indian language. If you want Indian unity, you’d better aim for an Indian language that will set India apart from the Anglosphere.

That Indian language can only be Sanskrit. At this distance, we can say that it was a fateful day when the first President of India, Rajendra Prasad, cast the deciding vote in the Constituent Assembly in favour of Hindi as link language, to the detriment of the other candidate, Sanskrit. Hindi was not accepted by the chauvinist speakers of the other vernaculars. One of the good reasons was that it was but a recent language, a common denominator between old literary languages like Braj Bhasha, Awadhi, Rajasthani and others. Hindi as it is, was deemed vulgar by speakers of highly civilized non-Hindi languages like Bengali or Telugu. It didn’t have the kind of prestige that could overrule such objections.

By contrast, Sanskrit if chosen as the link language would have sent a cry of admiration through countries like China and Japan, Russia and Germany, France and America. The state of Israel, that chose to make Biblical Hebrew its first language, would have understood very well that India made its main Scriptural medium into its second language. The Flemish, who waged a struggle against French-language masses all while accepting Latin masses as a matter of course, would have understood it if the Indians had preferred their common sacred language over a vernacular. Even the Muslim world would have understood it. Most importantly, it would have been accepted by the Indian people. Speakers of the constituent members of the Hindi commonwealth would have had no objection, and speakers of non-Hindi languages (even Tamil chauvinists) would have had fewer objections than against Hindi. As for the English-speaking elite, it would militate no harder against one Indian language than against another.

The vote in the Constituent Assembly, fifty-fifty between Sanskrit and shuddh Hindi,  shows how far India has slipped, and what an outrageous failure the so-called Hindu Nationalist movement has been. If the vote were held today, it would rather be fifty-fifty between English and Bollywood Hindi, i.e. Urdu. The secularists were then a small coterie around Nehru but now the same stream of opinion controls all the cultural and other institutions. Back then, a vote for English would be unthinkable, now the same taboo counts almost for a vote against English. The Muslims were only 10% and smarting under their guilt for the Partition, not in a position to make demands; now they are 15% and growing fast, and in active opposition to every language policy that smells of either Hinduism or nationalism. Sanskrit has been borrowed heavily by the South-Indian languages and would be welcomed by their speakers (so would shuddh Hindi, for that matter, and for the same reason), whereas “Hindustani” or Urdu brings Hindi a lot closer to the official language of Pakistan but at a greater distance from the Southern languages of India itself.

Admittedly, Sanskrit is a difficult language, but then it is equally difficult for everyone. And if one positive development can be mentioned since 1947, it is the decreased importance of caste pride, which led many upper-caste people to have a sneaking sympathy for the Nehruvian anti-Sanskrit policy, which at least kept Sanskrit out of the hands of the lower castes. One of the formative episodes in Dr. Ambedkar’s life was when he was denied the right to study Sanskrit in school because of his low caste. It helped make him a partisan of Sanskrit as national link language, a choice not followed by his so-called followers in the Dalit movement. They favour English, a choice unthinkable to the freedom struggle generation.

So, the anti-Sanskrit forces are a lot stronger than in the late forties, when they very narrowly won the day. Still Sanskrit is the only chance the lovers of India have. Hindi failed, and English will only weaken Indian unity, apart  from being an utterly undignified choice of link language.

Brace yourselves for a difficult struggle – or for national disintegration.

Resolving the Aryan Question: A Comprehensive Presentation of Out of India Case – V