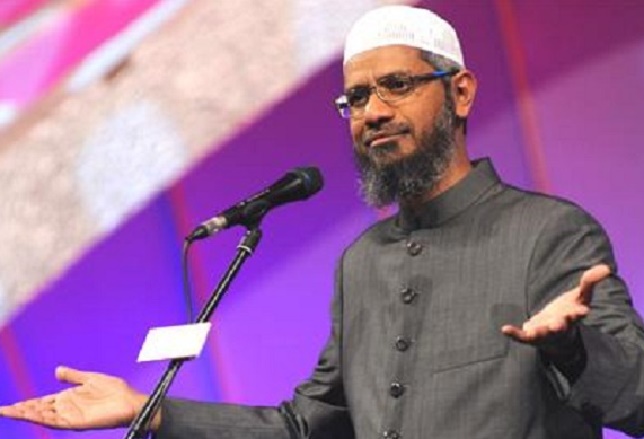 Zakir Naik, 50, the MBBS doctor, is right now in the midst of a tsunami created largely by the media- social and mainstream. They are all baying for the blood of the erudite and garrulous fanatic of the Quran and the Hadith, who slams non-Islamic religions on his widespread Peace TV channel and public conferences. And one of the most popular TV channels in India has had the courage to bring on several known Islamic scholars to endorse its 24×7 outrage against the man.

The charge is simple: it was he, who inspired two of the terrorists, who caused mayhem in Bangladesh recently. And now our country’s various ministry officials are doing their investigations to see what all there is in his speeches, videos and publications to exile him — from here to eternity.

On the face of it, Dr Naik, is guilty as hell. That old utterance of his about “Every Muslim should be a terrorist” nails him in an open-and-shut case. But it’s not as simple as that in India. There is the law and there is the Article 19 of the Constitution of India that guarantees him the right to freedom of expression. And our judiciary is very protective of it. Besides, the TV comes to millions of homes from satellites in the skies of space. These are not always governed by domestic laws. Complex space and internet technology are involved in controlling them.

Apart from the above revolutionary call to Muslims, the gentle televangelist has made several other malevolent observations. For instance, in one lecture he had said that the dastardly 9/11 tragedy happened, not because of Osama bin Laden, but because of the USA President George Bush.

But then, Dr. Naik is a master of self-defence through the use of double-speak. For instance, in one of his lectures, he had made allegations against President Bush by referring to conspiracy theories that suggested that the American government had lied about the attacks on the twin towers. Citing online documentaries, he had said, “If you see all this, it is a blatant, open secret that this attack on the twin towers was done by George Bush himself.” But on a subsequent occasion, when asked about the accusation, Dr. Naik said he had been misquoted and added: “People say Muslims have done it, and some others said Bush had done it. But who knows who did it?”

Ditto with his horrendous statement that “Every Muslim should be a terrorist”. He prefixed that statement with a cunning caveat, saying, “If he (Osama bin Laden) is terrorizing America, the terrorist, the biggest terrorist, I am with him.”

Since 1991, Dr. Naik has been well known in the field of Dawah. He, as a dā ī, is a person who invites people to understand Islam through dialogue. That question-and-answer route, combined with his erudition in comparative religion, an attire of suit and necktie, his computer-like memory, his eloquent English and his self-effacing but distinctive stage presence, constitute the weaponry that he uses to ‘demolish’ other religions and proclaim the supremacy of Islam as a faith. For instance, he is believed to have called the destruction by the Taliban of the tall and long-standing Buddhas in central Afghanistan’s Bamiyan Valley as an “education” to the Buddhists.

On one occasion, a video of his showed him pooh poohing, but ever so politely,  a young lady, who in an effort to show the benefit of idol worship, told him, standing on the stage, that she often stood before a photo of Lord Krishna and prayed for a solution to a particular problem. He first asked her why she at all needed Lord Krishna’s photo instead of just praying to an invisible god. When she replied that she had faith in the Bhagwad Geeta and hoped to reach an advanced state in her belief in God, he replied that (i) like all other Hindu religious texts, the Geeta, Chapter 7, did not advocate idol worship, (ii) all Muslims had already reached that higher stage of development and therefore did not need an idol to worship their God. The lady stood embarrassed and nonplussed.

Similar other episodes, including the abuse of the Vedas, have reportedly happened in Dr. Naik’s public sessions. Hence, the speed and sharpness with which he replies to questions from the audience raises the doubt about whether he indulges in “match fixing”, especially considering the immense funds that he has accumulated over the years. Remember, how the Saudi Arabia King had awarded him $ 200,000 in 2015 along with a certificate honouring him for his “service to Islam.”

There are a few other riddles as well about the man. Why did he choose to acquire the degree of MBBS, but not practice medicine? Why, when he became a full-fledged doctor (at the age of about 24), did he turn to Dhawah as an occupation? Was it some kind of a supernatural miracle? Was his father an aristocrat who could afford spending lakhs of rupees on his son’s non-productive education? When and where did the doctor assimilate all his knowledge of comparative religion? Answers to these elementary questions do not seem available in the public domain. Why?

This is not the first time that the Union government of India has been alerted to the dangers posed by Dr. Naik’s propaganda against non-Islamic religions through his Peace TV Channel. In 2010, a committee of secretaries analyzed the issue at the behest of the Prime Minister’s Office. Daily Mail online reported in 2012 that  “ a technical group comprising National Technical Research Organisation (NTRO), CERT-in and the Intelligence Bureau had explored various technical options to address the issue of showing illegal contents by the cable networks.”

The technical group came to the conclusion that “localized blocking of a specified TV channel using a terrestrial transmitter is neither feasible nor a financially viable option.” They further added that though a pan-India blocking of a particular channel through disturbing or jamming the downlink frequency of a particular channel was technically possible, such actions were “not internationally acceptable.” Thus, the government’s naïve attempt at blocking Peace TV channel using technology, rather than taking proper actions against Dr. Naik, the channel’s founder, had borne no result.

Now that Modi government is at in power at the Centre, it is hoped that the government will go beyond merely exploring the technological solutions and will actually enforce the law of the land on Dr. Naik.

First, there is Section 153A of the Indian Penal Code that makes it an offence for “Promoting enmity between different groups on grounds of religion, race, place of birth, residence, language, etc. and doing acts prejudicial to maintenance of harmony”.

Dr. Naik’s verbosity over the years clearly violates the above Section. The evidence being gathered by the Maharashtra Government as well as the Union Home Ministry is bound to get enough material to prove his crime under the IPC. The Attorney General, no less, needs to fling that tome of evidence against the “good” doctor.

The penalty for the offence of the above provision is up to three years of imprisonment with or without fine. That may not rid us of Dr Naik forever, but it will at least silence him for a while even as legislation is amended to enhance the punishment suitable to his crime.

Second, there is The Unlawful Activities (Protection) Act,1967 which can declare as “unlawful” any individual or association (any combination or body of individuals), which, among others, “has for its object any activity, which is punishable under Sec.153A or Sec 153B of the Indian Penal Code, or which encourages or aids persons to undertake any such activity.” This “unlawful” cap seems to be a perfect fit for Dr. Naik as well as his Peace TV Channel.

While an individual or an association declared “unlawful” under the UA Act, 1967, has no specific punishment with regards to the closure of its establishment, anyone dealing with the “unlawful” are susceptible to action. More importantly, Sections 7 and 11 of the Act provides for financial penalties, which are a little complex to elaborate here. Suffice it to say that the Peace Channel and its users could land in a financial soup, if they acted too smart after being declared as “unlawful” by law. And one hears that the Union government is considering a crucial amendment to the UA Act.

However, one is somewhat pessimistic about the success of the Centre in this Naik saga. For one, the man can afford the best of all legal counsels in India, who can find a loophole in any evidence offered in any court. Secondly, the UPA government did not react to Mumbai Police Commissioner’s Report of 2008 against Dr. Naik, possibly because of its obsession with appeasement secularism and fear of the reactions of the oil producing sheikhdoms. The latter consideration may well put a brake on the present NDA government as well, what with the Prime Minister himself striving to be in the good books of some of the petro-rulers. Remember, the USA itself doesn’t seem to have done anything at all to punish Dr. Naik for all that he spoke about the US and its former President George. W. Bush.