Worship and the Holy Dogs of modernity 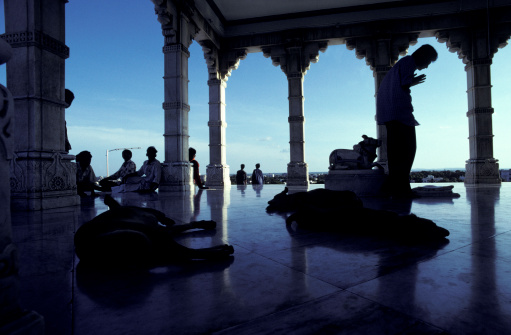 One of the biggest strikes of Christianity and Islam against pagan and dharmic traditions is that of “blasphemy” or “shirk.” No bigger shirk than having companions for Allah or that of “idol worship”—that is of worshipping something other than the “One True God.” Worship is reserved for this “True God”, who is transcendent and must not be represented in physical form. The heathen, the kaffir, errs in precisely this—“worshipping stones” or “but parasti.” In the more fundamentalist variations, a whole host of behaviors natural to dharmics are rendered shirk, including touching the feet of one’s elder, saying “bharat mata ki jai,” and so on. The worst part is the heathen, in his blindness, takes the idol to be the Supreme Creator, and doesn’t know the difference. Thus, liberating the heathen from the worship of false gods becomes a holy war for Christianity and Islam.

The Abrahamic concept of worship is self-referential and incomprehensible from the Dharmic standpoint. Worship is reserved for the true god, and that which one does to the true god is worship. How does one know what proper worship is or even “worship” itself? Well, God himself has set this out through His revelation. Worship is thus theologically grounded in revelation; this concept is inaccessible from the outside. But, what kind of act is “worship” and what is not? Is bowing to a stone worship?  How about kissing it? How about kissing a baby’s feet? Touching an elder’s feet? How does one know that the pagans, the dharmics, are even engaged in worship, albeit to false gods?

There is a Hindu tradition of astra-puja, or ayudha-puja, translated as “worship of tools.” Tools are placed on high, vermillion is placed on them, hands are folded, mantras are chanted. Is this worship? From the Abrahamic point of view, it is, and is both shirk and foolish. Heathens are so stupid that they worship inanimate tools; and they mistake the tools for the Creator.  Touching the feet of parents is similarly rendered problematic. However, kissing the black stone in the Kaaba is apparently not “worship”, since worship is reserved for the creator in Islam, and therefore that act isn’t worship.  But they know that Hindus bowing to a black stone is worship. If that heathen is not worshipping, what else is she doing?

From the dharmic darshan, there is no “worship” which is distinct from “honor and respect.” Puja honors a relationship. A relationship with one’s parents is worthy of honor; they are pujaniya. That relationship is honored with a certain ritual, signified in the gesture of feet touching. A craftsman has a relationship with his tools. Just like moderns have “Mother’s day”, a “Tool’s day” is set aside to honor one’s tools. It is a reminder of the relationship with the tools, a reminder to use them wisely, to keep them properly maintained. The puja of tools is thus an important reminder and honoring of that relationship. A chainsaw is to be treated with a certain respect, as is a chisel. Similarly, the notion of the earth (or of one’s country) as a mother is to honor our relationship with it, and that honor may lead to protecting it ecologically, or from foreign elements. Rendering these acts as shirk by Abrahamic theology, since “worship” is reserved for the creator, is incomprehensible to the dharmic traditions. Abrahamic theology works on its own internal logic, not accessible from the outside.

There is another way in which astra-puja or murti puja is unproblematic for the dharmic traditions.  Ashtavakra Gita, for instance, says “everything that exists is Brahman.” Advaita implies that there are “no two.” That is, the sacred and the profane, the world and Brahman, the Self and the Paramatma are not “really” distinct. In that sense, the tools, one’s parents, the earth, the sun, a river, a tree, are all part of the divine and one can “worship” them just as one would worship the divine. That which is life-giving, life-supporting, is pujaniya, worthy of puja. The tree gives shade and fruit, the river brings life-sustaining water and carries away pollution, a cow gives milk, and even its dung is useful in the agrarian ecology. A cow is like the member of the family, much more important than the “pet” in modern life. It is honored, respected and loved. It is decorated and protected. Yet the “Holy Cow” is mocked as the “liberal-secular” ethos extends Christian theology in its distaste of “worship” of an animal. But the cow, like everything else, is also part of the divine, and as a life-supporting essence is worthy of honor, respect and love.

The modern paradox is this. While modernity mocks the Holy Cow, its action towards “pets” is similar.  A pet dog is treated as a family member in modernity, often kept inside the house—even “Holy Cows” rarely get that honor in India.  Dogs and cats are cuddled and kissed, decorated and doted upon and special beds and cushions (altars?) are kept for them. Horse meat is taboo. For pagan eyes, it is no different from acts that are labeled “worship.” Hindus have “Holy Cows.” The West has “Holy Dogs.” In the West, the human worshippers of the Holy Dog even follow the regal canines around scooping up holy shit—dog poop—so it can be properly disposed of. If an alien observed the behavior of rural Indians collecting cow-dung and a Westerner picking up dog-poop, their behaviors would be difficult to differentiate, except that the cow-dung is much more useful, while dog-poop is just thrown away.

Just as cow-meat jolts the sensitivity of many rural Hindus, dog-meat, cat-meat or horse-meat often disturbs Western sensibility. Thus, we have the “modern liberal” Indians, often just ‘mini-me’s of Western pop-culture, lead campaigns against the Chinese Yulin dog-meat festival, while turning their nose at the “backward” Hindus protesting the killing of cows.  This liberal is not liberated, but an automaton following certain imported ideas, with little independent insight. They wouldn’t be able to explain why their sensibility gets exercised on dog-meat, but not on cow-meat, for instance. It just is.

It would still be workable, if the ChristoIslamic concept of “worship” and corresponding blasphemy and shirk would remain an internal concept. As something internal to their theology, it need not concern others. However, both Christianity and Islam are totalitarian and expansionist. They claim that the revelation they believe is not only for them, but for all mankind and all mankind must be evangelized to accept it. The heathen, the kaffir would not need to have an opinion on Christian and Islamic theology, if the latter did not have an opinion on her. But they do. And it is a derogatory opinion of the former’s belief motivating an erasure of the improper worship of “false gods” of the heathens.

If we use the pagan notion of “honor and respect” to replace “worship” we can have a fresh understanding of what pagan “gods” are. “Gods” are what that native culture honors and respects. This turns Christian and Islamic evangelism and expansion into a destructive force for native societies. Native rituals are attacked as “worship of false gods” and these must be denigrated and destroyed in the conversion process. But, what a native culture honors and respects, their “gods”, are intrinsically linked to native relationships, ecology, family and society. Abrahamic conversion disrupts this ecology and then aims to replace it with its “theologically correct” artificial institutions. The greater the disruption, the more the “service” provided by these institutions. This is perceptively captured in remarks by Jacob Zuma, South Africa’s first Zulu president:

“As Africans, long before the arrival of religion and [the] gospel, we had our own ways of doing things,” he said. “Those were times that the religious people refer to as dark days but we know that, during those times, there were no orphans or old-age homes. Christianity has brought along these things.”

Secular modernity, an expansion of Christian theology, has a similar impact. The liberal state must protect individuals and make human relationships- sons taking care of parents, parents looking after children- more and more redundant. The state must step in to ensure child support, prevent child abuse, provide old age homes and so on. Extended joint families also mean fewer houses to build and fewer gadgets to sell, so “freedom” must favor nuclear family and even further, single-parent families. Baby-sitters must replace mothers & fathers, who need to work outside. Parenting does not count towards GDP growth, atomized single-parent families do. And as natural relationships disrupt, a Westernized modernity hangs on even tighter to the one thing they can count on and worship. Their Holy Dogs.

Notes. This is not meant to target dog lovers, East or West, but meant as a cross-cultural examination of stereotypes and religion.  The phrase “The Heathen in His Blindess” is a bow towards Balu’s eponymous book, which has been a key influence. I’d tweeted Prof. R Vaidyanathan speaking of commercial interests driving push to nuclear families.