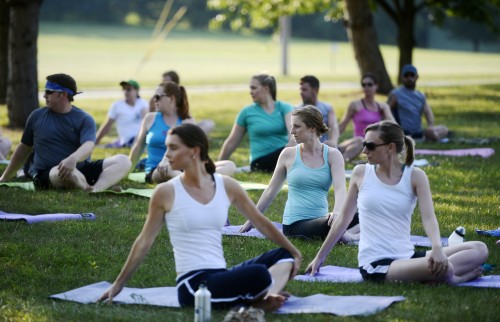 In her recent article in The New York Times titled “Yoga Teachers Need a Code of Ethics”, Sarah Herrington makes a case for a need for “Code of Ethics” for Yoga teachers in the current aftermath of scandals involving Bikram Choudhury, John Friend and Amrit Desai. According to her, the 36.7 million yoga practitioners nationwide, of which 72 per cent women, are prone to sexual harassment at the hands of certified Yoga teachers, who fail to follow Yoga Alliance’s “Code of Conduct” or any other self-imposed “Code of Ethics”. Exploitation by Yoga teachers has left students spiritually, emotionally, mentally and physically violated. So, she prescribes an “Ethical Code”, as a solution.

Sarah has the right intention, but unfortunately proposes a misguided solution. By advocating for Ethics in Yoga, she perhaps does not fully understand Yoga, despite her experience as a practitioner of Yoga. Yoga is a set of practices that leads one to integrity and authenticity. The problem is not a lack of ethics as such, but a lack of Yoga in the Yoga community. To become certified as a Yoga Teacher, all you need is: 1) some interest in Yoga; (2) the capacity to walk into a Yoga Alliance certified Yoga Studio; and 3) 200 hours of your time. That’s all. Now, you can start teaching. Contrast this with the way Yoga was taught, traditionally. Before the American industrialization of Yoga, heightened levels of integrity and sacredness came as part and parcel of immersion in the practice and was provided for by the practice itself.

Unfortunately, most of the Yoga teachers in the US do not even fall in the first category. They are complete beginners with very shallow priming in the Yoga Sutras or Bhagavad-Gita. They do not fully understand the theoretical aspects of Yoga. Neither do they appreciate its sacredness. This is because, in the US, Yoga like everything else is commoditized and packaged to sustain a 16.1-billion-dollar industry. Just because the industry is flourishing, it does not mean that the quality of “Yoga as a practice” is protected. A good example is that of the food industry in the US, where the size of the industry has not resulted in the provision of nutritious food to its consumers. This aberration has taken place despite strict regulation, including various ethical codes. When profit is at the heart of the things, there’s always a workaround. However, consumers are now becoming increasingly aware of the food they are eating by relying on labels. The organic standard, for example, helps one decide what to expect and whether to eat or not eat a food product.

Yoga on the other hand, lacks such labelling. The mere certification to call it Yoga, does not make it an authentic or desirable Yoga experience. With Yoga, it is nearly impossible to determine what one is getting into without investing significant time. By the time one learns the difficult lesson (pun intended), it is too late. Hence, the awareness needs to come before one even signs up to join a certain Yoga community. Also, the secularization of Yoga, has disconnected Yoga from its roots and lineage, leaving it dry and lifeless. We now have Yoga communities like: BeerYoga; Broga (Yoga for Men); Doga (Dog Yoga); and inthespirityoga (Yoga Studio and Wine Lounge). As Sarah would agree, even if you introduce a “Code of Ethics” to these Yoga communities, it may still ultimately lead to disappointment for its members, given the distortion. Innovation too, has it limits. Turning a holistic system into some catchy institution without any essence is corruption, a ridiculous reduction, and certainly not innovation.

Sarah, as a practitioner of Yoga for 20 years fails to bring out the very ethics that should stem out naturally from one’s Yoga practice. For example, Ashtanga yoga means “eight-limbed yoga,” as outlined by the sage Patanjali in the Yoga Sutras. According to Patanjali, the path of internal purification for revealing the Universal Self consists of the following eight spiritual practices: Yama (moral codes); Niyama (self-purification and study); Asana (posture); Pranayama (breath control); Pratyahara (sense control); Dharana (concentration); Dhyana (meditation); Samadhi (absorption into the Universal). The very definition of Yoga is “Chitta vritti nirodha” (“Yoga is the silencing of the modifications of mind”).

Yoga teachers who cannot consistently silence their minds, should not teach Yoga to others. Addressing Ethics in Yoga via quasi Biblical commandments is a futile exercise and, in fact, it can be argued that it is disrespectful to the Yoga Sutras of Patanjali. Such a proposition suggests that Patanjali, though a wise sage, somehow missed out on these external ethical dictates that ought to have been incorporated in the Yoga Sutras. Bringing ethics to Yoga is like trying to extinguish the extinguisher, defying the very purpose of Yoga. The reason more and more people are drawn to Yoga is because they are tired of living a life full of commandments and rules. Yoga helps them realize their Dharma i.e. their own version of righteousness.

The Patanjali Yoga Sutras, already have an ethical system imbibed in them, and have continued to do fine without any external commandments, when practiced sincerely. The Yoga community in the US needs to prioritize its integrity to the very practice of Yoga. That means, Yoga teachers need to do Yoga. The ethics will follow thereafter.

We don’t need to rely on Karma alone, when there is Dharma.