The Zombie lies of Left-Liberals 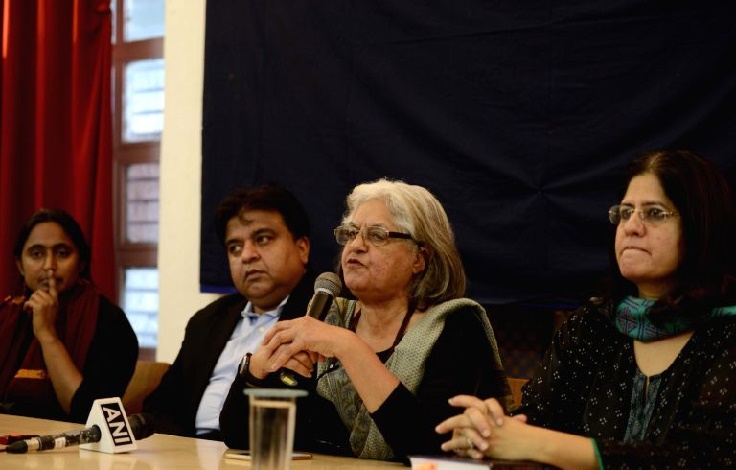 In the aftermath of the extremely acrimonious debate over the Obamacare bill in the United States, talk show host Bill Maher coined the term ‘zombie lies’ to denote those points that the Republican party refused to stop talking about, despite being proven wrong time and again. Zombie lies is what politicians stick to when they refuse to acknowledge something, which is called observable reality.

On our side of the pond, our left liberal community is terminally afflicted with the disease of telling zombie lies and a few incidents in the past week or so merits a new discussion of this phenomena in the Indian context and its effects on the social discourse.

Lawyer’s Collective Supremo Indira Jaising has been pulled up for alleged FCRA violations and the license of her NGO has been cancelled. The allegations about financial improprieties against Ms. Jaising are fairly serious (including getting paid a sum of nearly a crore, while being the Additional Solicitor General, a clear conflict of interest) and yet the first and so far the only reaction from the liberal community has been one of condemning the government for allegedly witch-hunting against the lawyer for her stand against the PM.

A few months back, when CBI issued a warrant against activist Teesta Setelvad, Indira Jaising wrote a scathing article full of zombie lies, in the Times of India, alleging that the government’s actions were vindictive due to Teesta’s activism in the Gujarat riots cases. Now, some of the liberal cabal has returned the favour by signing a letter calling the action against Jaising’s NGO as “stifling dissent.” This is the circle of civil rights activism, where one hand washes another.

Here is what is wrong with it-

1. Other than the perfectly legitimate action taken by the Government for breaking laws, these activists have given no other proof of witch-hunt.  It pains me to remind the Supreme Court lawyer that the prosecution has to prove intent only on part of the criminal. The courts will not ask the prosecution what motivated it to open the case against a criminal if the evidence is in order.

2. Second, ever more shocking, argument seems to be that the financial excesses should be like a perk given to the civil rights crusaders in exchange of their work in their chosen area of work.

There are wo things wrong with this line of argument- first, that is not how a civilised society works. You can’t award yourself lawlessness as a perk of upholding the law in some other parts. And second, accepting this argument, even once, will send the message to every law breaking, tax avoiding scumbag out there- Want to get away with a little white collar crime? Start a crusade against the government! Is that the kind of society we wish to create?

But that is how the zombie lies work. If you point out to any of the 150 signatories on the letter that Ms. Jaising’s work in one area does not exempt her from laws applicable to all, you are most likely be called a Sanghi troll. Tomorrow, if a court, following all its procedures and giving Ms. Jaising every chance to defend herself, finds her guilty and gives punishment, these liberals will be up in arms, protesting ‘miscarriage of justice’- done by carrying out the letter of the law. I hope this makes sense to someone, it surely doesn’t to me.

A second example of these zombie lies concern my friend Shefali Vaidya, and her online clash with the members of Congress IT Cell and its spokesperson.

Somebody created a fake Facebook profile with a name similar to Shefali’s, and posted a ridiculous post showing the Great Wall of China as the wall Modi is building between India and Bangladesh. Immediately, Gaurav Pandhi, the head of Congress IT cell, posted the photo and made fun of how ‘Sanghis’ were trying to pass off China’s wall as our own.

When the post came to Shefali’s notice, she immediately posted it on her own social media feed, and informed all that it was obviously a fake post. She need not have, anyone who has subscribed to her newsfeed for even a month would know, she is no rumourmonger. What happened next was nothing short of shocking.

Shefali wrote a tweet expressing her anger at Gaurav sharing such a blatantly fake post. Instead of showing contrition, and apologizing, Gaurav went on offensive and told Shefali, she is not a big personality (whatever that means) and called her a ‘nonsense Sanghi, a nincompoop!’

Meanwhile, Congress spokesperson Priyanka ‘I-don’t-talk-to-RSS’ Chaturvedi had shared the fake post with a snarky comment. When Shefali responded to her, and pointed to her that she was sharing fake posts, Priyanka responded with slander by saying there is not much difference between a fake profile and a real one.

In a nutshell, this is the left’s strategy to survive the online world- lie and spread libellous propaganda about your opponents (very possibly by creating such fake posts first), and when you are caught with your pants down, get snarky, use derogatory terms like Sanghi  and troll. Life becomes so simple once you take truth and shame out of the equation, you see.

But, this is not the first time that the left-liberal community have resorted to zombie lies. Two prominent zombie lies have been circulated again and again in the recent years: One, Narendra Modi engineered the Gujarat riots or was at least complicit in it. Two, Saffron Terror is the greatest threat facing India today.

Let’s take the first one that Modi engineering Gujarat riots. The fact is he did not. The Special Investigation Team set during the regime of his political opponent have given him a clean chit. As of today, there is no case against him with regards to the riot. And yet, come election season, every left liberal worth his/her salt will talk with the surety that has no connection with the evidence at hand. Regarding the so called ‘Saffron Terror’, the less said the better. Recently, the charges against Sadvi Pragya Thakur in connection to 2008 Malegaon blast was dropped by the NIA. Serious discrepancies in the arrest of Col. Purohit has also come to light.

Further, the very assertion that Saffron Terror is a big threat to India has been rubbished by Rupa Subramanya in her recent analytical piece, wherein she shows that the Left sponsored terrorism and Islamic terrorism are the major threats to India and compared to them, the so called Hindu Terror is minuscule. And yet, has one journalist, who screamed hoarse over the saffron terror has recanted his lies, has one left academic frothing at the mouth over the ‘extremist’ organizations like RSS have apologized? You must be kidding.

This cannot continue folks. One side simply cannot keep telling lies in the loudest voice possible, even when those lies are called out, rebutted, disproven and rubbished again and again and again. Imagine a tennis match where one of the players seeks the hawk’s eye review, finds out his shot was long after all, calls the cameraman operating the hawk-eye ‘Sanghi’ and insists that he be rewarded the point anyway. No sane society can function like this.

Zombie lies have brought the social discourse to a virtual standstill, where no proof is enough for the other side to change its opinion. I don’t deny that similar liars exist on the right side of the ideological argument as well, but they are mostly the fringe leadership and the soapbox preachers. The brazen way with which left has mainstreamed and institutionalised zombie lying as a way of communication is truly frightening.

In the age of social media, getting away with a blatant lie is becoming increasingly difficult. It should therefore occasion as no surprise that the biggest vocal critics seeking regulation of social media often come from the left. In my childhood, I read a story about a farmer who thought the sun rose because his rooster crowed at the dawn. The Farmer one day decided to keep his rooster under the covers thinking the sun will not rise. Left’s desperate attempt to muzzle free speech on social media has the same delusional, narcissistic ring to it.

Why should we care then?

We should care because today’s volatile world requires opposing ideologies to keep each other honest. If the left keeps ignoring empirical evidence against their beliefs, and keeps up its rhetoric, very soon the incentive of the right to offer evidence proving them wrong will be taken away. Whether the left accepts it or not, theirs is an unpopular cause right now. It will be disastrous for them to compound their lack of popularity with their lack of accountability.

People do not like zealots who cannot be persuaded to change their view by hard facts. It will only be a matter of time before people on the right shrug, and simply start ignoring all the arguments from the left, because countering those arguments is such a frustrating, futile exercise. And in any ideological sphere, when the debaters step aside, the demagogues step in.

So my liberal friends, please remember, pointing facts that counter your statements is not trolling, and abusing your opponent seldom takes the validity of their argument away. The reason your posts and tweets get slammed on social media is because at this point in time, you are hopelessly outnumbered. And you are outnumbered because for too long you have been exercising ‘if you don’t have bread then eat cake’ kind of insensitivity towards the masses. Solution to this is not controlling social media.

Here is a revolutionary idea guys- when someone proves your belief is false, stop telling it. That is kind of how rational people roll.