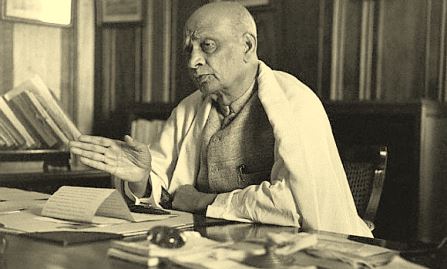 Assertion: The latest cover story of Frontline is a lengthy essay by A.G. Noorani that purports to prove that Sardar Vallabhbhai Patel was a communalist based on a “documented record.”

As part of this exercise, Noorani quotes from Justice J.L. Kapur’s report that was published after conducting an investigation into Mohandas Gandhi’s assassination. Equally, the article also provides an excerpt from Page 162, Volume 1 of the report, which the article claims, contains Jayaprakash Narayan’s (JP) “criticism” of Patel as being a supporter of communal forces.

First, we need to quote the highlights of the Frontline extract of J.L. Kapur’s report.

“According to the Times of India, dated February 18, 1948, Ex. 242, Mr. Jayaprakash Narayan said that the people should not distrust the campaign that he had undertaken to draw pointed attention to the weakness of the Central administration:

‘He had nothing to benefit personally, he said, from a frank and free criticism and an over-all estimation of the events leading up to Mahatma Gandhi’s assassination. He was no believer in fate and was convinced that, if prominent Congress Ministers had not patronised and attended RSS rallies and had warned the youth of the country clearly against joining the organisation and provided other suitable outlets for their energies, Mahatma Gandhi would never have been taken away from us when we most needed him…“He criticised the government for having spokesmen of big businessmen included in the Cabinet. He wanted the communalists and communal saboteurs to be replaced by democratic minded nationalists.

“In the Bombay Chronicle of February 28, 1948, Ex. 243, is given a report of a speech of Mr. Jayaprakash Narayan at Bombay where he demanded the resignation of Dr. Shyama Prasad Mookerjee, Mr. R.K. Shanmukham Chetty, Sardar Baldev Singh and Mr. C.H. Bhabha. He blamed the Central Cabinet for encouraging communal organisations in the country which resulted in Gandhiji’s murder and demanded the banning of communal organisations.”

Based on this extract, Frontline concludes that JP was

…clearly referring to Patel’s praise for the RSS and the Hindu Mahasabha on January 6, 1948, shortly before the dastardly deed on January 30, 1948.

However, things take on an entirely different light when we examine the complete text of the same Page 162 of the Report. The complete text of J.L. Kapur’s Report can be accessed here. Highlights of the missing text of Page 162–that is, omitted by Frontline–follow (emphasis added):

12C.8 Mr. Jayaprakash Narayan then said that a man of 74 [Sardar Patel] had departments of which even a man of 30 would probably find it difficult to bear the burden. He said that there was too much burden on the Home Minister but added as a suffix he was not censuring him.

Second, the Frontline extract ends at “…demanded the banning of communal organizations.” However, the text that follows is highly revealing:

He said that he did not demand that the socialists should be included in the cabinet but there were a number of nationalists who could be there and the portfolio of Information and Broadcasting should be separated from that of Home otherwise it will result in dictatorship. He said that he was not against Sardar but he wanted a man who was free from communalism to be incharge of Home Department.

But there’s more. Frontline also hides another crucial fact regarding JP. The testimony of Sardar Patel’s daughter, Maniben, recorded on the same page 162:

12C.14 Miss Maniben Patel deposed before the Commission that Mr. Jayaprakash Narayan and the Socialists were anxious to have Sardar Patel removed.

The implication is clear: that JP had political and/or ideological issues with Patel. This is common in any party where members of the same party differ with each other on certain issues. That by itself cannot make one leader a lesser human being. Thus, JP’s issue with Patel is not a fact but merely a disagreement, an opinion, which Frontline uses as proof to call Patel a communalist.

In other words, Noorani has deliberately suppressed quoting the page 162 in entirety because doing so would contravene his own charge that Patel was a communalist.

This apart, things become even clearer when we examine the documented record of Sardar Patel’s attitude towards Muslims.

Subsequent years proved the truth and soundness of what Patel had told the Muslims in January 1948 at Lucknow. Jayaprakash Narayan repeated that advice nineteen years later, in 1967, when he asked the Indian Muslims not to forget that ‘Partition had left a deep wound’ in the hearts of Hindus; and reminded them that ‘many of the Muslims and Muslim leaders who had made India their home…were passionate advocates of Pakistan’, on account of which there was still ‘so much mistrust in their heart.’ Narayan emphasised that ‘the healing of hearts and minds will not depend only upon the behaviour of the majority community.’ Narayan’s warning was, “We do not realise on what a veritable volcano of disruption we are sitting. We also tend to forget the history of our country from ancient times down to the British Conquest.” And Narayan repeated what Patel had said in 1948, “I fear that what I am saying may arouse bitter anger…. I am speaking as a friend, as one who is deeply concerned about the future of Indian Muslims, and of the future of our country as a nation.”

Patel’s advice was as ‘a friend of the Muslims.’ Patel had attempted to reach the core of the problem, and find a solution as a rational secularist: a solution based on his fundamental belief in what he had once said, “A nation forgets the lessons of history only at its peril…. It will be a folly to ignore realities. Facts will take their revenge if they are not faced squarely and well.”  [Sardar Vallabhbhai Patel–India’s Iron Man, by B.Krishna, p 461]

This was the same Jayaprakash Narayan whose words Noorani and Frontline quote as proof that Patel was a communalist who hated Muslims. Equally, this was the same Sardar Patel who reached out to Indian Muslims as a friend.

From the foregoing facts, it is clear that A.G. Noorani and Frontline have deliberately suppressed historical facts related to Patel and JP. The tone and tenor of Noorani’s piece seems to be that he has already arrived at the conclusion that Patel was a communalist and has both used facts selectively and suppressed facts to suit this conclusion.

IndiaFacts verdict: A G Noorani is an Incorrigible Liar.

Postscript: IndiaFacts is grateful to Sridhar K Swamy for his inputs in preparing this Fact Meter.