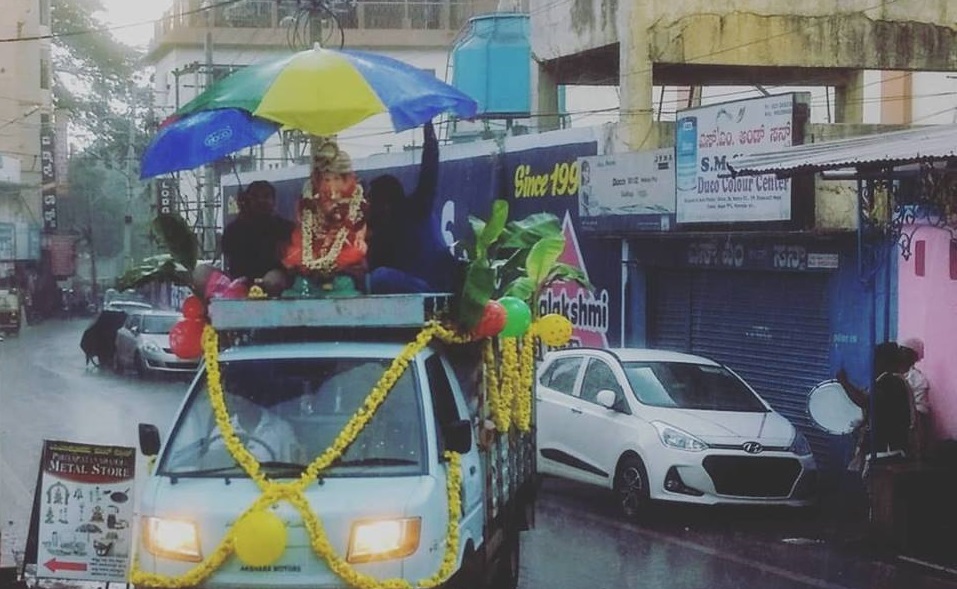 The day saw a heavy downpour in Mysore, Karnataka. It is a rather old city in South-Western India, where the weather behaves like a capricious teenage girl. Within what seems like a matter of minutes, a sunny day may change into a most gloomy outlook, resulting in a torrential downpour. Afterwards, it doesn’t take very long to get back its sunny air.

Incidentally, it was also one of those days when, post-Ganesh-Chaturthi-celebrations, the pratima or murti of the Elephant-headed God was to be immersed in water. The process – which entails an elaborate, colourful and noisy, overall exuberant procession – is known as Visarjan. The word is an antonym of sarjan (a variant of srijan) – the Sanskrit term for creation. As such, it may roughly be translated into English as dissolution – an apt substitute in my opinion, as the clay murti of the God literally dissolves into the water – typically that of a river, in which it is duly immersed, following a sacred ritual at the very end of the celebratory procession.

Varuna, the Vedic god of waters, and Indra, the Lord of the gods – the Vedic divinity controlling the clouds – seemed to have colluded with each other on that particular day to bring about the heavy downpour, of which mention has been made earlier, causing the dark waters of the river Kaveri to swell. It seemed that this was done with a mind to mete out poetic justice to this special occasion where water must be available aplenty, to see to it that the Visarjan is well done. It was thus that Vinayaka, the Beloved Ganapati, the Lord Leader of the masses, was welcomed on his way back to the Unmanifest by the twin Vedic deities who oversaw the ephemeral stay of the Lord in the plane of the manifest. It was as if the Indra-Varuna duo had taken it upon themselves to oversee the Lord’s safe transit from the mundane human plane to a plane beyond. Who else could claim the role of overseers of such divine transit but these gods, for they are, after all, situated midway between this earthly plane and the Abode of the Immortal, the Eternal.

To serve the Lord – and to serve him well, Varuna had transformed himself into arrows made of icy cold droplets of water, while Indra took his great bow of many colours – the Indradhanush – up in his hand. The humans, on their turn, tried their best to perform the duties ascribed to a good mortal. Being the pagans that they are, being the lovers and worshipers of all Nature, of the sacred cosmos, of the mysterious but manifest universe that they are, the humans tried to save the Crowned Head of Ganesha from Varuna’s passionate arrows shot down from the sky by the reverent Indra, who meant no harm but, out of reverence, wished to expedite the process of the Lord’s dissolution into the five elements and beyond. Humans, acting within the means available to them, held sprawling umbrellas over His manifest form. Thus the various expressions of bhakti from gods and men came into direct clash with each other: such overzealous bhakta-s – devotees – they all are. The Lord smiled, a most resplendent and indulgent smile, upon all his subjects – man and god alike – from within His manifest, serenely handsome murti, the lotus palm of His Right Hand stretched out in a gesture of bestowing divine blessings, prosperity and protection from vighna-s, i.e. any disruption whatsoever. After all, it is not for no reason that the Lord is known by the name Vighnaharta – the destroyer of impediments. As Lord Protector, He let each of his devotees play out their part in His Cosmic Play, guaranteeing that their individual parts, though they may contradict each other, be played out well, freely, and without interruption. The order of balance was thus maintained by Him in the perfect chaos.

Being intimately familiar with chaos in this way, knowing what chaos truly is, and dwelling in chaos all through their lives as one lives with a cranky parent/spouse/sibling, still going about doing one’s daily chores unperturbed, no Hindu god nor any Hindu mortal was ever known to be weary or fearful of chaos.