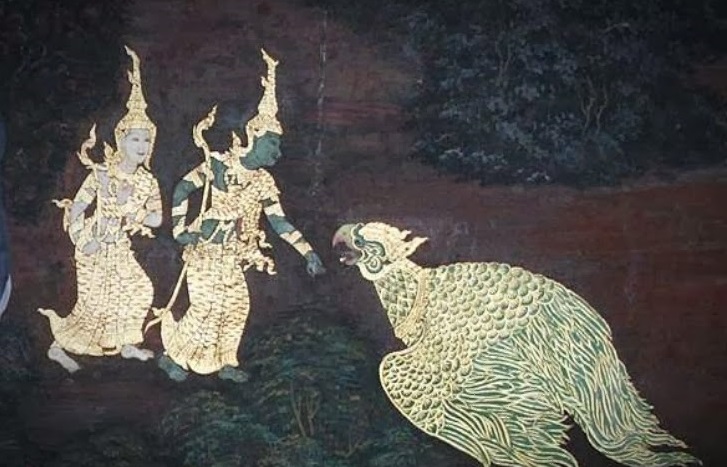 In India, Shri Rama may have been relegated to a small enclosure dubbed as Ram Lalla Mandir in Ayodhya, his place of birth, but outside India, Shri Rama lives in the hearts and minds of people as a true Lord deserves to. Lord Rama is revered as Maryada Purushottam or the ideal Man in Thailand and his dominion is considered by people as Rama Rajya or the ideal state. After my recent trip to Thailand, I was humbled by the way in which pre-Islamic Hinduism still survives in myriad forms in Thailand and in many other parts of South-east Asia. It is not the fake Isvara-Allah tero naam idiocy or the weak and cowardly un-Kshatriya Hinduism propagated by Gandhi and Congress party, but pure unabashed unapologetic assertive dharma which thrives. It is not only Lord Rama, but also Indra, Brahma and Ganesha who are highly venerated in Thai culture.

In India, especially among English speaking elites of metro cities and English language mainstream media, Rama has become a curse word and stands for all things primitive, backward, patriarchal, barbaric and imaginary. However, they dare not say that Jesus or Prophet’s tales are nothing but imaginary stories. Politicians and socialites of Lutyens’ Delhi shudder at the very name of Shri Rama. The delicate sensibilities of our left-liberal friends of JNU and Jadavpur University are apparently hurt at the mere mention of Shri Rama’s name, and they rant, shout and protest at the very mention of Jai Shree Ram. The previous Chief Minister of Tamil Nadu, Karunanidhi had said:

“Who is this Raman (as Lord Ram is referred to in Tamil)? In which engineering college did he study and become a civil engineer? When did he build this so-called bridge? Is there any evidence for this?”[1]

In fact, in Mamata Banerjee’s West Bengal, common Bengali words containing the word Ram was replaced so that Muslim sentiments were not hurt. So Ram-dhanu (Rama’s bow or rainbow) was changed to rong-dhanu (a grammatically incorrect word) and noted educationists and academicians called it “language terror”. I wonder whether in her zeal to Islamize Bengal, she will also change Muslim festival Ramzaan to Wrong-zaan[2].

In Thailand, Lord Rama is the most supreme and respected name because it the name of their King. The King of Thailand is considered to be an incarnation of the Divine on earth, and by extension his name is to be revered and venerated. In India, we have roads, parks, schools, colleges, airports, and government schemes being named after bigots and fake personas, especially those belonging to a particular political dynasty.

Thai people, on the other hand are more sensible and Dharmic and hence, prefer to worship the real hero, Lord Rama and we see the name Rama everywhere. All kings in the current Chakri dynasty of Thailand are often referred to as Rama.

The name Ayutthya or the erstwhile Ayutthaya Kingdom (1351 – 1767) was borrowed from the name Ayodhya, and the kings were best known by the title Ramathibodi (“Overlord Rama”). The national epic of Thailand is Ramakien, which literally means the “Glory of Rama” and is derived from our Ramayana.

For somebody from Kolkata, where average city folks have utter disdain for Lord Rama and have more interest in chicken and rum, it was a humbling experience for me to travel on the beautiful Rama IX highway to and from Suvarnabhumi Airport.

Brahma is no longer worshipped in India except in one or two very small pockets like Pushkar. One of the main reasons for the decline of Brahma worship is postulated to be the Islamic invasion of India which wiped out Brahma culture, especially in eastern Indian subcontinent. Today, Brahma statues can be seen in some museums, not unsurprisingly in Bangladesh. The below photo is of an 11th century CE basalt statute in the Chittagong University Museum in Bangladesh. While Hinduism will quite likely become extinct in a few decades in Bangladesh, statues like the one below are proof that Brahma worship which is extinct today, was perhaps thriving before Bakhtiyar Khilji and other middle-eastern jihadi warmongers destroyed indigenous Dharmic culture of eastern India.

In Thailand, Brahma worship is thriving and an important part of Dharmic culture today. Brahma is known as Phra Phrom (from Brahma) and is regarded in Thai culture as a deity of good fortune and protection. Brahma is described in Puranas as having four faces representing four Vedas or knowledge coming from four directions: north, south, east and west, and Thailand despite being a predominantly Buddhist society venerates the four-faced God Phra Phrom. To clarify, in Buddhist epistemology, shabda pramana (or verbal testimony) of Vedas is not an accepted pramana (means of knowledge), yet Buddhists in Thailand as well as many Chinese Buddhists have not only embraced Brahma, but have also popularized the worship of Phra Phrom in recent times. Today major Phra Phrom temples and shrines in China and south-east Asia are:

In Thailand, Ganesha is called Phra Phikanet or Phra Phikanesuan and similar to Hindus, Ganesha is worshipped as the deity of success and the remover of obstacles. Ganesha appears in the emblem of the Department of Fine Arts of Thailand. There are numerous temples and shrines of Ganesha throughout Thailand. One may in fact see Ganesh statues in front of every hotel or business establishment (except the Muslim owned enterprises, of course)

Hindus may have forgotten Indra as the pre-eminent Vedic hero and remember him only as a secondary character in the Puranas. In Thailand, Indra is still a big deity and there are roads like Rama Indra Road (in Krabi) and Sringarindra (in Bangkok) and Indra Square shopping complex named after him. It is believed by Thais that the name of Bangkok was given by Indra and city was built by Vishvakarman.

The culmination of the trip happened in Bangkok, where I visited the famous tourist attraction Safari World, which consists of 500 acres of open zoo, Bird Park and Marine Park. People from all over the world throng to this major attraction and one can see a huge number of Indian tourists, along with Chinese, bearded and burqa clad middle-eastern and others. One of the major attractions is the Dolphin show, which is hugely popular and a massive crowd puller. When we entered the podium and took our seats, the host, a native Thai was singing what I assumed was a popular Thai song. He followed this by another famous Chinese song.

Then he sang a very popular Bollywood Hindi song dedicated to India, and the crowd rose up in excitement at the choice of the song.

The English translation of the song is provided below[3].

This country has brave young men who are carefree,

Friends, this country is great

This country is an ornament of the world.

Here the courageous people have a brave heart

Here the women have an innocent face

Here the lovers sing in joy.

There are gatherings in the colony

Our own people, whether Lutyens’ media, educated English elites, Dalit separatists, Dravidian troublemakers or Islamic fundamentalists in India, are constantly trying to demean, denigrate and destroy India, while a Thai person in front of entire world, salutes India and refers to India as the “ornament of the world.” [ये देश है दुनिया का गहना].

And the irony does not end here.

He ended the song with shouts of “Bharat Mata ki Jai”. Three times.

A Kerala Muslim family sitting beside us, refused to repeat the slogans and in fact seemed very irritated. I am quite sure there were many Muslims from India who kept quiet and did not clap along with the song or participate in the glorification on India. Many secular Hindus seemed also quite disturbed. I heard one Bengali family in front of us saying that this song did not represent us and shouting “Vande Mataram” was not our culture. He seems to have forgotten that it was a Bengali person, Bankim Chandra Chattopadhyay who had composed it in Anandamath as an ode to Durga as the Mother goddess.

This disrespect by many Indians for Dharma and the rather perplexing love for all things adharmic is why Dharma is in threat in India. To make India a Rama Rajya again, we must whole-heartedly embrace Rama in our own varied ways. We must embrace our Hindu heritage. We must embrace our Dharmic values.

Finally we should all proudly say “Jai Shree Ram!”