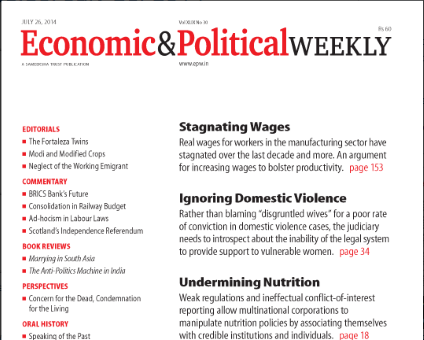 “The Intelligence Bureau and It’s not Very Intelligent Report on NGOs”  by a former Union Secretary is a very interestingly written article in the “Economic and Political Weekly” (EPW).

The article defines NGOs as follows:

“NGO – dedicated individual working selflessly among the people without any external support…or a foreign funded agency working in line with the donor’s objective. …several corporates have tried to leverage their donations to choke competition and create favorable markets for themselves.”

This issue dated 28 June 2014–5 July 2014 has more interesting pieces apart from the above-mentioned article. The issue has been published in two volumes.

The first volume comprises 670 pages and the second runs into 560 pages. The normal issue of EPW is around 100 pages. This issue also has almost the same number of articles like the rest of the regular issues of EPW.

So what does the rest of the pages of these mammoth volumes contain?

That leads to yet another question: who sponsored those advertisements?

The answer to that question forms the rest of this essay.

But first, let us look at the following table, which gives a description of these advertisements.

Needless, all of these are banks and none of these advertising banks are Indian. The grand total runs up to 1019 pages of just advertisements by a total of 27 banks.

The Economic and Political Weekly website (http://www.epw.in/node/19) pegs advertisement rates thus: Full Page Black & White rate at Rs 30,000 per page. So, even if we hypothetically assume that the advertiser obtained a discount of 50 per cent, then the total advertisement revenue earned by EPW will amount to One Crore Fifty Two Lakhs Eighty Five Thousand Rupees.

There are other one page advertisements in the issue, which are sponsored by entities such as HUDCO, Dena Bank, Cambridge University Press, O P Jindal University, Indian Institute of Banking & Finance and NSE.

I couldn’t get last year’s copy of the EPW issue published during the corresponding month, but I was told by friends who subscribe to it that EPW publishes one thick issue every year around this time but that it has never published two volumes in the past. This is the first time it has happened.

And then I looked at some other recent issues of EPW.

Typically, the objective of advertising is to reach the target audience of the advertiser. One wonders which target audience were these foreign banks attempting to reach by advertising in EPW. The other reason for advertising in EPW could be that some are statutory advertisements given to any low cost publication. In that case, there are several other publications whose costs are much cheaper than that of EPW. It also merits a deeper inquiry as to how all these foreign banks decided to advertise with EPW?

One possible reason that I personally suspect is this: the outgoing government made arrangements for the survival of EPW for the next decade or longer. Of course, there could be other reasons but given the aforementioned facts and the enormous sum of money involved, this suspicion is warranted.

“The Economic and Political Weekly (EPW) is a left-leaning weekly Indian magazine published from Mumbai by the Sameeksha Trust, a charitable trust. As of 2010, EPW has around 12,000 print and 1000 online subscriptions of which 5000 are institutions. In 2014, it is estimated that these numbers have increased to 13,000 print and 5,000 online subscribers.”

There are lessons and cautionary tales in this saga. The key lessons:

So, is that a big issue?

The issue is that both the publishers and the authors of nationalist or non-Left magazines struggle lifelong to survive.  It has reached a stage where some of these publications ask their authors to get advertisements in order to be published.

I hope some lessons are learned from EPW and a course correction happens.