A Year with the Maha-Puranas 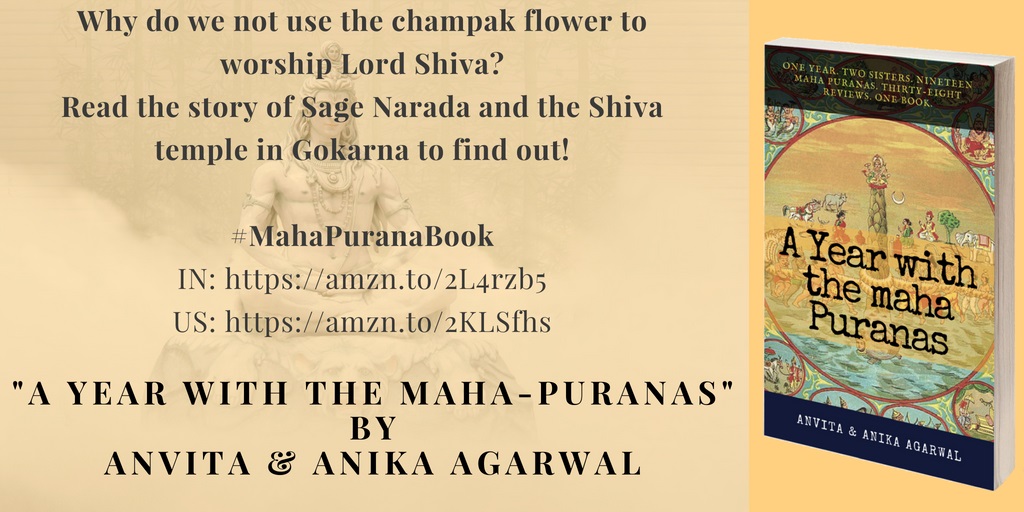 Why did Lord Shiva, at the instigation of Brahma, tease Parvati?

Why do we not use the champak flower to worship Lord Shiva?

In which purana would you learn about a prayer for Lord Vishnu to protect you in all four directions with his sudarshana chakra, koumodaki gada, sounanda hala, and shatana mushala?

Why did Sita mata curse fire, the river Phalgu, the ketaki flower and the cow?

Which Purana tells us the story of the lake that turned four black swans to white, and why?

Why did Draupadi have five husbands?

Do you have questions like these? If yes, you should check out this new book by Sisters Who Read. Titled “A Year with the Maha-Puranas”, the book is a compilation of reviews of 19 Mahapuranas by young sisters Anvita Agarwal and Anika Agarwal based in Bengaluru.

Here is an Introduction to the book, written by their father and IndiaFacts columnist Abhinav Agarwal

The entire corpus of the eighteen plus one maha Puranas is approximately four lakh shlokas long. At roughly 13 verses-per-page, that translates to more than thirty-thousand pages. What Anvita and Anika, the authors of this book, read instead were abridged English translations of the Puranas by Shri Bibek Debroy. Each translation is about twenty-five thousand words long, and therefore, a little less than one hundred pages in print length. These abridged translations would run into two-thousand pages in print-length, give or take a few, and this is what the two sisters read.

Why didn’t Anvita and Anika read the complete maha Puranas? That is a good question, and I do hope that as they grow older, they will read not only the unabridged maha Puranas, but read them in the original Sanskrit. At their ages, however, short and abridged English translations seemed the most practical alternative. While the reading was the primary motivation, I also nudged them to write short reviews of each maha Purana. The purpose was simple – writing is a second level of learning and it also gave them occasion and reason to go back to the Puranas and think more closely about what they wanted to include in these reviews. After some back-and-forth, both zeroed in on the format you will see for most of the reviews in this book – a brief description of the Purana itself, followed by two or three stories they found most interesting.

They did not read the Puranas in order, i.e., starting with the Brahma Purana and ending with the last one, the Brahmanda Purana. No, they decided to mix up the satvika, tamasika, and rajasika Puranas. Nor did they read at the same pace. After the first few months, Anika took the lead and maintained it till the end, and which gave her some reason to be happy. Or to gloat? Why Anvita lagged behind is something she has explained in-between the Purana reviews, in the anecdotes.

I have to thank Shri Bibek Debroy for these short and approachable translations. While he has expressed a certain amount of dissatisfaction with his translations, and I look forward to his marathon project that will see him do unabridged translations of all maha Puranas, his translations appeared when there was a need for them.

All these reviews were published on their respective blogs over the course of one year, from April 2017 to April 2018. For this book, the reviews appear in the order of the Puranas’ listing, starting with the Brahma Purana. There is some amount of anachronism that you will notice as you read these reviews, since the first Purana both read and reviewed, the Shiva Purana, is actually fourth in the order of the Puranas, and the review reflects that. They decided against making changes to the reviews since those changes destroying some of the spontaniety that existed at the time of writing these reviews.

Both sisters also wrote short anecdotes to describe their journey through the year that elapsed, from April of 2017 to April of 2018, when the last review was written. More than in the reviews, you get a glimpse of the personality of each.

As readers, I request you will excuse any errors they have made in their reviews and pray that they become wiser as they get older, and someday dive deep into the vast ocean of wisdom that the unabridged, original works provide.

“A Year with the Maha-Puranas” by Anvita Agarwal and Anika Agarwal is available on Amazon.