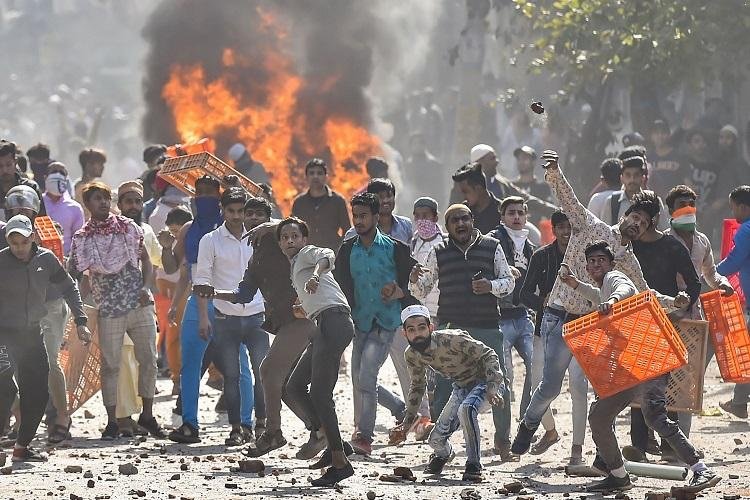 A Book Review by Prakash Shah

The writer is a Reader in Culture and Law at Queen Mary University of London.

LONDON (IDN) – Imagine that the UK parliament approves special legislation to fast track asylum applications by Christians and Yezidis from Syria and other areas occupied by ISIS. And then imagine the following set of events unfolding. Soon after the legislation is approved, students influenced by external actors begin protests, attack police, and occupy universities, requiring police action and arrests of the rioters.

In what are suspected to be coordinated manoeuvres by far-left and jihadist organisations, certain areas of Muslim concentration in the capital, London, are the scene of weeks-long protests accompanied by loudspeaker-amplified chanting that goes on into the night.

The protestors are told by organisers and social media messages that the government plans to deprive Muslim refugees of their asylum status and that mass camps will be built for them. Neighbourhoods, where the organised protests occur, are in close proximity to mosques. Arterial roads are blocked off so that commuting residents suffer intolerable traffic jams, while certain underground stations in the same zones get blocked off to commuters.

As a result, resident commuters cannot travel outside or get to work. Non-Muslim neighbours suffer from repeated acts of violence. Far left and jihadist organisations coordinate the protests by placing Muslim women at the forefront and arrange many speaking and performance events at which chanting hate slogans against non-Muslims becomes common.

Events take a turn for the worse when, in one of the protests zones, plans are made to block off another arterial road in emulation of moves elsewhere in the capital. The local residents object and tensions build up. Imams and the police try to persuade the Muslim protestors to withdraw but are attacked instead. Residents take matters into their own hands and violence erupts between the different groups. From some high-rise blocks, shots are fired at residents and the police. Some policemen and residents die as a result.

In a manner reminiscent of attacks against American forces in Iraq, it is as though the events have been carefully choreographed by external agents over the weeks leading up to the city’s worst riots in living memory. Residents are physically and mentally scarred and fearful of the future. The impression conveyed in the international media is one of police brutality against students and peaceful, mostly female Muslim protestors. The British authorities are condemned by celebrity academics worldwide and the UN’s Secretary-General.

Delhi Riots 2020: The Untold Story*, a book by Monika Arora, Sonali Chitalkar and Prerna Malhotra tells of just such a story of violent protests and riots. But they do not take place in London. They occur in India. The story is not an imaginary dystopic vision of a future Britain but relates the chain of events that occurred from mid-December 2019 to end-February 2020 in Delhi, India’s capital city.

The protests were ostensibly about the Citizenship (Amendment) Act 2019 (CAA). That legislation was designed to fast track the citizenship of those religious minorities from Pakistan, Bangladesh and Afghanistan already in India. It benefits just over 30,000 persons who, having completed a 5-year residence period in India, would be able to submit their application for citizenship upon the legislation coming into effect, rather waiting to meet the usually applicable 10-year requirement.

The intent of the legislation is benevolent and mirror legislation in countries around the world in as much as it makes concessions to specific refugee groups or targets of past persecution. The legislation doesn’t treat Muslims from the three countries as presumptively persecuted but neither does it bar them from qualifying for citizenship in the usual way. In all of the three countries, where Islam is the official religion, the non-Muslim populations essentially have second class status or worse, their numbers have declined considerably over the past decades, and those that remain are exposed to a series of human rights violations that only occasionally hit the headlines, as did the Asia Bibi case.

Daily acts of humiliation against non-Muslims in each country are well documented, even if considered unpalatable for polite discussion in politically correct circles. No Raoul Wallenberg has emerged to organise their exodus although some such initiative is now desperately required to rescue the remaining population who will otherwise disappear by forced conversions or by other means.

Criticism of the CAA is a clever manipulation to misrepresent its effect. Links were made to two other programmes in India – the National Population Register (NPR) and the National Register for Citizens (NRC) – which are of limited application so far. These are long-standing aspects of policy supported by successive governments and not some evil design of the Modi government.

Nevertheless, the suggestion that there was a plan to deprive India’s Muslims of citizenship was circulated with some success, often rebounding via international coverage of the issue. Although the authors do not address it, there may well be the backstory to why the NPR and NRC programmes got falsely linked to the CAA.

Ample anecdotal evidence suggests of mass influxes of irregular migrants especially from Bangladesh and Myanmar. It is widely suspected that many of these migrants have become part of Delhi’s demographic landscape given decades of non-enforcement of immigration laws. The rolling out of the two programmes would have impacted these influxes and the criminal networks that sustain them.

As in our imaginary story, the manipulation to make the violent protests and rioting appear justifiable occurred not only within India but externally too in the international media and in the way prominent figures in academia and the UN Secretary-General have made pronouncements criticising the Indian government for the CAA.

Such narratives were given added adhesion by other measures of the central government which became prominent topics of sloganeering in Delhi. One was the ending of any ambiguity about the status of Jammu and Kashmir, thereby cutting off prospects of a Muslim-led secession of the province. The other was the Supreme Court judgement in favour of rebuilding the once-destroyed temple at Ayodhya.

The book’s three authors were part of an original five women investigation team who, in turn, are part of a much wider Group of Intellectuals and Academics (GIA). Arora is a practising lawyer while the other four are academics at Delhi University.

The team had gone on an on-site investigation, talking to more than 20 people and visiting public institutions, including schools, destroyed in the affected areas. They document some of the cases of injury and loss of life by speaking to affected local residents. These accounts, together with pictures, are provided in a separate chapter which is drawn from a fact-finding report already published by the team of five.

Delhi Riots focuses in on the different stages of escalation with separate chapters for each development – from the universities, to the protest sites across Delhi, and then (after the February 2020 Delhi elections) to the events of late February that saw the worst clashes in specified areas of the city.

The book’s authors relate how the manipulation regarding the CAA and other programmes became a pretext and cover for mass mobilisation of student actors and especially Muslims, instigating them to acts of incivility that, in the worst instances, led to the loss of life of fellow citizens and the policemen who had tried to bring the violence under some control.

The forbearance of the police is remarkable as are their attempts to diffuse the threat of violence by enlisting the help of locally respected imams and mullahs. Such attempts at diffusion may be put down to field-level practical knowledge that police acquire over years. Only that, this time, in light of the different nature of the threat, such know-how seemed obsolete.

This points to the far more eerie dimension characterising the violence as well as the events leading up to it. The suggestion is made in various parts of the book that the way in which the events unfolded during those months provides grounds for thinking that unprecedented coordination made the violence quite unlike the periodic and rather more spontaneous communal incidents. The authors further suggest that the coordination must have come from the strategic involvement of far-left organisations, termed ‘Urban Naxals’ in Indian public discourse after Vivek Agnihotri’s book of the same title.

The Naxals, a Maoist group, are the largest terrorist network active in India. As Sankrant Sanu’s foreword to Delhi Riots 2020 points out, they have the dubious distinction of being the most murderous of terror groups. The term Urban Naxals isn’t arbitrary; the Maoists’ own playbook describes them as the civilian counterparts who work within Indian institutions, including academia. They are meant to support the rural cadres by providing propaganda, securing supplies and so on.

The other strategic involvement, they suggest, must have come from the jihadist network from within and outside India. It is these two main agents who appear to have coordinated by blocking off of transport routes in and out of Delhi; making material preparations for violent attacks in the affected areas; unprecedentedly placing women in the frontline of protests; securing the presence of non-locals at the protests, a finding which comes up frequently in the book; and killing security personnel brutally as though a signal was being sent to the state authorities.

These suspicions in turn lead to concerns about the security vulnerability, and the authors make relevant recommendations about these and others of their findings. In fact, even before the book’s release date, another Muslim riot hit India, this time in the IT capital Bengaluru. Suggestions have been made that its pattern mirrors Delhi in some respects.

Delhi Riots 2020 may have become yet another book on India’s periodic riots and its security vulnerability. Yet it has now catapulted to unanticipated fame. Bloomsbury India withdrew the book at the instigation of Bloomsbury’s UK headquarters after pressure was brought on the publisher. On the eve of the book’s launch in Delhi, the authors were told by Bloomsbury India that, while the publisher sympathised with them, they were compelled to withdraw the book. Bloomsbury’s behaviour has been put down to the persistence of British colonial attitudes.

This reviewer has written to Bloomsbury UK for an explanation but hasn’t received one. The book’s subtitle may have come true, with the story it tells remaining untold. The readership reacted, however, and another publisher, Garuda Prakashan, took the book on, with over 15,000 pre-orders being received on the first day.

While this book provides a disturbing account of events in Delhi, it is of much wider significance. The authors show that conventional policing cannot deal with the recruitment of a substantial section of the population to the service of civil unrest damaging to lives and property.

Their account also suggests that foreign intervention in India using criminal terrorist networks is at an advanced stage stooping to using what was meant as humanitarian legislation for refugee populations as a pretext for organised unrest and violence. If not met with a rapid and appropriate response, the perpetrators will get emboldened, and the tipping point into mass violence and civil war may not be far off.

Organised criminal networks will be drawing lessons from the Delhi conflagration but so must the Indian authorities. The international community, whose members have either remained indifferent to India’s plight or colluded in spreading fake news, must also decide what they favour: a flirtation with terrorism or mutual cooperation to beat it.

You may order this book online, here: https://garudabooks.com/delhi-riots-2020-the-untold-story