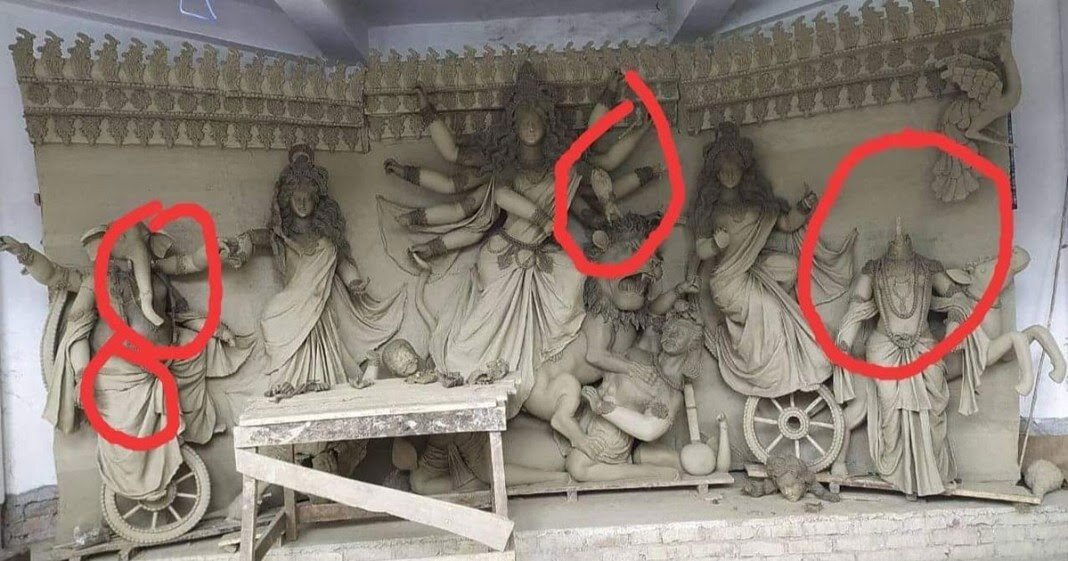 For Bonolata Das this Durga Puja marked the one-year death anniversary of her youngest son, 21-year-old college student Pranta Chandra Das, whom she allowed to stay in a temple complex – which ideally should be a safe place for anyone, anywhere. But not if the temple is in Bangladesh. This particular one was in southeast Noakhali District and her son was a victim of mob violence that began after rumors spread that the Quran had been desecrated at a Durga Puja Pandal in the town of Comilla. He was allegedly beaten to death there by hundreds of religious fundamentalists in the Muslim-majority nation.

For Bengali Hindus the world over, Durga Puja – the holiest and most important festival – promises lot of festivities, prayer, family gatherings, and joyous celebration. But that is not so for Hindus in the so-called “secular” Bangladesh, who are living in persistent fear of being systematically targeted, subjected to brutal atrocities, their Mandirs desecrated and priests lynched.

This sense of déjà vu keeps visiting Hindus there every so often, and this has been the case since 1947. Events reported from Bangladesh last year were just the tip of the iceberg. Around 4,000 incidents of violence against Hindus, who constitute less than nine percent of Bangladesh’s population, have been reported since 2013, according to the rights group Ain O Salish Kendra.

Bangladesh may have attained independence in 1971 from Pakistan through and because of India’s help but the modus operandi of the radical Islamists who seem to hold a sway in the country is way too familiar to Hindus, who were the primary targets of both the Pakistani Army as well as radical Islamists in the Bangladeshi war of liberation. Women raped, properties of Hindus forcefully expropriated, places of worship destroyed, men butchered – Hindus in Bangladesh have been paying the price of staying back in a country where religious fundamentalism keeps rearing its ugly head despite the governments since 1971 flaunting and claiming the secular tag.

An article in Hinduism Today highlights the plight of Sanatanis and paints a sordid picture of the gruesome genocide that ensued after the partition of Bangladesh, erstwhile East Pakistan, from Pakistan.

For the record, here are some statistics highlighting the plight of Hindus:

Bangladesh started out as a secular nation. However, in the late 1980s secularism was abandoned and Islam accepted as the state religion, only for the country to revert in 2010, mostly symbolically because nothing changed in terms of the ground reality. Minorities continue to be discriminated against while successive governments failed to protect their rights, properties, and lives.

This hate, targeted against Hindus, is so common that apparently news of atrocities do not even get reported, even in India, let alone the rest of the world!

Other than Pakistan, probably Bangladesh is the only country where Hindus have had to bear the consequences of being a minority. Until the late 1980s Hindus were evenly distributed in all regions with concentrations in Khulna, Jessore, Dinajpur, Faridpur, and Barisal districts. Their contribution to society was far in excess of their percentage in the population. Traditionally, they have supported the liberal political party Awami League. Its Ministry of Religious Affairs apparently supported Hindu institutions, and mandirs received assistance through the Bangladesh Hindu Kalyan Trust.

However, over a period of time, the political environment in Bangladesh deteriorated for Hindus with hardliners insisting on converting it into an Islamic nation where, as the world knows, minority rights, especially of “infidels,” are mere hogwash. Repeated attacks emboldened by local Muslim communities’ unbridled support to fundamentalists compelled Hindus to flee the country.

Bangladeshi Hindus are soft targets for radicals who react to events happening in India – be it an alleged “blasphemy” committed by Nupur Sharma or rumors of Muslims being marginalized/targeted through the Citizenship Amendment Act (CAA). The orchestrated violence has time and again targeted the beleaguered, hapless Hindus though the government says it too is fighting extremism.

While the world failed to take notice of this systematic pogrom, including previous Indian governments, the BJP-Government led by Prime Minister Modi government has had to walk a diplomatic tightrope balancing relationship with its strategically important neighbor, while managing an influx of Hindu immigrants and pressurizing Bangladesh to take stern steps against perpetrators of atrocities on Hindus.

Despite this being the 21st Century, ethnic cleansing is a real and present danger in many Muslim-majority countries. It is happening in real time with Hindus in Bangladesh. Unless the Bangladesh Government walks the talk and comes down heavily on perpetrators there is little hope for the Sanatanis of Bangladesh who are waging a lonesome battle to live and prosper in their original homeland.

Much to the chagrin of Bangladeshi Hindus who would have expected Indian politicians to speak up and raise a global alarm against the hostilities faced by them, a lone voice in the faraway Netherlands is doing all that is in his power to draw the world’s attention on their plight.

Geert Wilders, the founder of the national political party — Party for Freedom — in the Netherlands has been vocal about repeated attacks on Hindus by religious fanatics in Bangladesh and also questioned the silence of the Islamic world over the attacks. Silence, in this case, is complicity. That the Western world is also silent goes to show the hypocrisy if not the complicity of their foreign policy establishments, their media, and their compromised and blinkered academics.

Wilders has been creating public awareness through various tweets for the protection of Hindus in Bangladesh and India. “Hindus are attacked again by Muslims in Narail, #Bangladesh. They burn their houses, temples and shops. Why is the world silent? Why is Islamic violence against Hindus acceptable? It is not! Not in India, not in Bangladesh, nowhere! (sic)”, he said in one of his tweets.

Hard-hitting questions which every nation that values human life should be asked and have them answered! On the contrary, the liberal/progressive groups in Europe and the US have ignored and even countenanced Islamist violence and ethnic cleansing and made it a habit instead of taking a stand against what they call “Islamophobia.”

Be it Bangladesh or Pakistan, Trinidad & Tobago, or the United Kingdom, there has been an exponential rise in crimes against Hindus the world over. Targeted for their pluralistic culture based on humanity and freedom of thought, they have not been spared even on social media.

In the US, the Hindu American Foundation is fighting a rather lonesome battle to draw the attention of lawmakers towards this growing intolerance. However much, much remains to be done. Generating political pressure on governments to act strongly and swiftly could be the first step. Dealing with the plight of Hindus in Bangladesh should lead the effort!